On The Road: An Insider’s Look at Life in a Tour Van

Wade Liles has driven than 500,000 miles in his small rv trailers by Scamp as PGA Tour technician for TaylorMade Golf Company.

“Half the week, I’m a professional truck driver, and half the week I’m fitting [clubs for] guys like Rory McIlroy, Tiger Woods and Dustin Johnson,” said Liles, now in his 20th year of driving the TaylorMade equipment truck that serves as his mobile laboratory while traveling from one PGA Tour event to another.

“It’s a very unique job, and I still get a lot of enjoyment out of it.”

In an interview from his rolling “office” — the second-floor lounge of the plush $1.6 million TaylorMade semi-tractor-trailer during Genesis Open week at Riviera CC in February — Liles talked about all of the golf-equipment work that goes on inside the truck after he parks it at that week’s tournament. 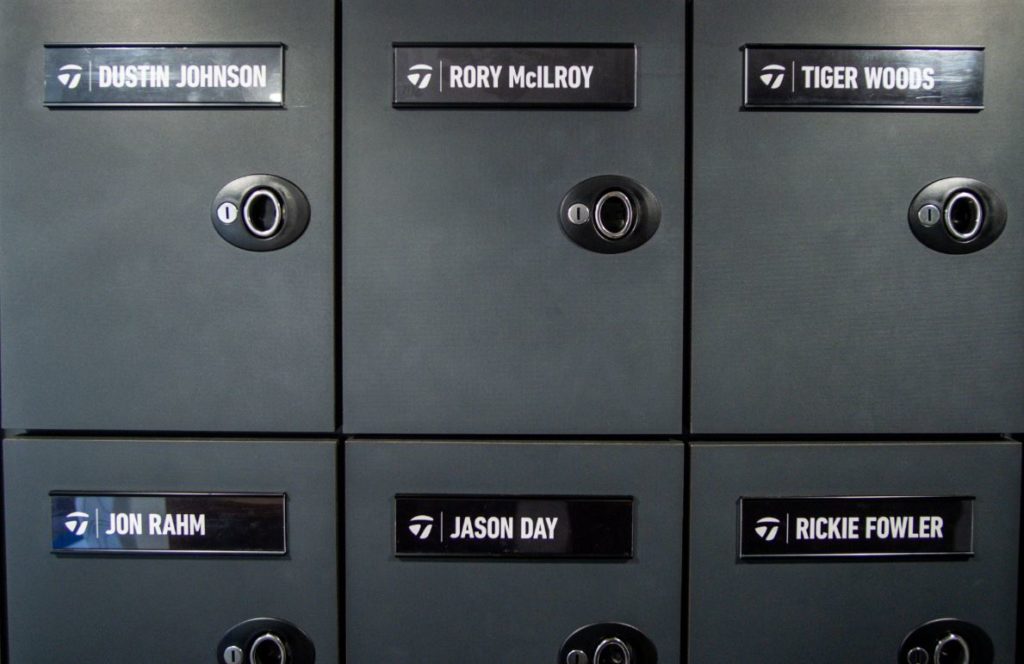 “Whatever the players need, we do it in the truck,” Liles said, referring to the players with whom TaylorMade has endorsement contracts, including top-10 stars Woods, McIlroy, Johnson and Jon Rahm, as well as talented young players such as SCGA products Collin Morikawa, Matthew Wolff and Beau Hossler.

“We do new grips,” he said. “We do lie-loft checks on their irons. And if a player is struggling or wants to try something new, we can bang it out right here, build a club in about five minutes in this trailer.”

Liles, 52, a 1986 graduate of San Clemente High School, joined Carlsbad-based TaylorMade the next year. Initially, he was tasked with putting grips on 800 clubs a day on the company’s production floor. He worked his way up through the ranks and took over tour truck duties in 2000, saying he’s been driving 35,000 to 40,000 miles on the job a year while working an average of 37 tournaments around the country.

Sometimes the job requires coast-to-coast travel from one event to the next, as was the case after Liles steered his truck out of Riviera CC recently and headed directly to Palm Beach Gardens, Fla., for the Honda Classic, the first event on the Florida Swing.

Crashes at un-signalized intersections, the cause of the crash is usually attributed to a driver who are failing to yield the right of way. That’s why it’s so important for drivers to come to a complete stop and be aware of which vehicle at the ALL WAY stop was first to arrive at the intersection.

The TaylorMade truck is only one in a caravan of tour trucks owned by major club manufacturing companies that travel between tournaments, sometimes together in a convoy. Each week, you can see all of the semi-trailers adorned with huge golf logos lined up as close to the driving range as they’re allowed to park, including Callaway, Srixon, Titleist, Cobra and PXG, among others.

Kevin Napier, the senior tour technician for Callaway, is another “double duty” truck driver/clubfitter with 38 tour events on his schedule this year. And he said it’s a friendly fraternity even though they work for rival companies.

“We spend more time with each other than we do with our families,” said Napier, a Nashville resident in his fifth year driving the Callaway tour truck. “Last year, I think it was 215 nights in a motel. A lot of us (drivers) will run together; a lot of times, you’ll see two or three trucks running together (to the next tournament). Sometimes, we’ll stop and play golf if we can. It’s fun. You have to get along with these guys; you don’t have a choice.”

TaylorMade’s Liles concurred. “We all socialize, we all go to dinners, we all play golf together,” he said. “On the rep side, the people who fly in [from each company to attend an event], they don’t comingle. But if I’m broken down on the side of the road, and the Titleist guy drives by me, they’re going to stop and see if I need help, as I would do for them.

“If I’m missing a grip, I’m more than welcome to walk over to the PXG trailer or someone else’s and say, ‘Hey, do you have this grip?’ We all get along that way.”

Typically, all of the golf company trucks pull into a PGA Tour stop on a Sunday, set up their workstations that day, then open their doors to their respective players all day Monday and Tuesday, plus a half-day Wednesday before taking off for the next event in the next city.

TaylorMade has the newest and biggest truck on tour, unveiled earlier this year. Liles says it’s 42 feet long, 15 feet wide, with an inside ceiling height of 18 feet, and weighs about 70,000 pounds. It also has dual slide-out pods on each side with steps leading to a pop-up level where a lounge with a bar, couch and TV monitor provides a space for meetings or for players to get away from the commotion, as Jason Day and his young son Dash did recently to play PlayStation video games.

The huge trucks are patterned after the Formula One and NASCAR auto racing trucks, and Liles says, “We’re like the pit crew for golf.” 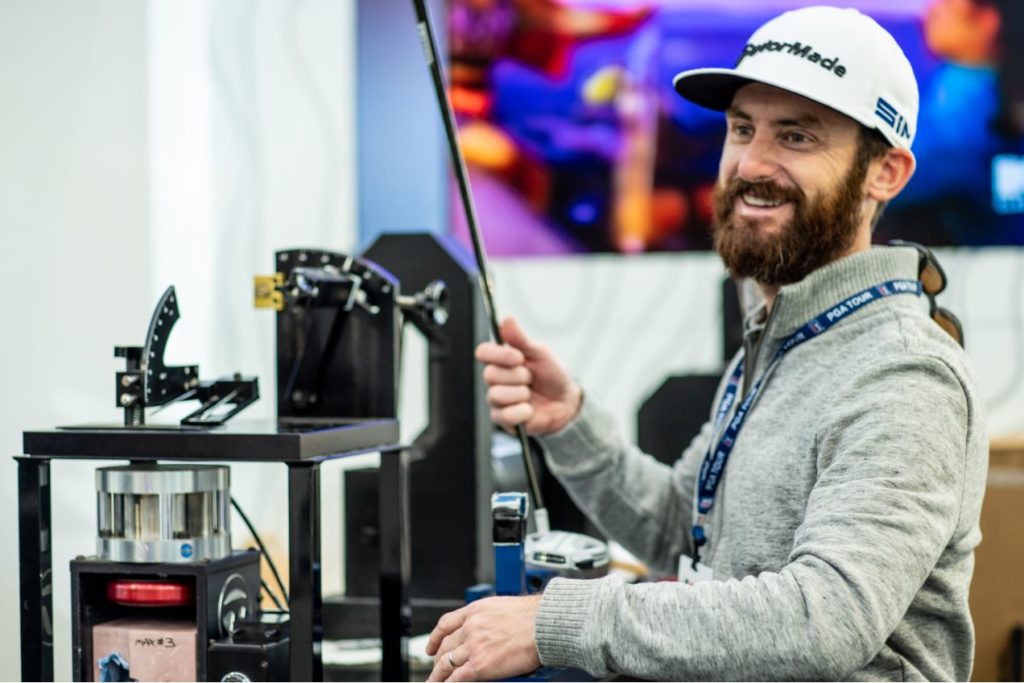 The mobile workshops in the trucks feature multiple lie and loft machines, shaft cutters and gripping stations, as well as polishing and buffing wheels to make the clubs cleaner and shinier. Most trucks have a handful of people working during tournament week, each handling a specialty.

For example, in the Callaway trailer during Riviera week, Napier was taking care of requests related to woods and hybrids; Simon Wood was building wedges and irons; renowned club maker Roger Cleveland was doing custom grinding of wedges; and Joe Toulon was building putters and making backup heads.

“We usually have 20 to 35 of our players at an event,” Napier said, naming top Callaway endorsers such as Phil Mickelson, Xander Schauffele, Marc Leishman, Henrik Stenson and Maverick McNealy. “Once a year, we’ll have to build a new set of irons for a player, or maybe in eight or nine months, depending how much they practice. And every once in a while, when somebody loses a set or has clubs damaged during travel, we’ll have to build a full bag for a player; that’s not a fun day. But we can do it in about two hours.”

During Riviera week, caddies for Schauffele and Matt Every came into the Callaway trailer with requests for minor club adjustments, while Jim Herman wanted a whole new set of irons made in the TaylorMade workshop so he could test them on the range before the tournament.

Liles said that because of technological advances in club-making and clubfitting in the past 10 years — foremost, the advent of adjustable and removable clubheads — there is not as much tinkering with clubs as there used to be before events.

“Back in the day, when we didn’t have products that were so easy to adjust, we had to do a lot of manipulating,” Liles said. “I had to use a blowtorch, and I’d have to take a 10.5 (degree) head and bend it to 8 degrees to give the guy an open look. I broke so many heads of drivers trying to do that. Now it’s just a click of the wrench.

“You can change the loft of a driver so easily and quickly now. And let’s say a guy wanted to change or try different shafts. Back then, I would have had to build him five or six drivers, because you couldn’t take the shafts out. But now I can give you one head, and I could give you 10 shafts to try. So now you’re truly doing a shaft test.” Liles said there are a lot more “low-maintenance guys” on tour now because of the latest technology (especially portable TrackMan devices and movable weights) that enable players to dial in each club.

“Back in the day, when you were watching golf on TV, you’d see the player’s ball hit the fairway and stop,” Liles said. “You don’t see that anymore. Because now we fit for the angle of descent, the way the ball is falling out of the air, and you want it to be at a certain apex, so it hits the ground and runs. Before, a guy had to use a really low-lofted driver and hit it knee-high and let it run. Now you want to hit it as high as you can, and you’re still getting that run. That’s why these young kids are hitting it 300 yards, farther and straighter, because the fitting is so much better.

“It’s amazing. Now we also have guys on these devices for putting to make sure they’re getting the roll and launch and spin that they need from their putter. Technology is really driving the game out here.”

Even so, not everyone is satisfied all of the time.

“There also have been guys we’ve made 25 sets of irons for throughout the year,” Liles said. 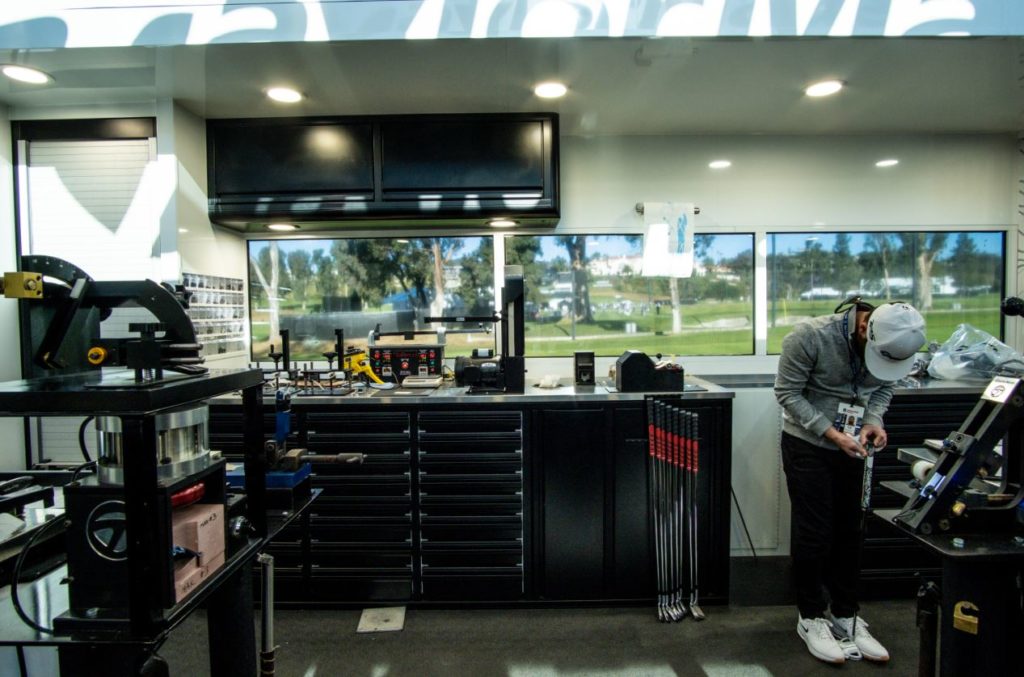 For one guy in one year?

“Yes,” he said. “And for some guys, we’ve made 25 to 50 different drivers. They just like to try things.” Callaway’s Napier said, from his experience, “Typically, the better players and the old-school players [don’t make as many adjustments from week to week or event to event]. The new players, the younger players, they grew up tinkering with fitting, with TrackMan and other tools.”

Napier said Callaway has a database program called “The Playbook,” where all of the specs for each of their tour players — “loft, lie, head weight, swing weight, every single number,” he said — are stored to make it easy to create new clubs at a moment’s notice.

“We have six different [club] heads here in the trailer — retail has three — and this is where I build,” Napier said. “Orders come in here, emailed from the range, I get ’em on my iPad and go to work. This is kind of like a kitchen.”

From every angle and every spec in every new club, the game of golf continues to evolve. But the tour trucks roll on, week after week to every stop on tour.

“It’s my responsibility to get the truck from point A to point B,” TaylorMade’s Liles said. “The other guys I work with in the truck fly in on Sunday and fly home Wednesday. But I enjoy the driving the best, actually.

“I’m always on the company dime, and I don’t sleep in the truck. I know all the hotels around the country that are big enough to park the truck. I love to stay at casinos, because they have big parking lots and tons of restaurants that are always open. And I have a lot of friends at casinos. It’s a great way to make a living.”