From Chaos to Golf Course in Six Hours Flat

IT IS STILL mostly dark as you drive into the parking lot for your round of golf. You’re new to the area, but you love being first off. There’s something special about a 6 a.m. tee time.

Then it dawns on you. The gigantic structure looming maybe 100 yards away is the Rose Bowl. Didn’t they just play a football game there yesterday, a game that drew 90,000 people and ended in darkness? Don’t they park thousands of cars on these Brookside courses, the historic 36 holes that curve around the gigantic stadium and spread off into the distant arroyo?

How can this be? How can thousands of cars, parked in the fairways and rough, not totally destroy a golf course. How can this not take at least a month to get back into playing shape?

Sams has been involved in the Brookside operation for 45 years, and his expertise is essential, as the others become veterans of this chaos. Without them, and this mind-boggling operation they carry out about 15 times a year — UCLA football home games, the Rose Bowl game, plus concerts — Brookside golfers would be playing in a giant junkyard instead of on a playable golf course. 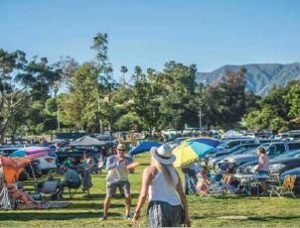 The foursome organize and direct a crew of hundreds — thousands if you include ticket takers and ushers. The cleanup crew will show up around 11 p.m. after a night UCLA game, or the Rose Bowl, or a concert. Often the workers can’t get down into the arroyo until midnight because the police, handling crowd control, focus on getting everybody out first.

Once the Brookside crew gets in, it has about six hours in the cold and dark to collect and truck out as much as 500,000 pounds of trash, rake sand traps, scoop up still-smoldering barbecue coals, smooth out tee boxes, reload 100 huge light towers, and collect the tape used to cordon off areas.

These are often the same workers who, on a day such as Rose Bowl game day, have been there early that morning, setting up those lights, taping off areas and getting lot entrances marked and ready, before heading home around noon, as the crowds pour in.

Every golf course loses a green or two occasionally because of weather or disease. “We’ve never lost one because of parking damage,” Fox says.

But they have certainly had adventures over the years.

One time, a security employee in a rush to get out drove her car into the pond along the No. 9 hole (now No. 18) of the C.W. Koiner Course. They got her out all right, but not the car. They had to hire a guy whose expertise was pulling junk out of swamps.

An 18-wheeler, making a delivery for an event, got misdirected onto the 16th fairway on Koiner, and left giant tread marks along the way. Talk about a bad lie. Another time, on the 18th hole on the E.O. Nay Course, a big-wheeler got misdirected and sank down to its chassis in the middle of the fairway. But they played on at Brookside. “We just told everybody to hit their approach shots over the truck,” Sams shares.

A few years ago, after a UCLA-USC game, somebody’s barbecue set a tree on fire. “The fire department had to cut the tree down to put it out,” Scozzola says.

While the post-game cleanup duty is going on, so is the lost-people patrol. It is late, it is getting cold, and people have forgotten where they parked. “They will tell us things like, ‘I parked on grass near a tree,’” says Sams, chuckling a bit. They’ve never lost a green, or a person.

The Fearsome Foursome of Brookside says that 35,000 golfers a year play at their courses, on a 220-acre footprint. Sams estimates that, since he got involved, in 1974, they have parked more than three million cars on the courses. They said that bad weather has forced them to close down big-event parking just 10 times.

They say their worst days are the USC-UCLA games, because, as Winters says, “SC fans seem to think that UCLA owns the place and so they just bring their trash in and dump it.”

One of the college football playoff semifinals will be at the Rose Bowl in 2021. It will be a huge event, featuring thousands of people — some who will get lost — and tons of trash.

And by 6 a.m. the next day, barring bad rain, players who like to tee off early will be swinging at oh-dark-thirty. It will be, yet again, a Brookside miracle.