Depending on the time of day golfers peel off the 18th green at Big Rock Golf Club at Indian Springs, and on their advance knowledge of what to expect when they get to the bar to settle up and have a pop or two, they might be stunned when they encounter an acoustic music set in the new Beer Garden, or a local band relishing the spotlight on the main stage, or a concert performance from a headlining rock and roll outfit.

The fact that the golf course is named for the pub, rather than the other way around, is the first strong hint that something special might be on tap after a round here. The second is likely the logo, with a prominently-displayed electric guitar eclipsing a golf bag.

Both strongly imply that the Big Rock Pub is far from your average 19th hole. It’s really its own “thing” outside the golf course. From the time golfers pull into the parking lot until the time they drive away, they’ll see nothing to refute those implications.

Depending on which day they play, and what time they finish, a foursome could find themselves relaxing to recorded music on the sun-drenched back porch, or rocking and rolling to live music on the main stage in the pub proper. They’ll also discover that a half-busy night at Big Rock Pub still qualifies it as one of the hottest of Indio’s night-life hotspots.

The entire operation is the vision of Canadian Ken Hanna. A businessman from the Vancouver, B.C., area, Hanna bought the course and pub in 2016 and began transforming the pub space into the rock and roll heaven it is today.

The trip begins at the pub’s exterior entrance, where Elvis greets you outside and Bon Scott greets you inside. Be careful not to mentally fall into the piano hole just outside the front door. If you pass through the golf shop on your way to the pub, prepare your right ear for immediate action, for the main stage will be just to your right. 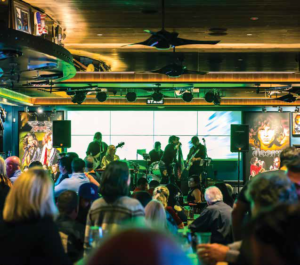 Once inside, guests’ senses are assaulted by sight, sound and fare. The main room, with the main stage and substantial bar serving a slew of beers on tap, is recognizable as a pub. But Hanna’s substantial collection of rock and roll memorabilia is pinned to the walls, highlighted by specialized lighting — neon tubes accent the wall displays, and the men’s room countertops feature glass cases underneath the sinks displaying guitars illuminated by black lights; an entertaining vision while maintaining proper hygiene.

There are massive murals paying tribute to music icons including Stevie Nicks, The Doors, The Eagles and Bob Seger and the Silver Bullet Band. There’s also plenty of dancing room in front of the main stage, where those feeling the music in their souls may physically express themselves.

From the restrooms to the Beer Garden, the front door to the back, the Big Rock Pub stays true to its rock theme. Even the menus go to the rock and roll extreme; when the wait staff appears at your four-top table with what appear to be four record albums, don’t wish you had a turntable with a spindle that allows for stacking platters. Just open the gatefold cover to find the pub’s menu inside. (We got Frampton Comes Alive and Quicksilver Messenger Service covers on our visit.)

“Every piece of memorabilia you see here, (Ken) hung personally,” said Lisa Morgan, chief business development officer. “When he found out this place was for sale, he saw the potential in it and what it could be. The pub is actually designed after his personal man cave back in Canada. What you see here is just a giant version of what he’s got back home.”

An average week at the Big Rock Pub — well, there isn’t really an average week, but there is a schedule. Live music is offered Wednesdays, Fridays, Saturdays and Sundays, ranging from mellow acoustic performances on Sunday afternoons in the Beer Garden (opened in November) to wild, rocking Saturday nights in the main pub, patronized by locals in the know, golfers in the know and those pleasantly surprised golfers still caught up in the fun and excitement some five to seven hours after completing their rounds.

“We have regulars that will plan on playing Wednesday afternoons, because they know the music starts a little earlier (6 pm),” Morgan said.

“(On Wednesdays) it’ll just get packed in here with golfers, happy hour people, and residents who know there’s going to be music,” general manager Stephanie McCormack said. “It’s sort of like a perfect storm of all our demographics. We have everyone at once, and some stay all night.”

Myth Busting: Who You Gonna Call?