L.A. is a here-and-now kind of city. Anything yesteryear is ripe fodder for demolition, no matter its historical or architectural pedigree. Yet the Los Feliz Cafe has been a neighborhood mainstay since 1950, making it equal to Stonehenge in terms of SoCal staying power and enduring appeal. It’s not your standard-issue flapjacks and java joint (though both are prominent on the menu); it’s a redolent whiff of the mid-century past and a sycamore-shaded escape from L.A.’s frenzied freeways.

Two stark monosyllables greet passersby on adjacent Los Feliz Blvd. — a neon-red sign says EAT and the other says GOLF. No argument from me! Anybody with a putter, wedge and five bucks can play the municipal Los Feliz par-three course in under an hour, then repair to the restaurant to settle modest wagers over cold beer and heated conversation. Degree of difficulty: zero. 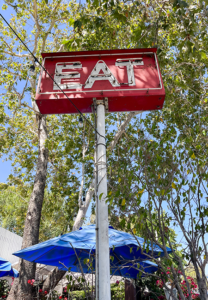 Local OG’s will remember the cafe by its former name, Eatz, which repurposed the last of the residential Quonset huts erected for returning WWII service members in what was once known as Rodger Young Village. And cinephiles might recognize the golf course from the film Swingers, where Jon Favreau grouses to a buddy about his ex-girlfriend while carding a torturous eight. P.S., the actors could have used an on-set golf coach: neither of them possessed anything resembling an actual swing. So much for living up to the title.

But you needn’t sport a Titleist cap and cabretta glove to break bread at the Los Feliz Cafe, which on a given day is home to local hipsters, hikers and bikers — anyone with a yen for reasonably priced diner fare and hot morning coffee.A slow-rolling putting green is but steps away from the capacious outdoor terrace, and the Astroturfed first tee is another 20 yards beyond that. But for the steady background whoosh of passing traffic, you’d think you were in Topanga Canyon — with just as many skittering squirrels and rabbits, if anybody’s counting.

Developer/restaurateur Mike Azarian currently splits time between the Cafe and his latest project: the Griffith Park Clubhouse, which is set to finally open this summer after a comprehensive renovation overseen by his contractor and friend, Art Melkonyan. Both locations maintain their venerable look and feel, but with updated materials and considerable investment. The two men are old-school gents in the best possible sense, both shrewd and soft-spoken.

A recent weekend breakfast at the Cafe was a study in the virtues of homeliness: folks camped out under periwinkle-blue umbrellas with their obedient doggies in tow; a multi-generational party of 12 celebrating a child’s birthday; and a gaggle of goateed Millennials waxing poetic over bitcoins and NFTs. Color me confused, a blockchain blockhead. 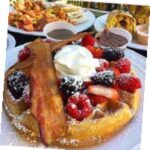 As the unharried and happy-looking staff scurried about with coffeepots and platters of pancakes and eggs, I dispensed with all caution and tucked into a remarkably crispy order of chicken and waffles, Cholula and Tabasco sauce at the ready. Between those accoutrements and bounteous butter and syrup, I was soon destined for a glorious and well-earned afternoon nap. Of course, I had to sample my wife’s huevos rancheros in the name of research and found them equally savory and generously portioned, though — wonder of wonders — moderately priced. What’s wrong with that picture, I ask you?

I must confess to stopping by the very next day to play the golf course, which despite its modest length is a somewhat exacting layout, given the aforementioned mature sycamores and pint-sized greens. A thousand yards later I was rewarded for my Protean efforts with a delicious order of birria-style beef tacos (four to an order!), replete with hot dipping broth and fresh pico de gallo salsa. That and a cold cerveza and I was feeling no pain whatsoever, despite a few bad breaks and bogeys.

Though known primarily for their breakfasts, Los Feliz Cafe is also open for lunch and dinner, offering a copious array of big salads, savory sandwiches — from shawarma to Philly cheesesteaks, along with a vegan burrito and the ubiquitous avocado toast for the faint of heart. Add to that a handful of well-curated craft beers and a legit Arnold Palmer (replete with lime wedge, a nice touch) and you’ve got a recipe for success and longevity in a town long defined by facelifts and facades. Like Governor Terminator once said: I’ll be back.