Carrie Forsyth loves to be in her office again at UCLA, even though the walls are bare except for fresh coats of blue and white paint.

She offers a seat in the form of new, white leather chairs. She’s in the middle of a remodel of her office but still has the school’s three NCAA championship trophies to display, along with other honors. Now that the room is more cheerful, she’s happier when she’s here. Make no mistake, she’s always been thrilled to be coaching at UCLA.

There’s a sliver of a vertical window in which you can see out to the hallway of the J.D. Morgan Center. She didn’t always have an office with a window but one of the longest-tenured coaches on campus has one now.

She’s also spearheaded fundraising efforts for a new locker room for the team. It has new carpet, new lighting and work stations among other things that are more attractive to recruits. Of course, Forsyth and her successful coaching ways are always the main attraction.

Now 46, Forsyth has been UCLA’s head women’s golf coach for 18 years. Her staying power, a rarity in college athletics, is attributed to her work ethic, golf knowledge, experience and pride of being a ULCA Bruin.

She is the epitome of Bruin spirit. She was a walk-on during her college days and by her sophomore season had earned a scholarship. She didn’t play in UCLA’s first NCAA golf title in 1991, but she was on the team. She started her coaching tenure in 1999 and has been in Westwood ever since. She’s led the Bruins to two of their NCAA-leading 113 sports team championships.

“Sometimes, I’m a little in shock,” she says. “I feel I have an obligation. I know the job. I know what to do. I know how I have faith in my abilities to do it well. I believe my administration believes in me and those are all the questions that as a young coach you don’t always have the answers to.” 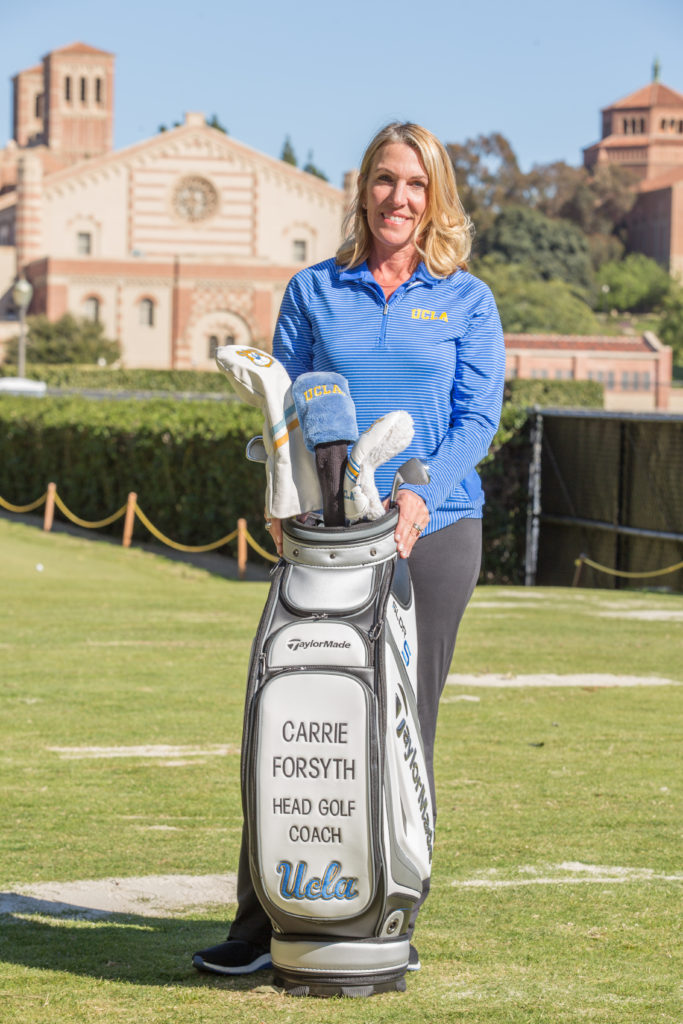 She led UCLA to NCAA Championship victories in 2004 and 2011 with runner-up finishes in 2005, 2008 and 2009. The Bruins have finished in the top 10 in 13 of the last 17 years. Forsyth’s teams have won eight NCAA Regional titles, too. The Bruins are championship contenders every year.

Many star players have come through UCLA in Forsyth’s tenure, including Jane Park, Alison Lee, Mariajo Uribe, Tiffany Joh and more. She appeals to every player, whether they’re there on scholarship or walking on like she did.

“I was proud to walk on,” she says. “My father was disabled, so that opened up the opportunity to receive financial aid and that was a burden off my parents’ backs knowing that I did receive athletic aid and had the opportunity to earn it. When you come in as a walk on, you wonder, ‘Am I up to the same level as these players?’

Chris Carlson, associate athletic director of sports and information at UCLA, is in charge of women’s golf for the third season. He also knew Forsyth from his time as director of basketball operations under former basketball coach Ben Howland. He’s extremely pleased with what Forsyth has accomplished and what she continues to do.

Junior golfer Erin Choi, who played high school golf at West High in Torrance, had always dreamed of playing for UCLA. That Forsyth and associate head coach Alicia Um Holmes were running the show made it even better. Um Holmes is in her 11th season on the coaching staff.

“The reasons I came to UCLA was for Coach (Forsyth),” Choi says. “She’s a very fair coach. She’s flexible with every player. She understands everyone has a different style with their game and does her best to understand and adjust to that. That’s one of the best things for a coach to do. She’s also like our mom on the team. It’s nice to have a friendly environment that’s more than strictly coach-player. We’re close. We all joke around.”

Forsyth played high school golf at Canyon High, so she’s a product of the Southern California golf scene. She played in many local junior tournaments, winning more than 30 titles. She also finished third at the 1983 Junior World Championships at Mission Bay.

“The most vivid memory I have (of junior golf) is getting a hot dog and coke at the turn,” Forsyth says with a laugh. “And most anytime in the summer, there was always a one-day, 18-hole event during the week. One day you’d be at Mountain Meadows, the next day Rancho Park. We would go all over the place. That was normal.”

Forsyth is very competitive, even as a fan. She organizes a team outing to one UCLA football game per season and players love how she cheers. She wears her love for UCLA proudly. It’s evident in the statistics and the atmosphere.

“She’s very loyal to the school and school spirit. I love that,” Choi says. “It’s very rare for someone to play for a team and come back and coach for it. I think it’s awesome she came here and stuck with it. It shows how much she loves UCLA.”

From Magnolia Lane To The Final Four: ...