One Step At A Time: The Steadily Growing Golf Career of Dan Sullivan

There’s a brick towards the bottom with his father’s name on it. One says “SCGA Public Links Championship” somewhere in the middle. There’s a brand new one at the top from the 2016 U.S. Mid-Amateur. But the wall is nowhere near complete. 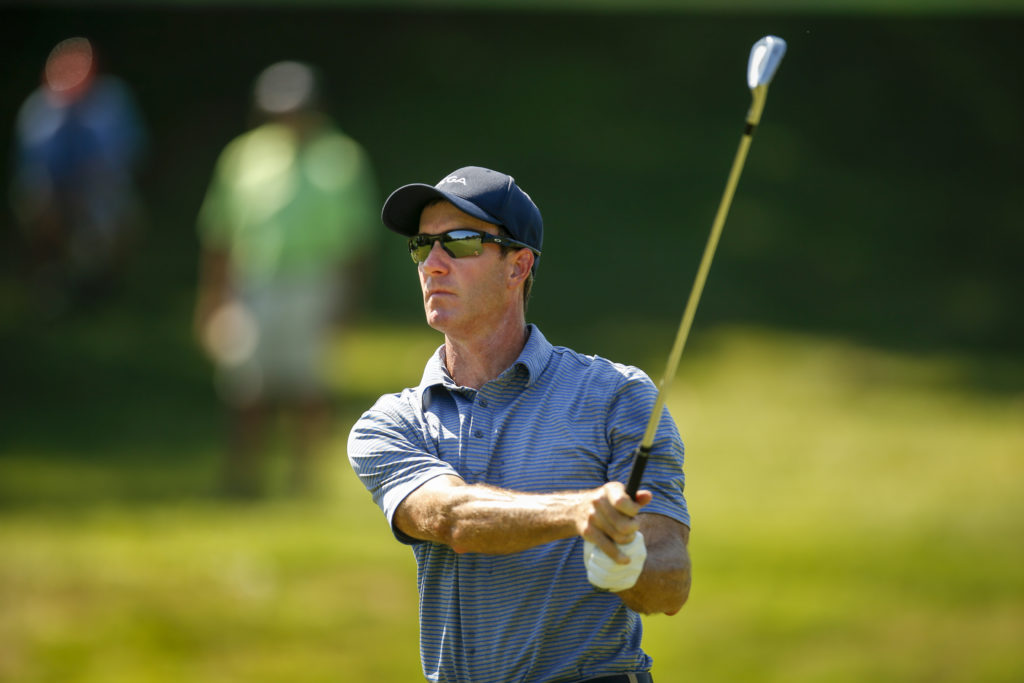 The beginning of Sullivan’s golf story is a typical one. His father played the game, and exposed it to him at an early age.

“I was about 8 years old when I started playing,” remembers Sullivan, who recently turned 50. “When I was growing up he was a member at Annandale GC, and the club was great about letting juniors play. It was something my father and I could do together.”

Annandale became a familiar place for the younger Sullivan. Not only did he play with his father, but he joined the junior team at the Pasadena club, made long-lasting friendships with the other kids and competed in inter-club matches. Pairing the Annandale team events with a sprinkling of local junior tournaments built a competitive foundation for Sullivan’s golf experience that — although it would go dormant for nearly a decade — would come back with vengeance later.

When it was time to go to college, Sullivan relied on his academics to get him into USC. While pursuing a degree in business administration, he did entertain the idea of walking onto the men’s golf team.

“The summer between freshman and sophomore year I decided to really give it a go and see if I could make the team,” Sullivan says. “I wanted to see how good I could get.”

He met with the coach, practiced with the team a bit, but quickly realized he didn’t have the skills to make a team that included 1985 California Amateur champ Sam Randolph and other future PGA TOUR pros.

“It wasn’t about being a good golfer, it was about being great, and in fact, I probably would have had to have been even better than the scholarship guys to earn a spot on that team,” says Sullivan.

Altering course and deciding to forgo competitive collegiate golf turned Sullivan’s attentions away from the sport. Aside from a USC intramural tournament in which he competed annually, Sullivan focused on school and eventually starting a career. But the two ended up coming together after he was hired at Union Bank nearly 22 years ago.

“My first boss at the bank was an avid golfer and had a resident card at Brookside GC,” says Sullivan, who has gone on to win two Pasadena City Championships and six Brookside Men’s Club Championships. “He found out I was a decent player and encouraged me to get a card. We started playing together pretty often.”

With good reason to get back on the course, Sullivan was playing golf again. But what about the competitive side of the game?

“I reconnected with an old friend I had played with growing up at Annandale who was involved with the Brookside Men’s Club as well as SCGA and USGA events,” says Sullivan. “He introduced me to some of the better players at Brookside and it reignited the competitive aspect of my game.”

It was clear the competitive golfer within wasn’t buried too deep. Sullivan started competing in local tournaments and taking lessons with Bobby Laskin, against whom he had competed as a junior golfer. Sullivan hadn’t competed in eight or nine years, so in his own words, his swing was “pretty bad.” Laskin helped get it sorted out, but he did more than improve the technical side of Sullivan’s game.

“He really got me interested in playing tournaments again, because in addition to being really knowledgeable about the golf swing, he was also just so supportive,” Sullivan says. “I remember him saying, ‘You’re as good as any of those guys, just get out and do it.’ It was instrumental in getting me back into competitive golf, and I could see some progress. I realized that if I kept playing, kept practicing, I would get better.”

Credit a brick to Laskin. 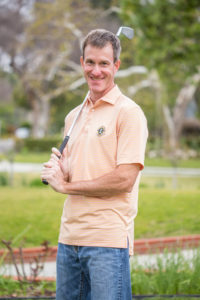 Sullivan’s progress didn’t come without work. As he entered the world of amateur golf tournaments, he also committed himself to getting better, which meant playing and practicing a lot more often.

“I would practice at least a couple times a week, and take a lesson every couple of months,” he says. “I got to see more and more results, and the focus turned to figuring out how good I could really get.”

At the time, he was working his job at the bank and living in Pasadena as a single 30-something. He would hit balls every day after work at Brookside, compete in monthly club tournaments and make a go at qualifying for larger USGA events.

“I remember the first time I tried to qualify for the U.S. Amateur, I thought I was in so far over my head,” he says. “It was 2001 at Tustin Ranch and my goal was to not embarrass myself. I shot two rounds of 76, and while it’s not great for a tournament player, it was good for someone without much competitive golf under their belt. I accomplished my goal and took something positive out of it.”

Sullivan had played in one SCGA Amateur in 1986 as a 19-year-old, but didn’t return until 2002. He made the field as an alternate, and playing on an especially long track at El Caballero CC, shot a solid 74 in the opening round. He would follow it up with an 84 and miss the cut.

Three years later, he would qualify for his first USGA event, the 2005 U.S. Mid-Amateur Championship at the Honors Course in Tennessee.

“It was a shock to me,” he says. “I had participated in several USGA qualifiers at that point, but mostly for the experience. Suddenly I was like, ‘Wow, I’m playing in a USGA event.’ Again, it was another small success, another step.”

The experience at the U.S. Mid-Am helped Sullivan gauge his talent, figure out how it stacked up against some of the best amateur golfers in the world. He missed match play by a stroke, quite the accomplishment for a first-time competitor. Something was working. Progress was being made.

A year later, he’d qualify for the U.S. Amateur. In 2009, he’d make match play at the U.S Public Links Amateur and eventually beat future PGA TOUR pro Luke Guthrie in 19 holes in the Round of 16. His golf game was there, but potentially more importantly, he was learning how to play competitive golf, and all that comes with it.

“In 2008, I shot 7-under-par for two rounds at a qualifier at Los Serranos, ended up in a playoff, and didn’t make the Pub Links field,” remembers Sullivan. “I remember thinking, ‘What else do I have to do? That’s as good as I can play and I still tied for fourth.’ The next year I medaled at 4-under. It taught me that you can play well and not get through, play decently and make it in. Those are the vagaries of tournament golf.”

His first established amateur win would come shortly after at the SCGA Public Links Championship at Brookside in 2012. But it was last summer when Sullivan would take his biggest leap forward yet, advancing to the semifinals of the U.S. Mid-Am, and just two wins shy of a spot in the Masters.

“It just continued to slowly elevate my confidence level,” recalls Sullivan. “I played really well for a whole week, not just for a match or two. I played well under pressure. I won meaningful matches. It built on the confidence I’ve seen grow over the last 15 years or so.”

THE NEXT GENERATION OF SULLIVANS 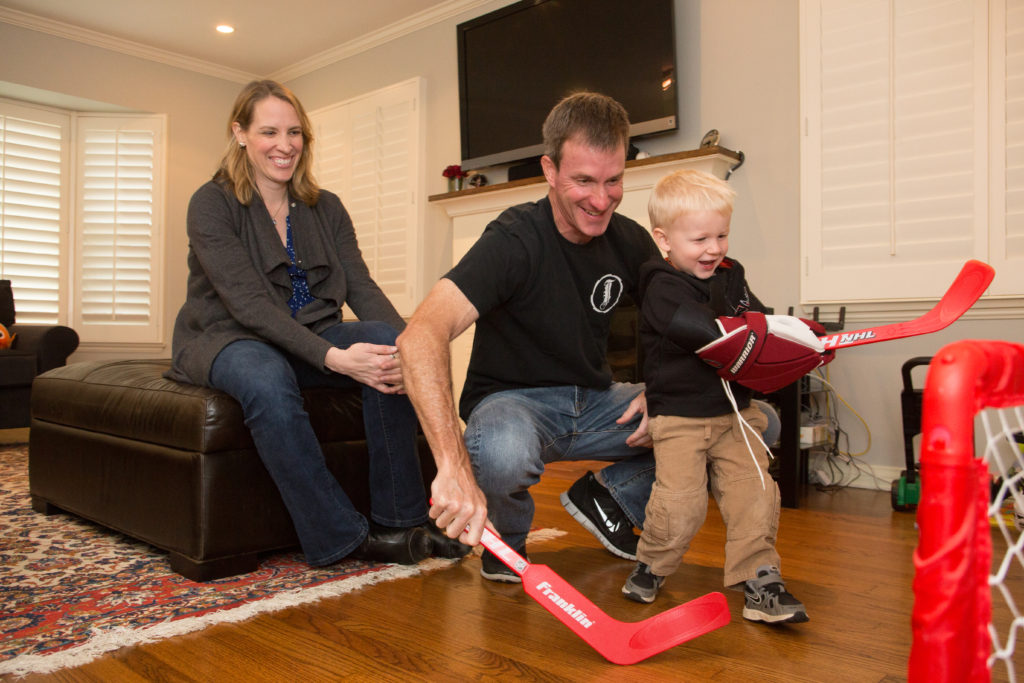 Not only was the Mid-Am run special for Sullivan, but for his family too. After marrying Lindsay Amstutz, a top marketing executive with FOX Sports, in 2012, the couple had their first child in 2014. With FOX Sports taking over the television rights to USGA Championships a few years ago, watching golfer/husband/dad on the national stage turned into a family affair.

“It was close to being the best day of my life,” says Amstutz of her husband’s Mid-Am semifinal match. “It was surreal at first, seeing your husband on television like, ‘Hey wait that’s Dan!’ But to see him do well was great. Working there certainly added to the excitement. To have it be on our channel and have the entire FOX Sports staff tuned into that Mid-Am like it was the Super Bowl, it was incredible.”

Their then-2-year-old son Travis got a kick out of it as well. He’s a passionate golfer himself, as much as you can be at 2.5 years old, and loves playing with his plastic set of clubs as often as he’s allowed. He seems to be following in his dad’s footsteps, as Travis has become a regular at Brookside.

“He’s spent a lot of time there,” says Sullivan. “When he was just a few days old I started taking him to the course. I’d line it up with his nap time so that he’d fall asleep in the car, I’d move him into his stroller, and go hit balls and putt. He’d wake up, I’d feed him, and we’d go home.”

Not exactly like the days of hitting balls as a single 30-something after work, but practice is practice. And the routine has continued as Travis has grown up, but these days you’ll see Sullivan working on his putting with his miniature companion running around the green and chipping and putting himself.

“He seems to like every sport right now, so we’ll see what he gets into the older he gets,” says Sullivan. “If he continues to enjoy golf as he gets older, that would be really cool. I remember how much I enjoyed playing with my dad.”

Recently, Amstutz and Travis were at Brookside watching Sullivan compete in a men’s club event. It became clear there’s a second Sullivan star at the Pasadena facility.

“We were near the putting green and three or four men recognized Travis and came up and were high-fiving and fist bumping him,” says Amstutz. “He’s quite popular there!”

“I’m not going to lie and tell you I haven’t imagined that someday down the road I could be caddying for Travis in a tournament,” says Sullivan. “It would obviously be great if he and my daughter got into the game. If that turns out to be the case, there’s no doubt that would equal or exceed all the enjoyment I get from playing in tournaments.”