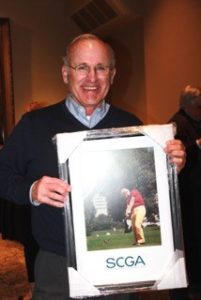 Sometimes, while we watch the gems of the pro golf tours playing lights out, week after week, we forget that the game is nurtured and sustained by other jewels. Jim Porter is one of those. In the world of golf, he and his fellow club pros are the 20-karat gold of the game.

Porter slipped away into retirement quietly on the last day of 2016. He had been the head pro at Red Hill CC in Rancho Cucamonga for the last 26 years.

Nothing radical triggered the move. There was no particular bucket list that, at age 65, he needed to fulfill. No health issues. No anger, nobody pushing him. He answered the question of “why retire” hundreds of times in the last few months the same way: “It was just time.”

They had a nice send-off party for him at Red Hill. The special guest was SCGA Hall of Famer Eddie Merrins, the “Little Pro” from Bel Air CC, who gave Porter his first job out of college and spoke highly of the kind of person and value to the game t
hat Porter was. Having Merrins there meant much to Porter.

“When I got out of college,” he says, “I kept bugging him for a job, any kind of job. He finally called one day and said I could come work for him. He said he could only pay me $500 a month, and that that would not get any bigger. I wasn’t going to be out on the course a lot. I was mostly taking care of equipment in the back. I was living in Santa Monica and, with the $500-a-month salary, my wife had to go to work. Still, I was thrilled.”

Porter was nothing if not realistic. Most in his position, and at his age, would have been drowning in illusions of grandeur. He had, after all, won the 1974 SCGA Amateur title at Brentwood, beating 62-year-old Ted Richards, a former champion, on the fourth playoff hole. That had taken place shortly after his four-year run as a top player at UCLA, mostly as the Bruins’ No. 1. And shortly after his SCGA Amateur title, he took a swing at some pro mini-tour events and even got into the TOUR qualifying school in Florida one year, where he missed the first cut by 1 shot. He even qualified, and played in, one L.A. Open at Rancho Park.

But natural perspective, and a quiet, self-effacing sense of humor, helped him deal with the reality that his career would not involve teeing it up alongside Greg Norman a lot.

“When I won the SCGA Am,” he says, “I was lucky to be so many years younger than the guy I was playing in the playoffs. I won on the fourth playoff hole, No. 4 at Brentwood, which was a 445-yard par 4. I had an 8-iron in and Ted had a 4-wood. His shot buried in the lip of the bunker and it was over. It came down to the age and distance-difference thing.”

If you ask him about UCLA highlights, he talks about life friendships made there and about highlight moments that are good now mostly for a chuckle.

“We played Stanford and everybody was excited about going against Tom Watson,” Porter says. “When it was over, he had shot 74 and I shot 72. We didn’t even play in the same group, but I could tell people I once beat Tom Watson.”

His best memory of playing in the L.A. Open?

“I got to play with Mac O’Grady,” he says. Shooting 72-78 and missing the cut was not the end of the world.

Porter’s family moved to Claremont in 1960. That’s a stone’s throw from Rancho Cucamonga and Red Hill. Porter’s father was a golfer, joined Red Hill, and that meant Jim and his sister, Sue, got to play there a lot.

“Red Hill was like home to me,” Porter says.

But it took him from the bag room at Bel Air to jobs at Ojai Valley Inn in hotel administration, to Valencia Golf Cub as assistant pro, to Vista Valencia as head pro, to stops at Industry Hills and Oakmont, before the call came from Red Hill. And the decision was easy.

“I wasn’t just going to a job,” he says. “I was going home. Red Hill always felt like a big family. It wasn’t Bel Air, or L.A. Country Club, or Lakeside with all the movie stars. But the people loved being there and were proud of the place.”

Porter’s best illustration of the difference between Red Hill and the more famous L.A.-area country clubs is that, back many years, when they were working on a new back nine at Red Hill to go with the classically designed front nine of the same George Thomas Jr., who did Riviera, Bel Air and LACC and so many other great courses, instead of hiring costly construction workers, members went out and carried off the rocks themselves.

For all his 26 years as the Red Hill head pro, it was Jim Porter quietly getting things done, organizing events, making sure that Thomas’ course concepts were not sacrilegiously altered, keeping the members interested and happy. From his eastern corner of the Los Angeles golf landscape, Porter quietly served the game and helped thousands appreciate it more.

If there were a leaderboard somewhere for club pros that measured consistency, longevity and effectiveness, Jim Porter would be at the top, somewhere around 25-under-par.

An Afternoon With World No. 1

Mike Trout: From the Batting Cages to ...