For one of the nicest guys in golf, the nicest time of the season is when the PGA TOUR begins its annual West Coast Swing.

Since trading his clubs for a microphone 20 years ago, CBS golf analyst Ian Baker-Finch calls pro golf’s return to SoCal his favorite time of the year.

“I really do look forward to it,” says Baker-Finch of the TOUR’s January and February schedule.  “It’s the start of a fresh season, and I think everybody in the cold climates is looking to the West Coast Swing to bring golf to them in their living rooms before the fireplace.  The courses project so beautifully, and it’s just an amazing time of year.”

Amid the Swing’s five-tourney journey from SoCal desert and beach, over to Phoenix, up to NorCal and then back down to L.A., Baker-Finch sets up stake at Toscana CC in Indian Wells.  A former homeowner at Toscana (or, “Toscaner,” he pronounces in his Australian accent) and a member at the choice Coachella Valley club since it debuted in 2004-05, the active Aussie plays readily, teeing-up on every off day.

“To me, it’s in the ideal location in the desert,” Baker-Finch says of Toscana’s sister courses, designed by Jack Nicklaus.  “It’s surrounded by mountains, which, of course, are snow-capped during high-season.  And in-season, you’ll get the sun until it sets, whereas if you’re right up by the mountains, you start losing that light and warmth early in the afternoon.”

For the amiable announcer, the tenets of light and warmth have long extended to his analysts’ booth.

IN A MEDIA AGE WHERE criticism oft-usurps complement, the positive lilt of Baker-Finch’s springing voice is more pleasing than ever.

“When people are tuning in to a telecast from their living room – and this is some of the greatest advice I received when I first started this job – I want to be a welcome voice in people’s homes,” he says.

With the tenor of social media snark typically typing faster than the tone of tribute, Baker-Finch is a refreshing antithesis.

“I follow social media to the extent that it helps me stay up-to-date throughout the weekend and the telecast, and to keep up with players, coaches and the science of golf,” he says.  “But there are a lot of faceless, typewriter pirates out there that are just chomping at the bit to point a finger or make nasty comments.”

Recognizing twenty years in the announcing game with work at ABC and ESPN preceding his decade with CBS, the length of Baker-Finch’s broadcast career has now usurped that of his playing career.

“I never thought that would be the case,” he says.  “When you start playing on tour, you think you’re going to be there forever.” 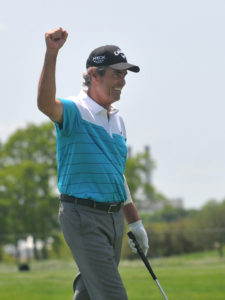 Ian Baker-Finch pumps his fist after sinking a birdie putt on the third playoff hole to win the Liberty Mutual Insurance Legends of Golf Raphael Division in 2013.

Of course, Baker-Finch’s empathic style is born of one of the more curious playing careers in the last 100 years.  A 17-time winner around the world, he’d capture the Claret Jug at Royal Birkdale in 1991 (as a 50-1 longshot) with a sterling 64-66 weekend performance.  And while the major win affirmed his place among the world’s best in the early ’90s, a painful, well-publicized loss of swing would see Baker-Finch’s game devolve amid a prime, mid-30s age where many players find the height of their powers.

Between the 1994-97 seasons, Baker-Finch, mere years removed from being a world top-10, would miss 32 consecutive cuts on tour.

From touching the game’s savory heights to tasting its dour lows, Baker-Finch, 57, brings to the microphone a unique understanding of the game’s peaks and pains.

“I’m not specifically trying to be that way, but I am just naturally that way,” he says of being known as the nice guy announcer, adding with an Aussie chuckle, “a lot of the announcers, the older they get, the better they were.  I never want to be accused of that.”

“I am a player, and I’ll always be a player,” he continues.  “The golf courses today are extremely difficult; the set-ups are extremely difficult.  These are the best players in the world, so when they make a mistake, when something doesn’t go right, there’s a reason for it.  And if it just wasn’t a good shot, I’ll say it wasn’t a good shot.  But I’m not going to bag the player so much as I’m going to try and give viewers a reason why that shot may have been poor.”

“I think I’ve got a really good handle on the highs and the lows,” says Baker-Finch.  “I was a cocky and brash young player that was going to win multiple majors and be one of the best in the world, in my mind and my preparation.  But then, after a while, after winning a major and not being able to face up to the pressures of being a top-class player and major champion, I kinda’ lost my mojo in my mid-30s, stepping away from the game and really being in a place where I just couldn’t quite figure out what I’d lost.  I see it much clearer now as I’ve gotten older.”

APPLYING THE SAME tenacity which saw the former Australian farm born leave home at the age of 15 to become as assistant golf pro and arise as the 54-hole co-leader at the British Open less than a decade later, Baker-Finch is a study in motion.

Swinging with the same work ethic which long found him one of the game’s biggest practitioners of prep, he readies for each tournament as if he were still placing tee to turf.

“I pride myself on my preparation, which I think is key,” he says.  “Just like as a player, you have to be ready to go.  In golf, you don’t have an avenue ‘out.’  There’s nobody to blame but yourself; it’s up to you.  Yes, we’re all part of a team, but you have to be ready when called upon.”

When his mic goes live, he doesn’t shoot from the hip.

“I keep notes on every tournament, which I update each year when we go back,” Baker-Finch details.  “On my iPhone and iPad, I use the ‘Notes’ app, and update it weekly on the 20 or 30 players I keep notes on each week, and add that to the 500 or 600 I have in the database.  It’s everything from their stats, to world golf ranking to FedEx Cup ranking.  So, when I sit there in the tower each week, I have my phone on one player and my iPad on another, along with the scoring and ShotLink, so everything is at my fingertips and ready to go.”

When not announcing, Baker-Finch is never far from the turf.  Along with his work in course design, he’s recently endeavored the golf excursion game with his “Ian Baker-Finch Golf Travel” business.

“I’m trying to encourage more people to come to Australia to play golf,” he says.  “Everybody talks about Scotland and Ireland, which are wonderful locations.  But everyone says, ‘I always wanted to go to Australia, but it’s so far.’  So I’m doing everything I can to get more people to experience playing in Australia and New Zealand.”

Given his unique perspective on the game, the guy known to fellow players as “Finchy” is also wont to share his playing experiences with today’s professionals.

“I think old players like me are an underutilized resource in mentoring and coaching,” he says.

Whether by call, text or the occasional in-person visit, Baker-Finch has taken numerous PGA and LPGA pros under his wing, including world No. 1 So Yeon Ryu.

What does one of golf’s nicest guys charge for his mentoring?  Nothing, of course.  For him, the payoff is seeing potential realized in full.

“It’s a way for me to still be part of the game, in helping people become better at what they do,” Baker-Finch concludes.  “Helping their self-belief and big picture perspective, working with them to be more efficient in how they prepare and making them feel better about their games.”

Power Up Your Golf Swing