News
Home›News›A Look Back: The Colorful History of a Desert Classic

A Look Back: The Colorful History of a Desert Classic

For golfers enduring the cold winter months, watching the PGA TOUR play the game in locales blessed with decidedly better weather than their own is always a pleasure. Indeed, some of the game’s most popular telecasts have long emanated from the TOUR’s famed West Coast Swing, and none have offered audiences a better mix of palm trees, celebrities and birdies than Southern California’s Humana Challenge.

Most of us still associate the event with legendary entertainer Bob Hope, a devout golfer and the face of the tournament from 1965 until his death in 2003; and even after Hope’s passing, the tournament retained his name until 2012.

But the tournament’s history actually goes back to the early 1950s, when the celebrity-laden Thunderbird CC began hosting a pro-am which drew many of the game’s top professionals to play — and party — with the club’s unmatched roster of Hollywood stars. The Thunderbird Invitational became such a hit that in 1960 it debuted as a recognized event on the pre-PGA TOUR winter circuit called the Palm Springs Golf Classic, but from the outset this would be a tournament like no other.

Utilizing a unique format designed by 1959 PGA champion Bob Rosburg, the Palm Springs Golf Classic included a field of 128 professionals and 384 amateurs competing in a pro-am competition played over the course of five days. Naturally, multiple golf courses would be required for such an endeavor, and in keeping with its overall grandeur the event opted to utilize four: Thurnderbird, its near neighbor to the north Tamarisk, and a pair of then-outlying clubs, Bermuda Dunes and Indian Wells CC. Also in keeping with its opulence was the event’s purse, a then eye-popping $100,000.

Rosburg’s formula would prove popular (it remained in use for over 50 years) but also quite effective at identifying great champions — the latter point illustrated by Arnold Palmer winning in both 1960 and ’62, and Jack Nicklaus annexing the title (in an 18-hole playoff with Gary Player) in 1963.

Though a participant in several of the early Thunderbird events, Bob Hope’s involvement became official in 1965, when it was decided that the tournament’s proceeds would go towards the building of a hospital (today’s Eisenhower Medical Center) on land donated by Hope, an SCGA Hall of Famer, and his wife, Dolores. His connection to the event would soon become its defining quality, forging an identity so strong that the Bob Hope Classic retained his name until fully eight years after his 2003 passing. 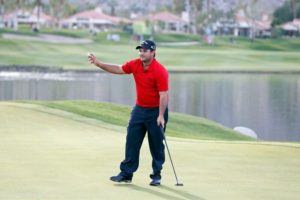 The first decade of the Hope years continued to produce great champions, with Billy Casper winning twice (1965 and ’69) and notable players including Doug Sanders, Hubert Green and Rosburg also raising the trophy. It also produced a genuine oddity in the modern world of professional golf — a club professional beating the touring pros — when Tom Nieporte triumphed in 1967, though Nieporte was not quite a neophyte, having played the TOUR regularly during the 1950s.

A LONG RUN OF CHAMPIONS

And then there was Palmer, a man with seemingly little in his Pennsylvania background to suggest an affinity for desert golf. But having already claimed those two early victories, Palmer soon made winning here a habit, adding subsequent titles in 1968 and ’71, then claiming a fifth and final victory in 1973 when he edged Nicklaus and an up-and-coming Johnny Miller by 2 strokes.

But if Palmer didn’t seem the likeliest candidate to find his golfing nirvana in the desert, far less surprising was the success found by players from the Southwest, particularly from 1975-1984. For during this 10-year stretch, only players from California or Texas claimed the title, a run kicked off by Californian Miller’s back-to-back victories in 1975 and ’76 and concluded by Texan John Mahaffey backing up a 1979 triumph with a playoff win over Jim Simons in 1984. 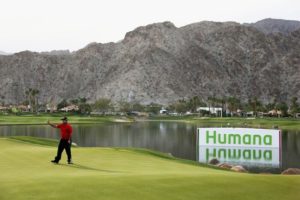 Southeastern products Lanny Wadkins (1985), Jay Haas (1988) and Scott Hoch (1994) were among those to break that streak over the next 10 years, but with Oxnard’s Corey Pavin (1987 and ’91) winning twice and Rancho Palos Verdes product John Cook claiming the first of his two wins in 1992, form still largely held.

The event’s unique nature took center stage when the 1995 edition witnessed perhaps the most unique pro-am team ever assembled: defending champion Hoch paired in the opening round with a trio of United States presidents, Rancho Mirage resident Gerald Ford, George H.W. Bush and Bill Clinton. Predictably large crowds followed the group, stretching Secret Service logistics to their limits. Hoch, for his part, took it all in stride; when asked what the experience had been like, he deadpanned, “Slow.” But no other golf event ever experienced anything like it.

Professional golf’s competitive landscape witnessed significant change during the new millennium, and the Bob Hope would not be exempt. The need for stronger venues to test equipment-enhanced players led to a gradual move towards the town of La Quinta, which had grown significantly over the years, and where the event’s recent sites (La Quinta Country Club and PGA WEST) have been located.

Further, five days of play (particularly in a pro-am format) was not a favorite of modern professionals, a circumstance addressed in 2012 with the tournament’s reduction to 72 holes contested over three courses. But most significant of all was the arrival of tournament sponsor Humana, who came aboard in partnership with President Clinton and his foundation, turning the event into both a first-class golf competition and a seminar on health and well-being.

Though 2015 will be the final year of Humana’s brief sponsorship — and new courses are sure to come into the mix as PGA WEST bows out — the Clinton Foundation and the PGA TOUR are determined to keep one of golf’s legendary winter stops going strong.

“What a small group of community leaders started in 1960 will carry on in all its glory as we find a new partner to continue to build upon the enduring traditions we have enjoyed over so many years,” said Bob Marra, Executive Director and CEO of the Humana Challenge. “Because of the commitment of Humana, the TOUR, the Clinton Foundation and Desert Classic Charities to the tournament’s success over the past four years, we are strongly positioned for the future.”