Should you ever approach the first tee and find Gabriela Ruffels there, don’t hesitate to say hello. There’s a strong chance she’ll be receptive – the social aspect of golf is the primary reason she put down her tennis racket at age 14 and picked up a set of golf clubs.

Now a 20-year-old senior at the University of Southern California, Ruffels won the 2019 U.S. Women’s Amateur Championship, becoming the first Australian to lift the Robert Cox Trophy. She nearly defended her title in 2020, falling to fellow SCGA member Rose Zhang in 38 holes. She won the 2019 North & South Women’s Amateur after reaching the final in 2018, and finished T-15 at the 2020 ANA Inspiration, one shot behind Zhang.
She also bagged individual honors for the Trojans at the 2018 Windy City Collegiate Championship and at the 2020 Rebel Beach Invitational in February, weeks before the COVID-19 pandemic struck. In November, she finished T-13 at the U.S. Women’s Open, posting a final-round 70 to finish two shots behind amateur medalist Kaitlyn Papp from the University of Texas.

All this despite not taking the game seriously until she was nearly 15 years old and worn down by the stressful nature of competitive youth tennis.
“It was such a cool week for me,” Ruffels said of her U.S. Women’s Open experience. “The coolest thing was the pairings. I didn’t play one round without a major champion. I got to compare my game to theirs, see how they move around the course … and it was great to get to know them. I feel like I made new friends.” 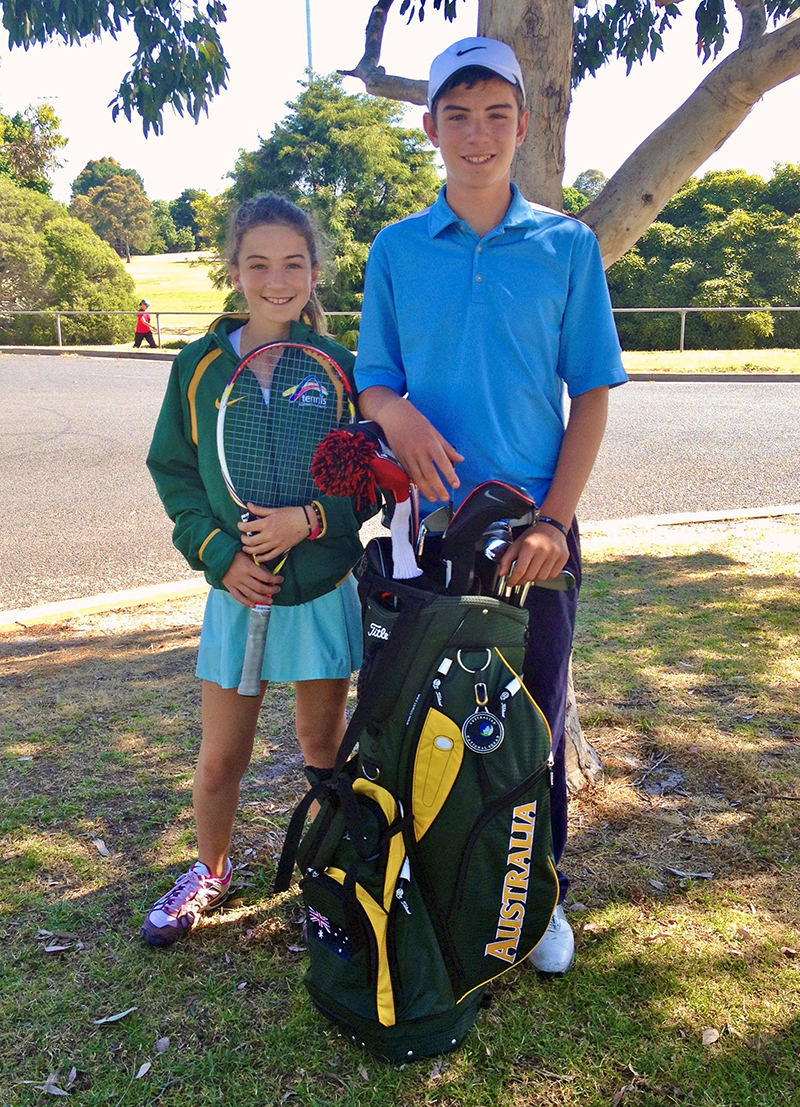 Literally no one, including Ruffels, could have seen this coming six years ago. Ruffels was born in April 2000 to professional tennis players Ray Ruffels and Anna-Maria Fernandez, who brought up both of their children around tennis and golf while raising them in Melbourne, Australia. Ryan, Gabi’s older brother by two years, turned toward golf; Gabi began to focus on tennis at age six.

Both met with success; Ryan quickly became competitive, while Gabi developed a reputation on the tennis court. As she forged deeper into the world of competitive junior tennis, she began to home-school in an effort to continue improving and spend more time with Tennis Australia, the primary organizational driver behind her improvement.

By 2014, Gabi had won three Tennis Australia doubles events, reached the finals in three other tournaments, and the quarterfinals in four others. She represented Australia on the national team at 13 and 14 years old, and was ranked No. 2 in the country in her age group.

The success required commitment. She found herself training, competing, traveling and schooling constantly. It was gnawing at her soul. Ruffels said it was “very cutthroat,” and social interaction with her peers was nonexistent; if she had a relationship with another player, it was an adversarial one. It was a lifestyle she did not enjoy. So in 2014, she decided to take a break from the whole tennis thing.

“It was all getting pretty intense,” she said. “I got to the point where I really didn’t enjoy it anymore. I sort of burned out.”

Always prepared to facilitate her children’s happiness, Anna-Maria backed her daughter. She expected Gabi would return to tennis, but it wasn’t long before she was prodding her mother to hit the driving range. It was the beginning of the end of her tennis life, and the start of a golf career that seems to know no limits.

“I stopped playing tennis because I didn’t enjoy it anymore,” Ruffels said. “But I was so used to being active. My mom took me to a driving range, and I kept wanting to go back after that. I played my first 18 holes in December 2014 with my dad’s clubs. That’s when mom said, maybe we should get you your own clubs. So, ever since I stopped tennis and picked up golf, I’ve loved it.”

When it was time to try tournament golf, an experience during her first competition essentially closed the door on her tennis career and opened another door to the future. As Ruffels approached the first tee, she noticed that her playing partners were chatting with each other. She was amazed by the idea that she could be friendly with her fellow competitors. The players continued to socialize during the round, complimenting one another on good shots and exchanging personal stories. The concept was new, fresh and something she thoroughly enjoyed. The golf bug was biting.

And that’s what they did. Within two years of banging around at the range and first sampling tournament golf, she began compiling an impressive resume. In 2016, she represented Australia in international events in Singapore and Thailand. She played in the Women’s Western Amateur and was named to the Victoria Women’s and Junior State teams. She also qualified for the Junior World Championships, and competed in the Australian Amateur.

U.S. colleges were watching, and many were keenly interested in snatching up the budding talent. 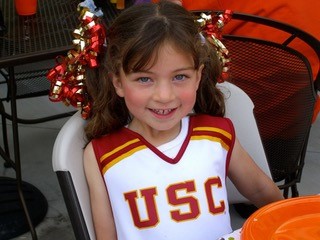 She needed less than a nudge to join the University of Southern California women’s program. Her mom was a star tennis player there, she could play golf year-round, and she could learn from her Trojan teammates, all while majoring in Business Administration at USC’s Marshall School of Business.

“My mom went to USC, and she was actually just named to the hall of fame for tennis, which is super cool,” Ruffels said. “USC has always been in our family. I have a picture of me, I think I’m about six years old, wearing a USC cheerleader outfit for Halloween. It was always kind of my dream school. I love the area, it felt like home. It’s a bonus that the golf program is so good.”
Just after claiming her second collegiate medal, along came the pandemic. While it blew up her school routine, Ruffels said the circumstances have actually been a positive … as long as she doesn’t test positive. With on-line schooling, including virtual classes via Zoom, she has been free to travel and compete anywhere at anytime, and she’s taken advantage. 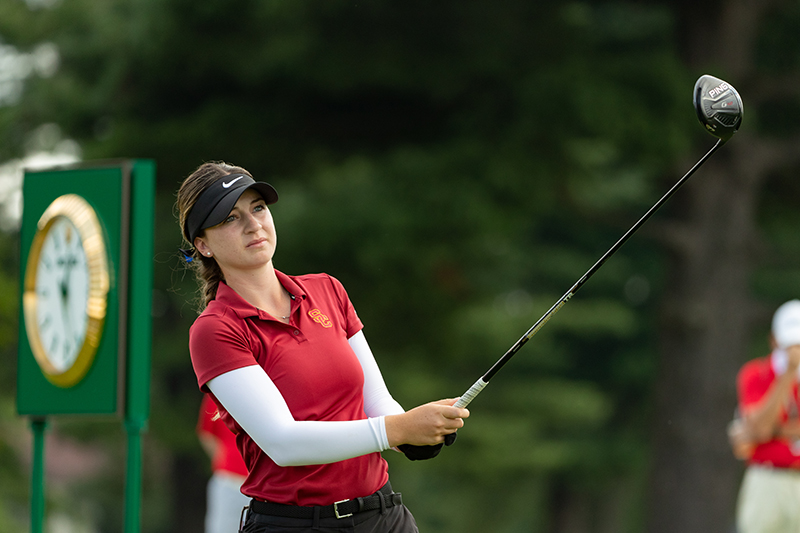 She traveled to Scotland for the AIG Women’s Open (+10, MC), to Maryland for the U.S. Women’s Amateur (runner-up), to the Southern California desert for the ANA Inspiration (T-15), and to northern Florida for the Jacksonville Amateur, where she became the first woman to compete in the men’s event (+14, MC). She played in two LPGA Tour events last fall, the Pelican Women’s Championship (+8, MC) and the Cambia Portland (OR) Classic (+1, MC), and finished T-5 at the Symetra Tour Championship (-1).

She said the experiences are invaluable, as are the friendships she’s making along the way.

“Back in March, when we were all sent home, none of us knew what to expect. We didn’t know if it would be a month, six months, or whatever,” she said. “So for me, it’s been a really good time, because I’ve been able to play in a bunch of professional tournaments, play in things other than college (tournaments), and explore other things.

“I’m learning the ropes of professional golf, because it’s the career path I want to go down eventually. Seeing how the professionals handle themselves, how they practice, how they hit shots week after week, four-round events … it’s so different from college golf. Because I’m so new to golf — and I know it sounds weird to say that — every time I play in a professional tournament, it’s all about learning and adapting to that next level.”