We’ve heard of dad jokes and dad bods, right? But did you know that Dad Golf is also a thing? It is. And it’s glorious. Don’t know what I’m talking about? Let’s see:

▪ Pulls up to bag drop with sticker on minivan claiming, “My Child is an All Star”? Check.
▪ Untucked shirt? Check.
▪ Socks pulled up to “almost” knee high? Check.
▪ Visor instead of golf hat? Check.
▪ Yacht Rock wafting from the portable speaker? Check.
▪ Beer smuggled in his golf bag because “those snack bar prices are outrageous”? Check.
▪ Plays from the blue tees when even the whites are more than he can handle? Double check.

You’ve seen him. You know him. You might even be him. And without him, golf is not the same. I mean, who would we get mad at for giving himself five-foot gimme putts with maximum carry-overs on the line? Who would we yell at for constantly improving their lie or conveniently forgetting to add those penalty strokes? It might sound like dad golf is getting a bad rap. No way. Dad Golf is the best. But I guess it also depends on who your dad is.

Playing golf with your favorite people elevates the experience, and for those of us who have dads that rock, we hit the jackpot.

I’m super lucky. My dad is awesome. He was a fighter pilot and flight instructor for the Navy, so he taught us discipline and perseverance. At the same time, he has the patience of a saint, so he never lost his cool with us even while running a tight (but completely fair) ship. And he can fix anything … like anything. MacGyver could learn something from him. He tried hard to share that one with us, too, but sadly it didn’t take. 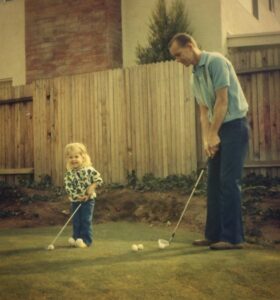 Every year, with both Father’s Day and my father’s birthday celebrated just a couple weeks apart, we play a round of golf as a family and add to the library of memories we have compiled from growing up on the golf course.

I asked the social media universe to share their memories of being with their fathers on the golf course, and they did not disappoint. I think my favorite share was one sweet daughter explaining how her dad didn’t play golf but once asked to tag along. He was wearing shorts with his wing-tips and knee-high socks and was just excited to be there. He was being “helpful” and pulled the pin. Great, right? Except he took the pin to the cart with him instead of putting it back and didn’t realize it for several holes. I laughed until I cried reading that one.

And then there’s the dad who hit an amazing tee shot on a par-three and was so excited that he tore off for the green in his golf cart, not even noticing that his son had tumbled out and was rolling down the fairway. (He was fine.) The man did end up going back for his son, but not before attempting his birdie putt. He missed and learned an instant lesson in karma.

Sure, we poke fun at our fathers, but it should be noted that these same men would do anything for us. Take, for example, a friend of mine whose family could only afford clubs and green fees for one person. Even though his father was an avid golfer, he made sure his son had what he needed to play the game while the father just watched. That melts me. Now that my friend is an adult, he enjoys frequent rounds with his dad, which he appreciates even more because of what his father gave up so he could learn the game.

There are too many special memories with my dad to pick just one, but there is a recurring theme in each of them. He was patient, encouraging, fun and kind. And that is what I remember most, as opposed to any specific incident. So yeah, I’m lucky. And now I want my kids to feel the same way when we are on the golf course together. We still play with my dad as much as we can, and now my kids get to experience that gift as well.

As we think of our fathers, we are thankful for the laughs they provide us, but it’s the love and memories that we hold on to the tightest.

Thank you, dads out there. Thank you for passing down your love for the game. I wish you many more rounds with your children and loved ones.

A Roadmap for the Environment: Whittier Narrows ...