At The TurnSummer 2022
Home›At The Turn›Show Up, Keep Up, Shut Up: The Adventures of an Amateur Looper

Show Up, Keep Up, Shut Up: The Adventures of an Amateur Looper

We ascend toward the elevated green of the par-5 ninth hole on the Champions Course at Tukwet Canyon in Beaumont. The 90-yard, uphill approach shot from my boss for the week, veteran touring pro Louise Ridderström, looked pure, but I’d learned enough over the previous days to just shut my mouth before actually eyeing a result.

The cumulative 52 bones in my woefully flat feet are in full revolt, flanked by unseemly twin blisters on the back of both heels. Reaching the crest and seeing Louise’s Titleist two feet from the hole proved a fulfilling salve to all the aches. My caddie duties soon to conclude, I set her bag on the fringe for the 54th and final time, hand over her putter and think more about Epsom salts than the Epson Tour.

Since covering the Epson’s annual IOA Championship for FORE back in 2019 (then the Symetra Tour), I’ve had my sights on working the week as a caddie on the LPGA’s qualifying tour.

This year offered me my chance.

The event’s Thursday pro-am presented the opportunity for me and Louise to meet in-person. By way of Stockholm, Sweden, Louise segued to a standout career at UCLA from 2012-15, before turning pro in ’17 and making a home in Santa Barbara. Bouncing between the LPGA and Epson Tours, her marks may not be those of a world-beater, but she’s a world-class player, to be sure. Entering her sixth pro season, she’s made a dozen cuts in 36 tournaments on the LPGA, while authoring four top-10s and a 2018 victory in more than 40 events on the Epson.

In short time, Louise echoes the Swedish DNA with which I became familiar a near quarter century ago while a college student abroad in her home country: Smart, fit, polite, sneaky funny and slightly reticent.

Amid her chatter with playing partners, I interject that this track is one with which I’m long familiar, having played and written about Tukwet on several occasions; in addition, earlier in the week, I’d revisited the grounds with a “scouting” round to refamiliarize myself with greens, landing areas and camber, taking fresh notes in a yardage book along the way.

A late opening-round tee time gets Louise’s tournament underway, making the opening salvo of the caddie’s “Show up, Keep up, Shut up” directive easy to achieve.

I watch her tune up, follow her from green to range, clean clubs and keep chatter light. The stand bag is manageable in heft and, per its owner, very Swedish — organized and efficient. Louise checks in with me for the time on a few occasions and then, suddenly, we’re on the 10th tee for her latter nine start; her name is announced, and my looping debut is underway.

Following an opening par, Louise goes birdie-birdie on Nos. 11 and 12 and we head to 18 in very good shape at 1-under. Along the early path, it’s becoming obvious that neither my course knowledge nor course notes will be much of a factor. She’s a pro, a veteran; she knows what she wants. A pattern emerges, for which I’m trying to prove intuitive: Tee shot, walk, talk if she talks, present the range finder, present the yardage book, shot, positive reinforcement, clean club, walk onward.

And it’s all dandy. She’s playing well, my feet are holding up and the mood is light.

Until we reach the green at 18.

Louise hits a measured approach to a funky pin; a sloppy chip ensues before she addresses a 10-foot par putt, clearly miffed. As she lines-up the save, I’m kind of in no-man’s-land between her sightline and the positioning of the bag.

She backs off at the last moment and infers that I’m in her peripheral view. I sheepishly shift, she misses the putt and we quietly lumber to the shuttle taking players and caddies from 18 green to the first tee.

We’re sitting beside one another in silence and Louise looks at the bag, looks to me, then looks back to the bag.

“Where’s my head cover?” she asks, peering at her uncloaked hybrid.

For this, I have no distinct response. I have no idea in hell where that head cover went. Louise has a habit of setting her head covers atop the clubs on the bag, so I start sticking my sweaty arm in the bag’s depths with a silent prayer that my fingers find something down there, but to no avail.

But with my interruption of her putt and the bogey and head cover folly, the entire mood of our pleasant rapport has suddenly gone murky. Her eyes went cold Swede blue as she noticed the missing cover and put me in a fearful sweat on this 87-degree day.

And now I’m totally paranoid as we round up the front side. The fun has been replaced with instant fear that I’m going to lose something — heck, anything, everything in my charge — because there’s a lot of crap to keep track of; in the caddie bib pouch alone is her yardage book and pencils and a pair of official scorecards.

Our banter has gone barren, and I don’t see her smile again until she drains a 40-foot birdie on the final hole of the day, finishing her round at a respectable 1-under.

Post-round, she wants to knock a handful of drives on the range. Within minutes (sweet mercy), Louise’s fellow countrywoman, Linnea Ström, who’d played in the group behind us, arrives at the practice area with a smile in tow… and her friend’s head cover in hand. 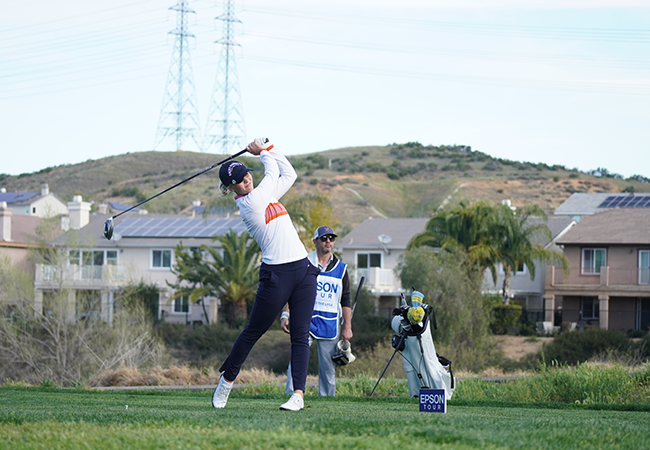 LESSONS OF A PATTERN

Moving day arrives early on Saturday. She’s got the first tee time for Round 2, and we arrive at Tukwet around 6:15 a.m.

Neither of us are in tip-top shape. She had signs of a sore back over the last couple of days, and as for her dutiful pack mule, I didn’t let her know it, but I’d spent the previous evening tending to my quarter-sized foot blisters.

The round takes shape as such, and her game is steady, but not stellar; she plays the first eight holes in 1-over and, along the way, I’ve made another caddie blunder, this time in the form of losing her bag towel.

Though the rag (sweet mercy) was soon returned by a rules official, further silence has ensued, which made our sophomore round a day of speechless lessons.

In the quietude, an organic rhythm took hold of our dynamic: Present range finder; present yardage book; present putter; clean ball; repeat. There developed a silent meter, and even though she asked me for nary a yardage nor a putt read, I began to feel some sliver of knowing my place.

“I like to walk quickly, and I like to have everything ready to go. You did a good job keeping up and getting the routine down,” Louise tells me after shooting even par for the day. “And I appreciate that you became more proactive with that pattern.”

Along with the handling of necessities, a lesson in caddie cues took further hold.

“What people don’t always appreciate is that caddies need to be very socially aware,” she adds. “It takes some time for a good caddie to learn whether the player likes to be talkative or just wants the straight numbers.”

And while I didn’t mention it to Louise on the course, she used the pronoun “we” for the first time on her 16th hole of the day, remarking after a decent pitch that, “Well, at least we have a birdie putt.”

I note the word use in our post-round lunch.

BRINGING IT ALL BACK HOME

A  cumulative 1-under has Louise well inside the cut line and at T-34 heading into the final round. “We” have an 8:11 a.m. tee time, and while I’m hopeful she can make a Sunday run, I awake at 4:30 a.m. with a sincere fear that my feet may not help get her there.

Blisters aside, my barking dogs are tight and wonky; it takes an hour of shuffling around the hotel room and a fistful of Tylenol and the shower wand trained directly on my feet and multiple Band-Aids and two pairs of socks to not feel totally gimpy.

Upon arriving at Tukwet, the final day’s onset presents little promise. Starting on the back, Louise goes bogey-bogey, and even though I’ve yet to lose anything more from her bag, I am starting to wonder if the day will be a wash.

It’s not. After a trio of consecutive pars, something clicks in Louise, something I was truly hoping to be even a small part of in this experience. She finds a zone. Her pace changes; she’s suddenly walking with serious purpose. Strutting even. And while I’m partly terrified of mucking it up for her in some way, I’m also mindful that I’m trying to help her do something special.

She birdies 15, then 16 and 18; making the turn she birdies Nos. 1, 2 and 4. She’s in a total groove. She’s made six birdies in an eight-hole stretch and is 5-under on the round, in an event where the Tukwet cumulative tournament record is 12-under. We’re fist-bumping; I’m literally jogging after her on fairways, just trying to keep up.

Rounding to the par-4 sixth, it seemed the only thing that could slow her down was an act of nature.

As Louise readied her approach, a commotion arose from a home lining the fairway, with a couple shouting “Rattlesnake! Rattlesnake!” Louise, her concentration clearly snakebit, went on to make bogey, and then another on the following hole.

She manages to hang on for a par on the eighth before we reach our final hole in tandem, my feet numb to the point of retirement. Her seventh birdie of the day concludes the stellar Sunday and an eventual T-19 finish; she gives me a hug and tells me in earnest that I did a fine job. I was ready to reply that she spared a test of my raking skills by not finding a bunker the entire tournament, but figured it best to let that comment rest with the Golf Gods.

And as a point of further Golf Karma, Louise’s fellow Swede, Linnea Ström who’d spared me the dishonor of the lost head cover two days earlier — went on to win the event by three shots.

Giving Back to the Game: Lizette Salas ...