The San Diego Hookers and Slicers Golf Club is celebrating its 50th anniversary this year, a milestone that fills George Sperla — one of the club’s founders — with gratitude.

“It is probably one of the best clubs in all of San Diego County,” he said. “I think we’ve gained a lot of respect over the years.”

Hookers and Slicers was founded on the pillars of integrity and friendship, a philosophy that immediately resulted in success, with membership quickly climbing from a core group of eight to more than 100 currently. The club hit triple digits for the first time just before 2000, towards the end of Sperla’s time as president. When he established a shotgun start to his club’s outings to ensure that everyone would have time to connect afterwards, he saw membership soar.

Allan Wicks joined in 1999 through his uncle and has stayed because of the culture of fellowship the club exudes. The 19th hole is just as important as the other 18.

“It’s the relaxed atmosphere where you’re not under pressure to play every week,” Wicks said. “You don’t have
to be the best golfer … we’re more about the camaraderie and keeping players out on the course and active.”

That doesn’t mean they play for nothing, however. Around 40-50 players sign up on a given week and are then divided into flights that play for prizes during the club’s weekly Wednesday outings, in addition to side games such as closest to the pin and a Canadian skins game. 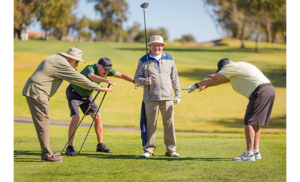 That’s a key aspect that Wicks believes has kept the club together for so long. Especially now that most members have watched each other transition into retirement and are still able to connect through golf.

There are members as young as 55, and then there’s Kenny Bonatus, a dual-sport All-American quarterback at San Diego State in the mid-1950s who still stripes drives at 94.

“They do really push the camaraderie part as far as sticking around, having a drink with the guys, sharing some lunch, whatever,” Wicks said. “(My uncle) described the club as a great bunch of guys, highly organized, highly ethical — nobody you can’t put up with for at least 18 holes. That really stuck with me.”

The club is always looking to add new members, and hopefully build toward a group that will last another 50 years.

“It’s surprising how many guys say, ‘Oh, I’ve heard of (the club),’” Wicks said. “We have three or four guys who are just adamant about trying to expand the membership to whomever they see… once they give it a try, they’ll see that it’s a great group of guys to spend a Wednesday morning with.”