As the 2021 U.S. Open fast approaches, so does the attention surrounding (my brother) Phil’s thousands of (OK, six) second-place finishes in the only major championship he has not won.

But here’s the thing: In each second-place finish, there was always more to the story. It doesn’t mean that the “other” things were more important, and they certainly did not trivialize the disappointment of not getting that U.S. Open victory. But the lack of a victory was just one component of what was important at the time.

Even though we become the person we are through our victories and defeats, they do not define us. There is more to our story than that. So when things fell short of a victory for Phil, it helped to look at the other things going on in that moment to put it all in perspective.

Yes, life throws all of us the equivalent of disheartening second-place finishes. When that happens, take the focus off the outcome and pay attention to what else is going on around you. There is always more.

Phil’s wife, Amy, was pregnant with their first child. While she was at home on bed rest, Phil was in contention, trailing by one stroke going into the final round. But Amy was due to give birth at any moment. Phil had a pager and if that sucker went off, HE was off … as in, off the golf course and off to Phoenix to be there for the birth. Only, it didn’t go off. And on the 72nd hole, Payne Stewart made his iconic 20-foot putt to win the U.S. Open, making the baby drama surrounding a Monday playoff a non-issue.

Rarely do we fully understand the significance of a moment until it becomes a memory. We humans are funny like that. And the memory of Payne Stewart holding Phil’s face in his hands, gushing about how absolutely fulfilling being a father is … well, let’s just say none of us could have known how poignant that memory would become.

The coolest thing? Payne didn’t try to cajole Phil with the promise of future opportunities for U.S. Open victories. Nothing mattered more to Payne in that moment than the thought of fatherhood. And 24 hours later, Amy and Phil found out exactly what he was referring to when they welcomed their daughter into the world. 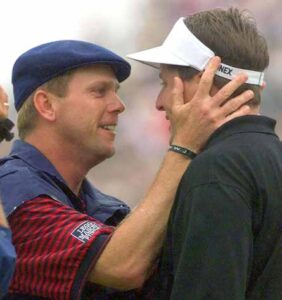 Sure, there was still disappointment surrounding the loss. But Phil and Amy weren’t dwelling on it, because their focus had quickly changed to other things. Life is beautiful that way.

A victory would have been incredible, and for a minute, it looked like it might be attainable. But he was never really in serious contention with this one, so he didn’t walk away feeling like he lost the event … he simply came up short. Tiger earned his second U.S. Open title while Phil earned his second runner-up finish.

There wasn’t much time to contemplate the defeat, because shortly after, he and Amy made the move from Scottsdale to San Diego so their kids could grow up near family. The relationship between grandparents and grandchildren is irreplaceable, something that my brothers and I experienced firsthand through our relationship with our own grandparents. So this move was not a random one. And it was one of the most precious gifts Amy and Phil could have given their kids, as well as both sets of grandparents.

There was a lot of emotion in the air this year. Phil had just won the Masters — his first major championship — in April, and it felt like a “major” weight had just been lifted off his back.

But there was still this inexplicable heaviness in the air. We were about to celebrate our first Father’s Day without our maternal grandfather. He was the patriarch of the family, and we were all still trying to find our balance as we adjusted to life without him. Following the final putt on the 18th hole, Phil promptly came home, and we all helped each other through a difficult time.

Yes, a victory would have been fabulous, but our family’s healing wasn’t dependent on a trophy on the mantel. What got us through instead were numerous family BBQs, laughing at each other’s bizarre “humor,” lots of See’s Candies, grandchildren attending church with our grandmother, crying without the need for explanation … the list is endless.

This was a doozy. And man did it hurt. Phil double-bogeyed the last hole after refusing to play it safe off the tee, and we all proceeded to watch the nightmare unfold. This was more than a loss, it was a throw-away victory. Sometimes you need a minute to allow yourself to feel the pain so you can move through it. You know … succumb to a mini-pity party, regroup as best you can and move on. Learn your lesson but don’t dwell on it. Sounds good, right? Actually doing it is another story. But he did. It was awful and it was hard, but he did. And Winged Foot is not a topic of conversation at the dinner table. Ever.

But if something like this had to happen, being in New York softened the blow more than anywhere else. He has always loved the energy of New York. And the fans? They are clearly his people: passionate, loyal and unambiguous. What you see is what you get, and Phil isn’t known for dancing around a topic or opinion, so yeah, he feels right at home here. Unfortunately, so did that second-place finish.

Phil played in this event, but he wasn’t really “there.” At least his heart wasn’t. Amy had just been diagnosed with breast cancer, which had rocked their world. They didn’t even know exactly what they were up against, but they knew it was big. So big that it didn’t even fully make sense yet.

In the meantime, they needed to remain strong for their three children, all under the age of 10, because this is not something they would know how to effectively process. It wasn’t kept a secret, but children are intuitive, and if they sensed any disruption in the family vibe they could become unsettled. So Amy and Phil gathered all the strength they had and kept things as “normal” for the kids as possible. Phil would have to save his tears for car rides by himself.

Someone along the way told them that keeping everything as normal as possible would be helpful, so he stayed committed to his playing schedule. But being at the U.S. Open without Amy wasn’t normal, nor was it helpful. And just between you and me, once he got there, he realized the only place he wanted to be was at home.

So when the wheels came off in the final round right after an eagle on the 13th hole had tied him with Lucas Glover, the focus quickly became getting back to Amy as soon as possible. Two weeks later, our mother would also be diagnosed with breast cancer. That summer was spent in a medical whirlwind of tests, recoveries, questions, fear and the full gamut of emotions. The blow of not winning that year was overshadowed by gratitude that both Amy and our mother had won their battles and had been blessed with a successful recovery. Talk about perspective.

Three years earlier, in 2010, Phil was diagnosed with psoriatic arthritis. Its onset is commonly caused by stress, and it doesn’t take a rocket scientist to figure out that recent events in his life more than qualified. The fear of wondering whether or not this would put an end to his golf career was profound. To think the illness could ultimately dictate his career path made him feel defenseless. But now, three years later, he was healthy and just grateful to be playing in this U.S. Open, let alone be in contention.

Finishing runner-up still hurt. But what Phil didn’t realize was that simultaneously, at home, a light was going off in his young son’s head. He was actually starting to grasp the significance of his father’s place in the golf world.

We all watched the final round together, and while the rest of us were somber at the outcome, Evan looked around the room with a confused look on his little face. He slowly raised his hand. Someone asked Evan what was on his mind, and this came out of his tiny mouth: “So wait. Daddy just got second place out of ALL those people? And it would have been first place if it wasn’t for that one guy?”

A spark lit in his eyes, and he reverently whispered, “Whoa.”

He raised his juice box like he was giving a wedding toast, looked around the room, nodded respectfully and then slurped that apple juice like nobody’s business. Phil may have been disappointed, but his son was beginning to comprehend who his father was. And he was dazzled.