WHILE THE GAME’S national and regional governing bodies — from the USGA to the PGA of America to the SCGA — have made collective strides in working to diversify the game across the New Millennium, many of the marketing and outreach efforts have focused on the youth and minority markets, respectively.

Yet, the game’s decision-makers would be wise to come out of the tee-sheet closet and recognize a generally ignored demographic of the game: LGBTQ golfers.

Though golf participation across the LGBTQ community may not represent a leading market, the potential for impact may be found with the Stonewall Golfers.

Founded in 2000, the Palm Springs-based SCGA member club (StonewallGolfers.org) has steadily grown to become one of the most prominent LGBTQ golf groups in the world. Stonewall these days claims 160 male and female members (with a 60/40 split) and is pacing toward 180 members by the end of 2021.

Such LGBTQ growth isn’t limited to the golf course. A national Gallup poll released in late February of this year revealed that a record number of U.S. adults — nearly six percent — identify as gay, while a further delve into the numbers shows that almost 16 percent of Generation Z (18-23-yearolds) identify as LGBTQ.

Buoyed by an impressive organizational structure, Stonewall’s penchant for play should grab the collar of any course operator. Annually, the group plays about 1,200 cumulative rounds at more than 30 venues across SoCal. The group holds more than 60 events a year, including a trio of major tournaments: The 3-Day Rainbow Rumble (which debuted in January at Marriott’s Shadow Ridge GC in Palm Desert); a tourney held during Palm Springs Pride (which has drawn full 140-player fields); and the annual Rainbow Challenge in April, which is the group’s biggest event of the year, drawing LGBTQ golfers from around the world.

“Since a lot of people are out here two weeks for the Challenge, we’ve found that many of our golfers coming to the desert have been cooped-up in the winter and are eager for 18 or 36 holes a day,” says Charlie Griffin, acting president of the Stonewall Golfers.

Just how much golf does the Challenge offer?

“Credit goes to Charlie for making the Rainbow Challenge more of a festival than a tournament,” says John Buie, Stonewall’s immediate past president. “For the past several years, we’ve been offering 11 days of golf associated with the event.”

Though the pandemic timeline forced 2020 cancellations of both the Challenge and the Pride events, Stonewall still spent nearly $60,000 at SoCal golf courses last year. Reaching back to normal times, a more equitable figure can be found in the more than $82,000 that Stonewall spent at golf courses in 2019, an amount that includes greens fees and coordinated F&B.

Joining Stonewall as his workload allows, Kyle Winn, PGA, is a gay golf professional and the golf and events sales coordinator at Shadow Ridge, as well as a life skills coach at The First Tee of the Coachella Valley. Having coordinated the inaugural Rainbow Rumble, Winn sees his Stonewall connections not merely as spreadsheet virtue, but also as an immense demonstration of course loyalty.

“I think people will find that once the LGBTQ golf community feels welcome, they’ll continue to support that property,” says Winn. “Any golf resort that isn’t doing something to include the LGBTQ dollar is losing out.” 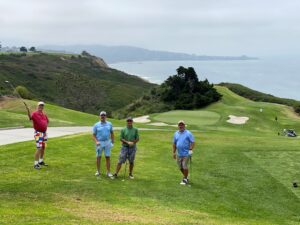 “There actually used to be a bar in Palm Springs named Dink’s, which is an old joke in the gay community. It’s actually an acronym that stands for ‘Double Income No Kids,’ which is still representative of many gay couples. There are a lot of gay couples with money to spend on hobbies that cost a little bit more, such as golf.”

The dollars, the rounds and the Gallup poll notwithstanding, being gay in America still represents taboo for much of the culture, on or off the turf.

“It wasn’t okay to be an openly gay golfer anyplace in the country in 1990, or even 2000,” Buie says. “People would not play with you. So to be able to take that burden of cultural opprobrium off your shoulders is a wonderfully liberating experience. And Stonewall creates a safe place to do that; that’s the value proposition of the organization.”

A hundred miles toward the coast, another of the nation’s largest gay golf groups tees up with equal ardor, albeit with a different approach to its messaging.

ANY GOLF RESORT THAT ISN’T DOING SOMETHING TO CAMPAIGN TO INCLUDE THE LGBTQ DOLLAR IS LOSING OUT.”

Founded in 1996 with a modest four members, the San Diego Lady Links Golf Club (SanDiegoLadyLinks.com) doesn’t advertise itself as an LGBTQ group, although about 85 percent of its 150 members are lesbian. The group’s retired Marine founder doesn’t see a need to openly promote the group’s gay membership.

“Why do I have to? It’s open to everybody, and that’s just understood,” says founder Vicky Minneti. “I spent 20 years in the Marine Corps, and I had to live a double life; maybe it has something to do with that. I’ve just never cared for labels.”

From Minetti’s vantage point, a dearth of gay golf groups serves as a signifier that an overt LGBTQ presence in the game may be far from reaching the latter nine.

“If you can’t find many on the Internet, well, that’s kinda’ telling you something,” adds Minneti. “In our club, I’d say there are some old-school gals who don’t want the publicity, don’t want the label; some are teachers, some are educators, and they’re still not out of the closet. So I want to respect that.”

Progress in LGBTQ golf may find its most stated advance in a swing of unity.

“I think that most of us avid gay golfers still feel left out in some respects,” Winn concludes. “I’ve personally tried to do crosspromotions with other diversity or inclusion groups, and I haven’t felt the support back. I think that whether you’re an LGBTQ group, a women’s group, an African-American golfer group, a Latinx group — we may be separate, but we’re all in this diversity effort and should be doing everything possible to work together to create a more inclusive component to the game.”