Spring 2020
Home›Issues›Spring 2020›A Place for Everyone: Mission Bay GC

AT MISSION BAY GC, “THE VIBE IS REALLY GOOD”

Jeff Friesen looks like he just walked off the boardwalk at San Diego’s Mission Beach.

The 20-year-old University of San Diego student is wearing a gray T-shirt, light blue boardshorts and flip-flops. Even in laid-back Southern California, at most golf courses Friesen would either be told at the pro shop to find a collared shirt, or maybe get some disapproving looks on the driving range.

Not at the Mission Bay GC. Here, Friesen could be the course’s poster boy.

“I’m always stoked to be out here,” Friesen said. “People are nice, very friendly. Everybody gets along. The vibe is really good.”

A few years ago, the managers of the San Diego city-operated facility that includes a lighted par-58 golf course and large practice area, came up with an unofficial slogan:

“One course for all.” They meant it. Go to Mission Bay on any afternoon of the week and you’ll witness the widest cross-section of golfers possible. Tiny kids with their parents, surfers, tourists, businessmen just off work, retirees. All ages and races. Absolute beginners and talented sticks.

And some of them aren’t even there to play traditional golf. Several years ago, Mission Bay embraced the out-of-the-box pastimes of footgolf and disc golf, and now everyone intermingles fairly seamlessly.

“The people I see down there … there are 22-year-olds in flip-flops having a date with their girlfriend,” said John Howard, one of San Diego’s city golf managers. “There are folks who are seasonal, and players who are 85 years old who are hitting their daily bucket of balls. It’s a neat place to be. There’s a lot of action.”

On one bright, warm afternoon in the spring, Bruce Ingles stood on the first tee with two buddies about to hit their opening shots. Beside them were Ingles’ daughter, Saman-tha, and her friend, Josh. They held not clubs, but soccer balls. Neither of the teens play golf — yet — but they were going to get out to experience the course on their own terms. 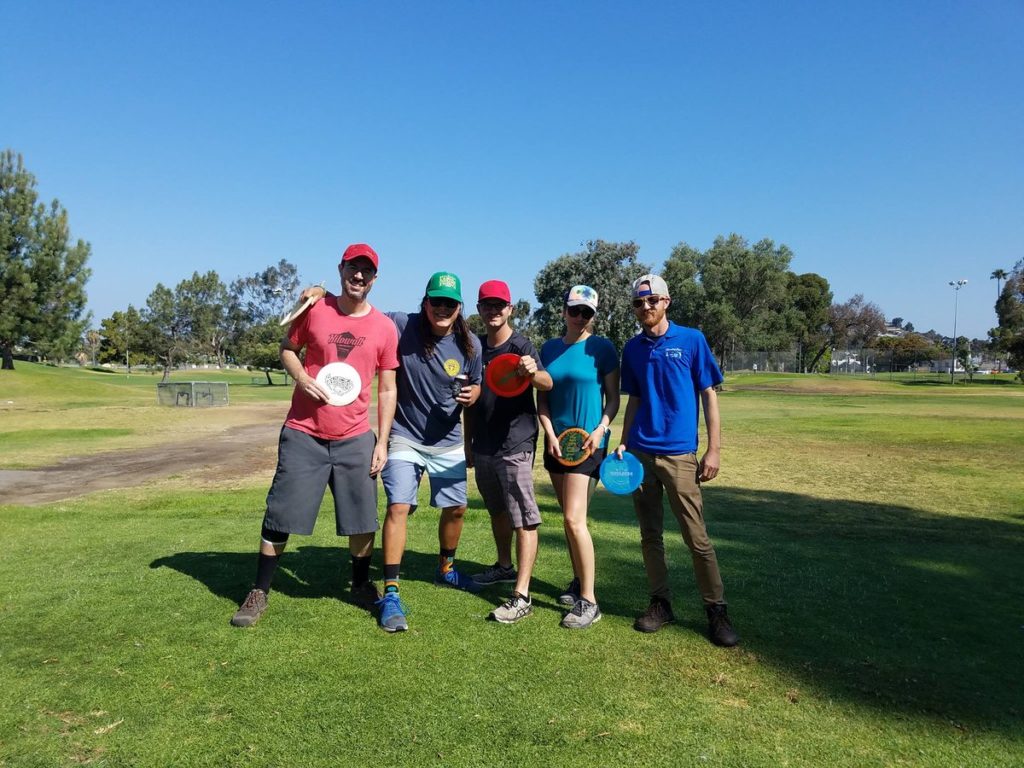 “This is a really a cool way for us to all be together. I’ve been wanting to do this for a while,” Samantha said before blasting a right-footed shot at least 40 yards down the fairway toward the footgolf holes and flagsticks that are set well to the side of the regular golf greens.

“I think that’s the great thing about Mission Bay. You can bring anyone and everyone there, and it’s promoting golf as a family sport,” Howard said. “There aren’t a lot of things that people from five to 95 can do together in the same space. It’s not going to be overwhelming for anybody, even those trying golf for the first time.”

Part of the group of San Diego municipal golf courses that includes Balboa Park and Torrey Pines, Mission Bay GC could not be more centrally located. Its northeastern holes sit near a busy intersection just off Interstate 5. The shores of Mission Bay — and the cool breezes that come with it — are only a short walk away.

Driving into the parking lot, the first impression isn’t great, because the condemned clubhouse is an eyesore. For years, the city has said it would be torn down and replaced, and it seems as if that work is finally on the way, with millions of dollars in the coffers for improvements that are firmly on the table, according to city golf manager Mark Marney.

Walk around the clubhouse, however, and there’s a bit of paradise waiting. Yes, there is an empty pond and concrete island that need refurbishing, and the only food and drinks available are from a small kiosk, but the rest of the grounds are well kept and inviting.

The driving range is large and features a rarity at many facilities these days — real grass to hit from. (There is a small portion with mats, but those seem to be used mostly by beginners and kids.) Marney contends that the range balls are among the best in the county. The city even has an app that measures yardages for more accurate shot measurement.

In another area is a two-section green that occupies space that was once a miniature golf course. There is plenty of room to pitch balls, and even a bunker from which to practice. It’s busy most days, and Howard notes that the area is free to all.

Jenny Liu is a golf instructor who has been teaching at Mission Bay for more than a decade. She said it’s a prime place for junior golfers because of the amenities and the golf course, which is flat and not overly demanding. She notes how affordable it is, considering juniors have access in the afternoons for only the cost of a $10.50 monthly ticket.

“It’s a really good facility for juniors to get started on,” Liu said. “They learn how to behave, hit second shots, enjoy the time with their parents.”

With more improvements coming, including possible range bays with simulators, Mission Bay figures to be a hot spot for years to come. And its wide variety of denizens couldn’t be happier.

Golf For The Greater Good: The Golf ...