Gooood moooorning, Death Valley! The local time is 5:30 a.m. on the summer solstice, the sun is beaming its first rays on the Panamint Range and the current temperature is already a blazing 92 degrees… and steadily rising!

Never mind heating up a morning beverage. I was on a golf mission and, considering the thermometer had climaxed at a blistering 126 degrees the previous afternoon, I rushed to the first tee at Furnace Creek GC to play the first of 36 holes, starting with 18 at 214 feet below sea level and finishing at 8,000 feet high in the Eastern Sierra … in one day!

In my quest for an out-of-the-box golf adventure, I searched no farther than California, one of the planet’s most diverse geographical settings with mountains, valleys, forests, coastline and desert. And with more than 1,000 golf courses planted throughout the Golden State, these are two 18-hole experiences set among the most contrasting landscapes imaginable.

FURNACE CREEK
Furnace Creek GC in Death Valley National Park, approximately 265 miles east of Los Angeles, is recognized as the lowest course on earth, while its antithesis, Sierra Star GC, at Mammoth Lakes, is California’s highest elevated 18 holes. With a 200-mile distance between the courses, the light bulb clicked on.

“Think left and think right and think low and think high. Oh, the thinks you can think up if you only try,” Dr. Seuss once professed. 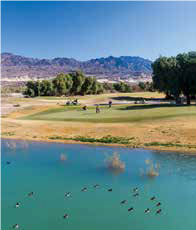 Assisted by the year’s longest 24-hour cycle, I — along with my son and two friends — ventured to play what we’d later refer to as the “hell to heaven golf adventure.”

With eyes half open at the starting blocks, I couldn’t help but wonder what sane human would voluntarily spend four hours outside on the first day of summer in the lowest, hottest, driest place in the Northern Hemisphere smacking a dimpled ball around a desert inferno. The first ominous sign should have been the T-shirts in the pro shop emblazoned with a golfing skeleton.

Nevertheless, for us city slickers, aside from staying hydrated, our primary objective was not carding an 18-hole score matching the temperature. However, right from the get-go, one of us (hmmm, who could it be?) appeared heading that direction with an opening tee shot soaring a whopping 50 yards. Clearly an indication of how the negative elevation affects ball distance.

There are a multitude of wonders unique to Death Valley, a land of raw beauty that’s been twisted, uplifted, re-formed and buried by powerful geological forces over millions of years. It’s also the last place one would expect to find a golf course, let alone understand how one could survive in such an ill-suited environment.

Yet, Furnace Creek has been attracting golfers since 1927, when date-palm farmers built three holes. Four years later it expanded to nine, and in 1968 renowned course architect and SCGA Hall-of-Famer William F. Bell (Torrey Pines GC) added nine more. In 1997, Perry Dye was commissioned to renovate the course to give it a resort-style quality and add enough bite to earn the last spot on Golf Digest’s America’s 50 Toughest Golf Courses.

With preconceived images of parched fairways and greens, players traversing the 6,215-yard, par-70 layout — plus, a drive-thru bar/restaurant at the turn — are pleasantly surprised by the lush conditions afforded by the endless water sources from recycled systems. When you subtract the heat, it’s hard to believe you’re playing desert golf. Several hundred species of migrating birds, plants and coyotes also thrive here, making this oasis a certified Audubon Cooperative Sanctuary.

SIERRA STAR
After sinking the final putts, we hightailed to our respective vehicles faster than Wile E. Coyote to hit the pavement toward higher ground. Following a gradual ascent
from Death Valley, we motored north on U.S. Route 395, enjoying majestic vistas of the jagged Eastern Sierra and Mt. Whitney, eventually arriving at Sierra Star and the four-season recreational playground of Mammoth Lakes with plenty daylight to complete the dawn-to-dusk marathon.

With bodies still simmering, we were welcomed with 80-degree temps and mountain air embellished by the resin scent from towering Jeffrey pines. Before teeing off on the 6,708-yard layout, the
first order of business was a new game plan! Given the greater ball-flight distance at 8,000 feet, it was necessary to rethink club selection.

“It’s awesome for the ego,” says Dave Schacht, head professional at Sierra Star GC. “If you flight the ball higher, it stays in the air longer and just kind of floats. If hitting downhill, downwind, down grain, you really have to pay attention.”

Choosing the correct tees at the Cal Olsen design (1999) can be just as critical and may mean having to sacrifice distance in favor of accuracy for navigating subtly undulating
and tight fairways cut through dense forest with a variety of doglegs. Shot placement — and a yardage guide — is key to a good score. 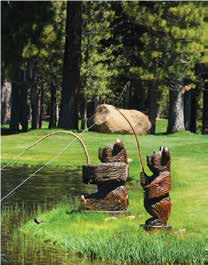 Perhaps most importantly, be aware of bears known to traverse the fairways. Fortunately, the only ones we encountered when we were there were the whimsical, life-size wooden sculptures strategically positioned around the course.

By the time we reached the home stretch with several testy holes trying our patience, we were chomping at the bit to finish our day’s 36th hole and belly up to the 19th — er, 37th — hole for celebratory libations and tales.

Fittingly, let the record show I fired my low round (84) at Furnace Creek and my high (86) at Sierra Star. But really, scores were a nonfactor, as this trip was all about California dreamin’ and a bucket-list challenge that showed us the highs and lows of golf, all in one day. ▪