Spring 2018State of the Game
Home›Issues›Spring 2018›Crisis Watch: A Solution Looking for a Problem

Crisis Watch: A Solution Looking for a Problem

The 10 plagues of Egypt? The Black Death? Pac-12 hoops and football? Please. We have a CRISIS on our hands, people. The golf ball goes too damn far. Not mine. Not yours. But it goes too damn far, and civilization hangs in the balance.

“Increases in distance can contribute to demands for longer, tougher and more resource-intensive golf courses at all levels of the game,” wrote the USGA and the R&A in introductory comments to a March-released research piece assessing driver distance. “These trends can impact the costs to operate golf courses and put additional pressures on golf courses in their local environmental landscape. The effect of increasing distance on the balance between skill and technology is also a key consideration. Maintaining this balance is paramount to preserving the integrity of golf.”

Boom equals doom, so we need a scaled-back golf ball.

None of this is brand spanking new; golf’s two ruling bodies have been assessing for years how far the rock goes on professional tours. And some of the most luminous luminaries of the game — Jack Nicklaus, Tiger Woods, Greg Norman, Gary Player and any number of the game’s “stewards” — have for years been lamenting the long ball rendering obsolete many of the game’s grandest courses and historic performances.

It just seems to be coming nearer a frothy head now. For in a matter of hours after the research was released, the PGA TOUR, PGA of America and several of the largest equipment companies immediately launched countermeasures.

Announced David Maher, Acushnet president and CEO, in what was a typical, that-side-of-the-industry — you know, the entertainers (TOUR), the public interfacers (teaching pros, green grass shop operators, course managers) and ball- and clubmakers — reply: “As a leader in the golf equipment industry, our team is conditioned to evaluate data to best understand contributing factors and root causes. It is with this intent that we analyze the 2017 Distance Report, and our findings continue to support the fact that equipment regulations have been effective.”

Added TaylorMade Golf CEO David Abeles: “We are optimistic about golf’s future and we believe that the growth initiatives our industry has invested in are beginning to drive participation momentum in our sport. Any separation from the rules or any step backward in performance would be disadvantageous to the growth of the game.”

The genie has been out of the bottle for a long time and what we’ve seen since — in the face of quantum-leap equipment advances and, easily as important, better athletes who choose kale smoothies over Marlboros — is a slow creep.

In other words: It’s a solution in search of a problem, so hands off the golf ball.

The USGA/R&A lit the fuse using data that shows an incremental 2.2 percent increase in average driving distance on the PGA TOUR, European Tour, PGA Tour Champions, Web.com Tour and Japan Golf Tour from 2003 to 2017. The increase was greatest on the bomber-friendly Web.com Tour, which no longer is the haven for older players hanging on, instead existing as the young-stud, open-courses, fire-and-find feeding ground to the PGA TOUR. The two women’s tours (LPGA, Ladies European Tour) saw an increase of only 0.75 percent.

What seems to be chapping the blazers is that a historic yearly average 0.2 yard increase jumped to 3 yards (on average) between 2016 and 2017.

Acushnet went for a deeper dive, pointing out that for PGA TOUR venues that remained the same from 2016 to 2017, the available data shows a driving increase of only 0.5 yard. New-hosting venues averaged eight-yard driver-distance increases over the previous year’s venues. Players didn’t go all Hulk just for those eight events, now did they? Furthermore, huge yardage gains were seen at three of the four 2017 majors venues, capped by an increase over 2016 of 20.4 yards at voluminous Erin Hills over classic-and-cranky Oakmont (U.S. Open). Augusta National showed a slight fallback for 2017.

That tells you that players can crank up the distance when it’s strategically to their advantage, but are intelligent enough to dial it back on courses where placement matters more than distance. 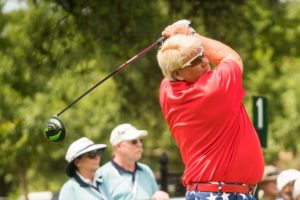 The year 2000 was the watershed, as that was when the Pro V1 was introduced, followed by other modern, non-wound, multi-piece balls. The genie has been out of the bottle for a long time and what we’ve seen since — in the face of quantum-leap equipment advances and, easily as important, better athletes who choose kale smoothies over Marlboros — is a slow creep.

As it is, you really have to swing fast to get all the pop available out of this supercharged stuff. And that’s why Joe and Joan Public Player shake their heads when the poobahs claim the ball goes too far. We simply don’t get as much of a kick out of the ball and the equipment as elite players. It all comes down to clubhead and ball speed: the faster you swing, the more incremental performance you get. The new gear does help us because the ball doesn’t spin off line as much and clubs still perform even when slopped all over the face. We’re just not Daly-esque. R&A data shows that average (male) golfer driver increase is a paltry eight yards since 1996, with an average max drive of 208 yards.

By all means, let’s ratchet that back 20 percent.

The barn door was left open 20 years ago, and the data suggests that even with a host of continuing improvements in equipment, players and course conditioning, that colt no longer bolts.

Might there be a “competition” ball for the infinitesimally small percentage of those who excel at the sport? Perhaps. A Masters Maxfli seems most within the realm of possibility simply because Augusta National wields absolute discretion, and like CBS, players will put up with a lot of demands to get the gig.

But it is silly, the tail wagging the dog.

Does it matter HOW someone shoots 60-whatever, as long as it is compelling, and against players of similar peerage? Putting it another way: Hickory and the guttie were high-tech when Baltusrol opened.

Historic relevance, honoring tradition and par, stewarding dollars — that is what reputedly is at stake.

Time and money? It ain’t the golf ball making courses run out to 8,000 yards and rounds to six hours, that’s the PGA TOUR letting guys mill over a shot for a week, and then still lay up; it’s developers and tournament hosts wanting baddest, longest, greenest. (It’s also a function of average player self-importance and course operators not having the guts to get players on the correct tees and keeping them there, or nudging them along when they are two holes behind.)

Respecting Ben Hogan’s 1-iron? Bubba Watson’s wild-wing gap wedge would not have been better TV, better golf, if equipment and ball limitations would have forced him to pitch out and then pitch up.

Equity in the professional ranks? Power always has been rewarded in the game, be it Jim Barnes or Sam Snead, Arnold Palmer or Fred Couples. Take Norma, Tiger and Jack getting out in front of a lessened golf ball. There is some irony that in their respective days those three were the longest bashers of the ball. Yes, the equipment was different. But they did separate themselves from their peers, as long hitters do today, with all players having access to the same gear. So how did they do it? They worked harder, smarter and better, and they had innate physical prowess denied others. Sounds to me like today’s gunners.

Protecting Shinnecock? Par is relative through time because the competition is time-relevant. Does it matter HOW someone shoots 60-whatever, as long as it is compelling, and against players of similar peerage? Putting it another way: Hickory and the guttie were high-tech when Baltusrol opened.

Historic context? Those who think we need to memorialize or protect certain pinnacles of golf athleticism and prowess might want to consider what Jean-Claude Killy had strapped to his feet when he ruled his athletic world and that Bill Tilden and René Lacoste went at it with what by today’s standards were squash rackets.

Rollback? To what and when?

Indy was not better when it was brick, the cars averaged 82 MPH and mechanics rode on board.