It was Tuesday before the Masters when Brooks Koepka uttered a comment that told you what you need to know about him. He had outdueled Tiger Woods at the PGA Championship in St. Louis the previous fall and was asked what it would mean if Woods won another major (which, it turned out, he did a few days later). Koepka chuckled and remarked that he’d probably ruined everybody’s dream at Bellerive by denying Woods a long-sought 15th major championship. Then Koepka delivered the punchline: “I enjoyed stopping history.”

Of course, those players rarely got the better of Woods. Koepka holds a better hand now and he knows it. He enjoys stopping history? That is the definition of confidence.

Koepka has that thing, that special ingredient. We used to call it guts, but I’m sure there’s a more sophisticated psychobabble term for it.

There’s a fine line between believing you can perform and knowing you will perform. Woods knew, Tom Watson knew, Jack Nicklaus knew. Koepka knows. In basketball terms, he’s the player who wants to take the buzzer beater with the game on the line, and he’s the player you want taking that shot. Golf hasn’t had a closer like him since … Tiger.

Golf was already full of young guns, phenoms and some kinda-sorta young guns who were going to take over the game. Rory McIlroy. Jordan Spieth. Justin Thomas. Jason Day. Rickie Fowler. All Koepka did was come in without much of a pedigree and, within three years, brush them aside like tumbleweeds.

I’m not always a great prognosticator. My shares of Enron stock and my timeshare in Chechnya prove that. But I picked one major winner correctly in 2019 and just missed getting the other three right, too. Why? After Shinnecock Hills in 2018, Koepka became my default pick to win every major until further notice.

The hoopla around Woods winning another Masters helped obscure how close Koepka came to a multi-major year, maybe even a potential Grand Slam pursuit.

Let me refresh your memory.

At the Masters, Koepka finished second, 1 stroke behind Woods. One unlucky gust of wind caught Koepka’s shot at Amen Corner and cost him a double-bogey at the 12th hole in the final round. If there’s no gust and Koepka makes par there, hmmm, maybe he stops history again. 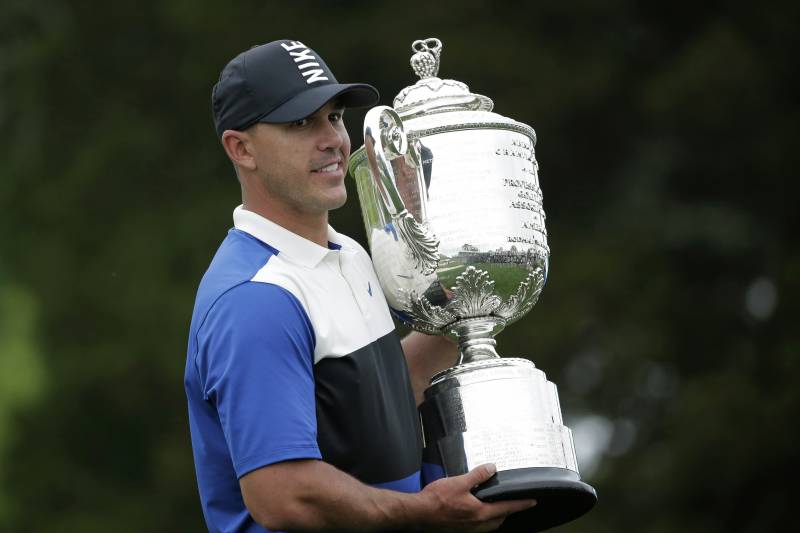 The PGA Championship in May at Bethpage was a runaway until a windy final round, but after a few clutch shots late in the round, he closed the deal.

The U.S. Open at Pebble Beach was proof of what Koepka, a native Floridian, has said about poa annua greens — he genuinely dislikes them. He suffered a slew of near-misses on makeable putts through the first 54 holes and, despite that, was right there at the end if Gary Woodland had faltered. Woodland didn’t, even if he probably was the first major champion who chipped from the putting surface on the 71st hole.

Shane Lowry played so well at The Open Championship, he would have been difficult to beat. Koepka was in contention until he began the final round with four straight bogeys.

WOODS WINNING THE MASTERS was a big story, as was Rory winning the FedEx Cup, but the biggest story in 2019 was Koepka. He hasn’t simply arrived, he has taken over. The debate about who is really No. 1 has been put to rest until next year’s majors gear up.

Looking back, it’s almost laughable how long golf fans and the media ignored this guy.

It was understandable at first. He was a late-bloomer who played college golf at Florida State but didn’t dramatically distinguish himself. After school, he decided he wanted to get serious about pro golf. He had no status on any tour, so he went overseas on a mission to play his way back to America and the PGA Tour.

Koepka did just that, winning four times on the European Challenge Tour (that’s triple-A ball in Europe) and capturing an official European Tour win in Turkey. He won on the PGA Tour in Phoenix in 2015 but didn’t do much after that. At first glance, it seemed, he was just a big hitter who liked lifting weights and working out as much as playing golf.

Then came the oddball 2017 U.S. Open at Wisconsin’s Erin Hills, a first-time Open venue. Erin Hills had wide fairways, the USGA hastily cut back some of the fescue at the last minute, and then rain made the course play softer and easier. Koepka outlasted Brian Harman and a late charge by Justin Thomas. Many observers simply dismissed the whole event.

A wrist injury sidelined him early the next year. He sat out the Masters and at one point wasn’t sure if or when he’d play tour golf again. Because of that absence, the defending U.S. Open champ was largely ignored when he did return at Shinnecock Hills. All Koepka did was win a second Open, the first champion to go back-to-back since Curtis Strange 29 years earlier.

Yet Koepka’s historic feat drew less attention than controversies about the greens at Shinnecock, which the USGA fouled up on the weekend after guaranteeing they wouldn’t repeat the same fiasco from 2004, and Phil Mickelson, who violated golf’s most basic rule: hitting a moving ball.

Here’s a helpful hint for future historians: The Brooks Koepka Era began at Shinnecock. It took holding off Woods at the PGA Championship in August to get the nation’s attention and, finally, vindication.

What you saw in 2019 was a special year of golf. Koepka won just one major, yes, but it was the best one-major year ever. He shot 36-under-par in the four majors, more than 20 shots better than any player who made all four major cuts.

He finished second, first, second, fifth, and if you translated that into a won-lost-tied record against his competitors, Koepka’s mark was 542-5-4.

Here’s another reason to like Koepka. He likes to deliver a message. He was paired with Woods in the first two rounds of the PGA Championship at Bethpage and shot 63-65 while Woods struggled to 72-73. Woods got smoked by 17 shots, was clearly outgunned and had to be thinking the same thing opponents once thought about him when they were paired in the early 2000s: “I can’t beat that.” There’s intimidation and then there’s in-your-face intimidation.

In the World Golf Championship in Memphis the week after The Open in Northern Ireland, Koepka and Rory McIlroy were poised for a final-round shootout in the last pairing. There was no shootout. Koepka stepped on McIlroy’s neck, as they say in my foursome. He shot 65 en route to the win and watched McIlroy fade on the front nine.

Of course, McIlroy got a measure of revenge at the FedEx Cup finale. But Koepka, only 29, has already made a mark with four major championships. He wants more. Before this year’s PGA Championship, he admitted he is chasing majors and said, “I don’t see why I can’t get to double digits.”

It was a bold comment, and many golf observers debated the possibility of Koepka getting to 10 majors. Not so fast, talking heads. Koepka didn’t say 10 majors, he said “double digits.” He didn’t specify.

Who says he’s limiting himself to 10? My wallet says he’s aiming at Woods, with 15 majors, and Nicklaus, with 18. But he was smart enough not to say those things out loud.

Koepka enjoys stopping history. He’s even better at making it.