Redondo Beach native Robynn Ree has shown a lot of resilience in her brief golf odyssey. Often sharing the marquee with SoCal’s blue chip crop of junior girls in her formative years, the 2015 grad of Redondo Union High School swung through her prep career dueling against some of the country’s top talent and dealing with a growth spurt that saw her rise six inches between her freshman and sophomore years of high school.

“It was hard; the players in my year, and also the years above and below me, were so good,” Ree says. “I just wanted to play golf that was fun for me; and I never really thought of the others as competitors because I didn’t want to put that burden on myself.”

As she adjusted to her new frame, Ree often put the burden on others, earning AJGA All-American first-team honors in 2014, along with a co-medalist showing in the SCGA’s CIF-Southern Section individual championship that same year.

“The SCGA is awesome, helping kids grow in golf and putting together great local and regional tournaments, especially for young players who don’t have access to travel to compete in national tournaments,” she says. “There’s a lot of opportunity to grow with SCGA.”

En route to collegiate golf at USC, Ree’s fondness for the SCGA shone further with a runner-up finish to long-time friend Andrea Lee at the inaugural SCGA Women’s Amateur Championship in the summer of 2015.

She continued to define her place among the lead pack while a freshman at USC, earning four top-10 finishes and a win at the Gold Rush event in Seal Beach before earning first team All-Pac-12 and WGCA Second Team All-America honors.

Her hot play carried over to that summer, when she qualified for the U.S. Women’s Open at CordeValle and missed the weekend by a single shot.
In her sophomore season at USC, and in what would ultimately prove her final college event, Ree added another title to her mantle, earning an individual win en route to a team title at the prestigious East Lake Cup in Atlanta.

And yet, Ree’s time at USC wasn’t without its tumult; she was paired with a woeful roommate in her freshman year, which saw her forced to move out of her dorm into a hotel, before again being moved to different lodgings.

Her career arc taking shape and her college living situation proving a predicament, Ree elected to toe the waters of 2017’s LPGA Tour Q-school as the fall semester of junior year got underway. “I looked at it as an experience,” she says. “And, obviously, things played out better than I thought they might.”

SHE JUST PLAYS HER GAME AND DOESN’T WORRY ABOUT ALL THE OTHER STUFF. SHE’S NOT AFRAID, AND SHE’S GOT THAT COMPETITIVE EDGE.” – Coach Craig Chapman

With no earnest intention of turning pro, she steamrolled through her Q-school experiment, ultimately finishing tied for fifth at Stage III in Daytona Beach, Fla., a result marking her by far the event’s top amateur.

The finish found Ree an amateur no more, as she went from Q-school sampler to LPGA rookie in a matter of six weeks.

STEADY AS SHE GOES

The transition instantly tested her ever-present smile. “It was extremely overwhelming,” she says. “Just that ‘pro’ title, it was a lot of pressure. And when I was playing, I started getting bad anxiety, and it was a hard year; I wasn’t adjusting well.”

Ree says she’s always played her best golf when having fun. Being a professional doesn’t always make that easy.

“It’s not all fun and games,” she says. “You miss a putt, and it’s $10 thousand out the window. And being on the edge of keeping my card the whole season, it was even more pressure; thinking that a missed putt would lose me my card. Those kind of thoughts were always in my head.”

Across her 21-event season, Ree finished with nine cuts made and one top-10 while showing a solid tee-to-green game.

“For the first year, for most anybody to jump in there and be surrounded by the best players in the world is tough,” says Ree’s Palm Springs– based swing coach, Craig Chapman. “She jumped right into the fire.” 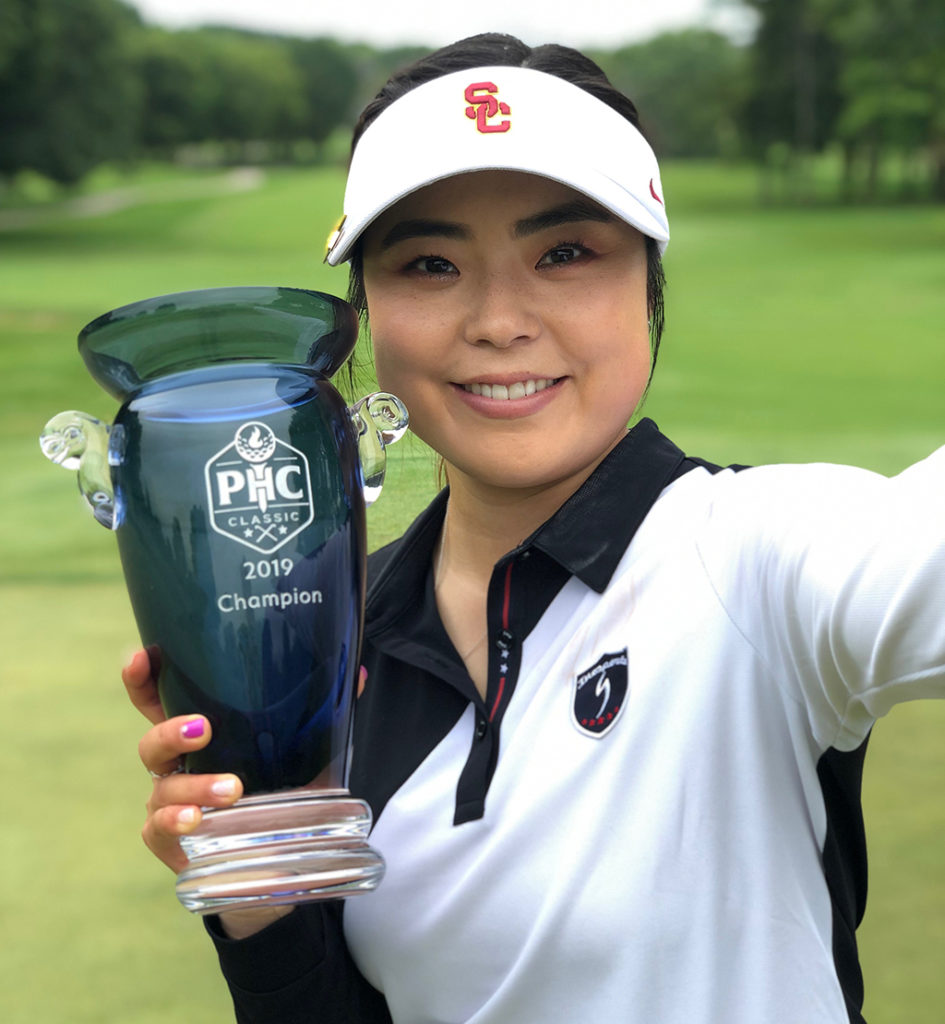 In retrospect, those handful of lip-outs across nine months of play may have been a blessing.

Playing with Symetra Tour status in 2019, Ree’s glee has returned amid the lower-key environment.

“Honestly, it was even a little more pressure for me at first, because I came from the LPGA; so it kinda says that I should be having better results than the players who came up through Symetra,” she says. “It creates expectations, and it can be disappointing if those aren’t met with results.”

Ree’s seasonal Symetra scorecard would seem to have met those high expectations. From the season’s late-March start, Ree’s LPGA experience showed instant returns. She’d record a tie for 21st at Tukwet Canyon before top-10 finishes in the pair of events ensuing. Come the close of May, a tie for fifth at the Zimmer Biomet Championship hosted by Nancy Lopez set the tone for a sizzling summer.

“Toward the middle of the year, my mind became clearer, and it was more one shot at a time,” Ree says.

“She goes about her business and really doesn’t care what anybody else is doing,” says Chapman, who has worked with Ree for more than a decade. “She just plays her game and doesn’t worry about all the other stuff. She’s not afraid, and she’s got that competitive edge.”

Ree’s mother, Helen, serves as her caddie for most events.

“After the [Danielle Downey Credit Union Classic] event in Rochester in the middle of July, my mom and I went to see Niagara Falls, and just had a few chill days off,” Ree says. “Then she went back to L.A., and I was in Albany by myself for the CDPHP Open the next week. And I just found this peace.”

The rediscovered tranquility saw Ree shoot 67-66-67 for a 1-shot victory over a trio of competitors to earn her first professional win. Two weeks later, with her mom back on the bag, Ree stayed hot with rounds of 67-66-66 for a commanding 3-shot win at the PHC Classic in Milwaukee.

The back-to-back wins marked Ree as one of only two players on any major tour to claim consecutive crowns in 2019.

Despite the pair of titles and her rush up the Volvik Race for the Card standings — which awards LPGA status to the Symetra’s top-10 money winners — Ree isn’t about to let the homestretch of the season get sloppy.

“After I got that second win, a lot of people were telling me that I had my LPGA card locked up,” she says. “But the competition out here is really deep, and I think that the 10th spot might be $10,000 more in earnings than last year. So, yeah, I should feel comfortable, but it’s in the back of my head that it’s not over until the last putt drops.”

Even with a spotless 18-for-18 line in made cuts and leading the Symetra in rounds in the 60s (27) heading into the season-closing Symetra Tour Championship, Ree continues to be fueled by the lessons of her rookie year.

“People think it’s going to be so much better when you’re on the LPGA Tour, but I think it’s mentally harder,” she says. “You’re not chasing after somebody, you’re being chased.”

But then again, Robynn Ree has shown a mental toughness and resiliency that is certain to endure. All she needs to do is keep smiling.