It’s All About The Water

It used to be that when golfers got together to discuss affordability and accessibility, they were talking about green fees, initiation rates and monthly dues. Now they’re talking about water.

Whether compliance with drought contingency ordinances, cutbacks in allotments, access to recycled water or use of groundwater, virtually every golf course in California is developing its business plans, capital outlays and strategies around water — how to acquire a reliable supply of it and then use less of that supply to accommodate prices that continue to escalate.

The current drought may have accelerated this shift in focus, but it hardly created it. The industry began to adopt water as a central organizing business principle long before the current drought and will continue to obsess on the subject long after Mother Nature again graces the State of California with rain and snow.

The industry has done much to help itself in recent years, including adopting state-of-the-art irrigation systems, computer-controlled applications, on-site weather stations, turf reduction strategies, sophisticated wetting agents, drought-tolerant grasses, recycled water and curtailed over-seeding regimens. But the industry can only do so much to counter accelerated reduction protocols and rising prices; it needs help.

Happily, such help has been forthcoming. 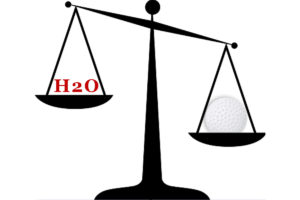 Because of the lopsided ratio of ratepayer to golf course in the Coachella Valley, the water districts in the lower desert have not provided a parallel subsidy for that region’s 123 golf courses — until now. The golf industry’s ongoing focused dialog with desert water districts has yielded an inaugural turf buyback program.

Whether in the Coachella Valley or other golf-rich regions of Southern California, that focused dialog with the game’s regulators has secured means other than day of week/time of day restrictions for compliance with mandatory conservation targets. They have different names in the laws and regulations of the region, but whether called “alternative means of compliance” or “alternatives for large landscapes,” they all have one thing in common: They enable the golf industry to comply with mandatory cutbacks while retaining 100 percent control over irrigation practices — a veritable lifeline during a prolonged drought.

After four years of wrangling and delay the legislature has placed a $7.5 billion Water Bond on this November’s ballot. Perhaps as a sign of its importance, it appears as Proposition 1. The Bond allocates $2.7 billion for storage, $725 million for recycled water and just shy of $1 billion for groundwater sustainability — all three of which are high priorities for the golf industry. With strong support from Governor Brown, a 114-2 combined vote in the legislature, and an electorate focused on the prolonged drought, the Bond has a strong chance of passage, despite the public’s distaste for adding more debt to the state’s general fund.

But perhaps the biggest heaping of “help” the industry is currently receiving comes from an unexpected place — the media. Years of concerted effort to shout out the game’s real conservation and environmental record seems to have paid off — at least in the southern part of the state. Once a pariah, golf is now the beneficiary of fair and accurate reporting, and that makes all the difference in the world when it comes to securing positive outcomes in the public arena.

Mark Twain is credited with the famous quip, “Whiskey is for drinking; water is for fighting.” The golf industry now has weapons and friends in this fight.

Under the Radar Services