These days, Greg Padilla is the quintessential family man. Sure, he’s got a great job that takes him around the world, and manages to find time to hit the links, but at home it’s all about spending time with his family. 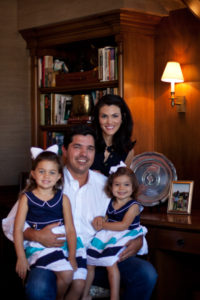 “I’m surrounded by girls, but I love it,” said Padilla, who lives with his wife, two daughters and the family dog. “The dog is even female, and I’m pretty sure the two fish are too! But I couldn’t be more blessed.”

And while getting married and having kids took Padilla’s love for family to a new level, it’s nothing new. In 1998, when Padilla won the SCGA Amateur Championship, he had “one of the most special days” of his life due to his family bonds. Padilla’s grandfather, who was a huge part of his childhood, caddied for him in the final round, and was there when his grandson hoisted the trophy.

“To have my grandfather there, as well as the rest of my family, was incredibly special,” said Padilla, who still keeps a photo of him and his grandfather from that day in his home office, next to the SCGA Amateur Championship plate.

The memorabilia hold such prominent position in Padilla’s household due to the growing magnitude of that Championship victory. Despite occurring more than 15 years ago, the win has become even more special to Padilla over time.

“The more time that goes on, the more proud I am of winning it,” said Padilla. “When you have that type of success you think you’ll do it again and again, but then you look back years later and realize that one time was such a big deal. I mean looking at the trophy and seeing Tiger Woods’ name a couple away from mine? That’s special.”

But Padilla did have golf success after the ’98 SCGA Amateur. Following the victory, he went on to have a successful senior season at Arizona State University, securing a collegiate victory and making the decision to turn professional. He spent three years playing professionally in Australia/Asia. 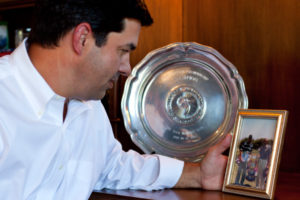 “My professional career was hugely unsuccessful, but a wonderful experience,” Padilla said. “I’m proud I gave myself a shot. I majored in finance, knew I wanted to get into the business world, so I gave myself three years and said, ‘If I can’t get into the Top 100 I’d hang it up.’ I stuck to that.”

“I didn’t hate the game or anything like that, it was just my way of saying, ‘that was my past. I’m taking a new step forward.’”

He didn’t play for two years, instead focusing on building a career. Padilla went to business school and got a job at a firm in Los Angeles. But after settling into his new lifestyle, his love for the game crept back.

“These days I try to play about once a week,” said the Los Angeles CC member. “I’ve fallen in love with the game again. I don’t play for work. I don’t entertain clients on the course and I rarely play competitively. But I love to play and enjoy the game with friends.”

“My girls aren’t playing yet, but I’m hopeful. I’d love for them to play,” said Padilla. “The positive attributes I’ve learned from golf have carried through to my life. I don’t think there’s another sport where you get that to that degree. I’d love for my kids to experience that.”