Spring 2017
Home›Issues›Spring 2017›Rolling the Rock: The Quirky Intersection of Golf and Rock & Roll

Rolling the Rock: The Quirky Intersection of Golf and Rock & Roll

What is it about the genteel game of golf that attracts some of the rock & roll world’s most extreme characters? Not that anyone in their right mind would resist a day away from screaming guitars and groupies and the like, but isn’t that when a proper rock-star ought to be holed up in a seaside bungalow with a suitcase full of illicit substances and a gun to shoot at the television set?

Threadbare clichés aside, it was admittedly rather jarring to have learned many years ago that one of the all-time perverse purveyors of sex, drugs and the lascivious life, Alice Cooper, was not only playing golf daily, but was a near-scratch handicap! That’s tantamount to finding out that the Dalai Lama shoots hummingbirds in his spare time, or that “Mister Rogers” actually couldn’t stand little kids!

Truth be told, it’s kind of refreshing to find our cultural heroes playing against type once in a while, but maybe golf and pop music aren’t such strange bedfellows after all. Think back to the early years of the music racket and you’ll find the biggest stars of the day wielding mashies and wearing plus-fours. SCGA Hall of Famer Bing Crosby was the poster-boy of the heather-and-gorse set for many years, even cutting a song in 1960 called Straight Down the Middle, replete with sound effects of a nice crisp drive off the tee! No, it was not a hit.

Nowadays, every last corner of the Billboard charts has a few golfers in its ranks: Kid Rock from the rock and roll camp; Vince Gill repping Nashville; herbalist Willie Nelson not only plays, but also owns a nine-hole course, and easy-listening jazzman Kenny G. swings as smoothly with a 5-iron as with his beloved soprano saxophone. In his case, a country-club lifestyle makes sense … he wouldn’t want a sport like rugby that might mess up his signature flowing mane!

And I might as well fess up myself: Before I was lucky enough to find part-time employment as a golf scribe, my own pop band, Was (Not Was), scored a small handful of hit records, enabling me the luxury of writing about the game I have hacked away at avidly since I was 13. So, I can tell you firsthand, from the heart, what drew me to both sports and music from early adolescence onwards: the opposite sex. Huge surprise, eh?

What red-blooded, mid-century American lad didn’t dream of growing up to be Johnny Unitas or Mickey Mantle, or in the case of a Detroit boy like myself, hockey legend Gordie Howe? Peace-time teens didn’t have war heroes on their radar, so sports figures perforce constituted our vision of a testosterone-powered future, one in which we were the envy of every cheerleader-perfect female, jumping and shrieking as we scampered toward the end zone with the clock running out. 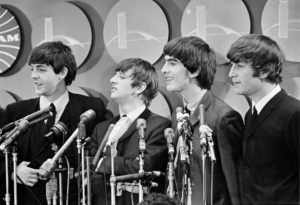 And then on Feb. 9, 1964, every lad’s pipe-dream of a glorious future changed forever: The Beatles made their first American television appearance on The Ed Sullivan Show. There were no beefy defensive tackles trying to break their necks, nor did they have to try and lay a bat on Sandy Koufax’s serpentine curveball, yet a mad swarm of hormone-crazed females were screaming and rending their petticoats every time one of those mop-topped fops shook their coiffes!

I rode my bicycle to the record shop the following day and bought Meet the Beatles, then mercilessly pestered my parents for a budget guitar and some lessons, thinking that in no time at all, I too would be plastered on the cover of Tiger Beat or 16 magazine! Sure, I still read Sporting News and Sports Illustrated, but I never once pictured myself peering out at potential conquests from the pages of Golf Digest! I wanted to emulate Bob Dylan — not Bob Goalby!

A LITTLE SCIENCE TO THE BREW

Hey, little did I know then that the PGA TOUR of the 1960s was as riddled with eager groupies as an Iron Butterfly tour! Years later, devil-may-care athletes like Tiger Woods and John Daly were merely carrying on a proud tradition of serial philandering that hearkened back to some of the game’s most august figures. We won’t name any names, but one such legend’s loyal “Army” was bearing weapons no more lethal than estrogen and Jungle Gardenia perfume. Hey, at least Gary Player wasn’t a playa – there were a few true gentlemen back in the day.

But let’s add a little science to the brew while we’re trying to figure out common ground between athletes and artists. Recent research reveals that genes themselves play a much smaller role in the fate of our most accomplished peers, but that a dedication to “serious” practice habits carries the day. There is no gene for greatness in music or golf, as it turns out, making the joke about “directions to Carnegie Hall” as true as it is funny: Practice, practice and more practice is a more reliable route to stardom than having Superman DNA.

So it kind of makes sense that the same kind of person willing to spend the afternoon running scales up and down the neck of a guitar might just have the patience and discipline to master the intricacies of keeping a golf ball in play. Ted Williams’ family froze his DNA thinking they’d sell his giftedness to the parents of would-be sluggers in a hundred years, but anecdotal evidence suggests that the “Splendid Splinter” was never without a bat in his hand, from dawn until dusk and beyond. Perspiration trumps inspiration again.

Which is why those of us without enhanced environmental factors (encouraging parents, etc.) to accelerate our inherited genetic material wind up being air guitarists instead of Eddie Van Halen (a mediocre golfer, by the way), or 16-handicappers instead of savants like Tiger Woods or Jordan Spieth. And it’s also why we tend to venerate such obsessive craftsmen, no matter their personal peccadilloes or offstage antics.

Musicians and athletes have much in common as it turns out, but few excel at both pursuits given the finite number of hours in a day. If you’d like to join their exalted ranks, here’s the sobering math: 10 years of practicing 20 hours a week will make you competitive against the world’s best, be they chess-players or bass-players. After that, you’re on your own, cowboy!

Who would you rather be — Ben Hogan or Benny Goodman?