Wayne Gretzky is often referred to as the greatest hockey player of all time, and considering the fact that he holds virtually every major scoring record, his talent on the ice is unquestioned. Four Stanley Cups, 15 All Star game appearances, first ballot Hall of Famer and a nickname reserved for the undisputed best: The Great One.

But there’s still one glaring omission on the long-time SCGA member’s sporting resume and it’s a bit of a sore subject: the Member – Guest title at Sherwood CC.

“I’ve lost in a playoff three times,” Gretzky said, shaking his head. “I always tell everyone it’s harder to get my name downstairs on the wall than on the Stanley Cup.” 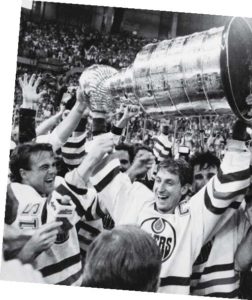 FROM CANADA TO L.A.

The kid from Brantford, Ontario, made his debut on the ice for the Edmonton Oilers in 1979, during a time in the NHL when his relatively small and slender 150-pound frame would not be a barrier to success.

“The era I played in was perfect for me,” said a reflective Gretzky. “Today, the players are bigger, faster and stronger, while the guys back in the ‘50s and ‘60s were probably a bit tougher. My emergence came at the perfect time.”

Gretzky also credits his meteoric rise to the personnel situation in Edmonton at the time of his arrival.

“I was lucky going to the right city with the right coach who didn’t try to change me,” he said. “Coach [Glen] Sather’s style and system made me better and playing with five Hall-of-Fame players during that run was fortunate.”

After an incredible run of four Stanley Cups in five years with the Oilers, the unthinkable happened: Gretzky was dealt to the Los Angeles Kings in a blockbuster trade that not only shook the NHL landscape, but the entire sports world.

“At that moment, I was just sitting there wondering, ‘How did we get here?’” he said, showing some emotion at the memory. “I played the best hockey of my life in that playoffs. But the more you’re around; the more you understand the business side of professional sports.”

“I’VE LOST IN A PLAYOFF THREE TIMES,” GRETZKY SAID, SHAKING HIS HEAD. “I ALWAYS TELL EVERYONE IT’S HARDER TO GET MY NAME DOWNSTAIRS ON THE WALL THAN ON THE STANLEY CUP.”

Luckily for Gretzky, his relationship with the Oilers had progressed over the years to a point where the two parties could have cordial conversations about his future in the lead-up to what’s now known as The Trade.

“The situation was narrowed to two teams: Detroit Red Wings and Los Angeles Kings,” explained Gretzky. “Believe it or not, I was dead set on Detroit and felt it was the best place for me with my affinity for Gordie Howe and their strong core of young players. But my dad was actually the one who stepped in and told me that he really felt I should be in Los Angeles.”

About three weeks before Gretzky was traded to the Kings, he had married actress and competitive dancer Janet Jones in what the Canadian Press had dubbed The Royal Wedding. She was based in Los Angeles and Gretzky had spent parts of his summers in the area.

“People thought Janet was the driving force behind my move to Los Angeles,” he said. “But in reality, we were both ready for Detroit when my father stepped in and pushed for Los Angeles.”

A FAMILY OF ATHLETES

Soon after settled in his new hometown, Gretzky rekindled a childhood passion and took his other set of sticks to the newly established Sherwood CC in Thousand Oaks where he immediately found himself amongst a cast of characters.

“The first day I walked in and they had about six lockers,” said Gretzky. “Two of them were President Reagan and Jack Nicklaus. I thought to myself, ‘Alright, this seems to be a solid club.’”

Not long after, he and Janet — the first female to grace a FORE magazine cover — built their mansion atop a bluff overlooking the entire property. It was here, amongst the exposed mountaintops, that they fell in love with Sherwood and the game of golf that was showcased below.

“Janet had never picked up a golf club before we got together,” Gretzky said. “She’s a competitive person herself and has come to foster an even bigger passion and love for the game than I have.”

With Wayne sporting a solid 7.0 handicap, and Janet a respectable 18.1, the couple naturally raised a golf-rabid family of five children. 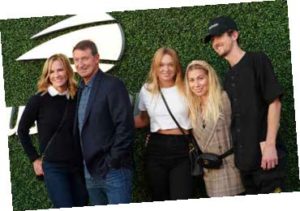 “All five of our kids were great athletes,” said Gretzky. “They all played golf at one time or another. One of the great things about our life back then, and still today, is no matter how busy our lives get, we still find time to play together nearly every day.”

Blessed with a sporting gene pool, the Gretzky children have thrived in golf and beyond. Ty played minor league hockey, while Emma thrived on the tennis court. Trevor was a high-school baseball standout drafted by the Chicago Cubs and Tristan has been a familiar face the past few years at the SCGA-run CIF Championships, competing for Oaks Christian HS in Westlake Village. He signed to play at Pepperdine University and is now competing for a playing spot on the national powerhouse.

But it’s the oldest, and most famous, Gretzky child who was the best athlete of the bunch according to pops.

“Paulina was probably the best overall athlete,” said Gretzky, matter-of-factly. “Every now and then she’ll still come play golf with Janet and I and she can really swing the sticks.”

Paulina, who is currently engaged to former world No. 1-ranked golfer Dustin Johnson, is a household name amongst golf fans due to her steady presence alongside Dustin. His reign of 64 consecutive weeks atop the world rankings is the fifth-longest run as number one.

“Dustin and I have obviously become very close throughout the years,” Gretzky said of his regular AT&T Pebble Beach Pro-Am partner. “Anyone can hit the gym and end up a bombing machine, but it’s really his short-game improvement and his mental will.”

QUEST FOR THE MEMBER – GUEST

In the years after Paulina and DJ got engaged, Gretzky began to work with Dustin on the mental approach that was needed to reach his lofty goals.

“Dustin didn’t need my help to become No. 1 in the world,” said Gretzky. “We knew the talent was there, so as soon as I saw the same passion and fire that I had for hockey with him and golf, I knew it was just a matter of time. We just worked on stressing the need to never settle.”

Wayne loves to tell a story that perfectly encapsulates Dustin. It was less than two hours after DJ lost the 2015 U.S. Open to Jordan Spieth in excruciating fashion on the final hole. The entire Gretzky family was immediately headed to their summer retreat in Coeur d’Alene, Idaho, and Wayne was quietly booking a 7 a.m. tee time in the front seat of their car. Dustin caught wind of the plans and quickly shouted to Wayne, “Make sure you wake me up!” Gretzky shook his head and thought, “No shot. You need to rest.”

At dawn the next morning, Gretzky and a group of friends went to the course without waking Dustin. “We’re doing him a favor,” they thought. Then, while on the second tee, a ball landed three feet from the flagstick on the first green.

“Next thing you know, here comes Dustin strutting down the fairway towards us,” said Gretzky, chuckling. “He taps in for birdie and then raises his arms saying, ‘Why the hell didn’t you wake me up?’ That’s just Dustin.” 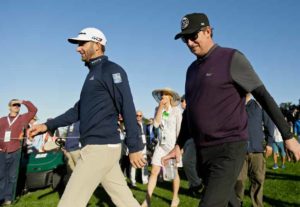 He went on to dominate the 2016 U.S. Open at Oakmont CC and continues to be one of the most dynamic players on the PGA TOUR.

Gretzky has gotten to know quite a few of the world’s best players throughout the years, as the Champions Tour’s Invesco QQQ Championship has been held at Sherwood CC for the past three years and will be held again at his home club on Nov. 1-3.

“I really admire and respect these Champions Tour guys,” said Gretzky. “I marvel at their passion for the sport and their ability to grind year-in and year-out. I’m excited for them to come out again this year and test their game at Sherwood.”

Being one of the greatest athletes of all time, with a single-digit handicap and a solid swing, the question arises: Will Gretzky take a run at the Champions Tour one day himself?

“I know the hours that you need to put into this,” he said, chuckling. “I’m not out here to try and prove anything. I don’t have the energy or mental space to put in the practice … I just want to win that Member – Guest.”