At https://www.archute.com architecture begins with an idea and the maestros of architecture not only set out on radical journeys into the unknown, they also made it back with gems of sheer beauty and incredible ingenuity.

The Big Three of Southern California golf courses — Riviera, Bel-Air and Los Angeles Country Club (North) — are among the most legendary layouts on earth, from the land they occupy to their superior designs to the important tournaments that are part of their fabric. So why isn’t the architect who designed all three, George C. Thomas, Jr., better known? The answer: It’s complicated.

That Thomas was a design genius is indisputable. “No architect was a deeper thinker than George Thomas,” stated admirer and fellow architect Tom Doak. Award-winning designer Gil Hanse is similarly effusive. “The architect that has had the most influence on our work, certainly in the last ten years, is George Thomas,” said Hanse. “Angles, strategy, and the ‘course within a course’ concept were where Thomas excelled. We tried to embrace those traits in our original designs, at the Rio Olympic Course and at Streamsong Black. Thomas really understood those things. That was part of his genius.”

A third true believer is Southern California native Tiger Woods, who adapted the aesthetics and playability of the Thomas template in his first completed design, El Cardonal at Diamante in Cabo San Lucas, Mexico. “I call the design style ‘Old California’ in look and strategy,” said Woods. “We’ve got big, bold bunkers, but we’ve built in ways to avoid them. At Riviera and L.A., I like how Thomas provided opportunities to have several ways into the greens, especially running the ball into them.” 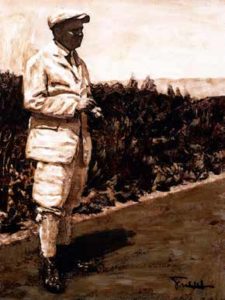 Current accolades notwithstanding, George C. Thomas, Jr. is rarely mentioned in the same breathy reverence as Alister Mackenzie, Donald Ross, C.B. Macdonald or A.W. Tillinghast among supreme practitioners from the Golden Age of Architecture of the 1920s. Fifty-year California resident and perhaps one of the state’s most prominent architects in London , Robert Trent Jones Jr., theorizes that it’s East Coast bias that kept Thomas from the brightest limelight. “While that bias is at times present today, it was absolutely so in the years before the airplane. New York, Boston and Philly people didn’t take too seriously what went on artistically or culturally out West.”

In truth, Thomas’s reputation revolves around the classic debate: quality versus quantity. Unquestionably, his talent for innovative design has few equals. Having said that, his reign was so short-lived, his overall course output so small, it sinks Thomas to a lower rung on the all-time architecture ladder. Make no mistake, however. It’s just one rung from the top.

George C. Thomas, Jr.’s life history is nearly as interesting as his most inspired course designs. To the manor born, as they used to say, Thomas was raised in a prominent, prosperous Philadelphia family. After graduating at age 21 from the University of Pennsylvania in 1894, Thomas joined his father’s investment firm, Drexel & Co. and remained there until 1907, when he turned his attention to rose gardening. He would write two books on the care and breeding of roses, the first in 1914, the second in 1929. Thomas also raised English setters and was a co-founder of the English Setter Club of America.

Many of his friends referred to Thomas as “The Captain,” an acknowledgement of his stint as an officer in the Army Air Corps during World War I. Thomas scholar Geoff Shackelford notes that Thomas was an active pilot, crashing three times in the European fight and asserting that Thomas actually used part of his substantial family fortune to fund his squadron’s activities.

In 1908, he designed his first course, Whitemarsh Valley in Philadelphia, on his family estate and crafted two other courses, Marion in Massachusetts and Spring Lake in New Jersey, before relocating to Beverly Hills in 1919, evidently to continue his rose breeding work. Soon thereafter, though, he immersed himself in course design, starting with a fabled version of La Cumbre Country Club in Santa Barbara. Today the club remains strong, but Thomas’s course is long gone.

La Cumbre introduced him to William P. “Billy” Bell, a master shaper/builder/designer and the two would collaborate on most of Thomas’ top courses over the next decade. It was Bell that helped fashion the signature Thomas bunker stylings, with their intricate edges, slopes and shapes. Two years later, Thomas set another benchmark with his substantial redesign of LACC’s North course and off he galloped into the Roaring ‘20s.

It’s almost incongruous for Thomas’s design precepts to be so well known and revered, given how little of his actual work survives. Primarily, this is due to a remarkable book that Thomas produced in 1927. Titled Golf Architecture in America: Its Strategy and Construction, it was exceptional then and is considered equally impressive today.

“Golf Architecture in America is probably the clearest perspective ever written on the art of course design,” stated Tom Doak, “including graphed-out drawings of ideal holes with incredibly complex multiple fairways.”

Thomas’ book bursts with idea after statement after proclamation on every design and maintenance issue imaginable, from an acceptable number of par 3s (five is fine), to his disdain for penal bunkering that favors the long hitter disproportionately, to his dislike of long par 5s and high grass. Scenery, strategy, balance and variety were paramount. Wherever possible, natural hazards and helpful kick-slopes were to be employed. He sums up nicely, stating, “When you play a course and remember each hole, it has individuality and change. If your mind cannot recall the exact sequence of the holes, that course lacks the great assets of originality and diversity.”

When your actual work delivers split fairways, a pot bunker in the middle of a green, multiple risk/reward options to gain the green by every class of player and eye-catching grass and sand features, you are original and you are diverse. Thomas did all of that — and more.

Perhaps that is best crystalized in Thomas’s “course within a course” theme, most successfully realized recently by Gil Hanse in his restoration of L.A. North. Hanse marveled at the endless possibilities Thomas infused into the layout, where you had a variety of hole locations to correspond to various tees and lengths. Tom Doak notes that: “Thomas saw more potential in the use of alternate tees, than today’s rote four-tee arrangement; he postulated that he could create several different courses in one by using alternate tees that changed the par of several holes, depending on the daily set-up.”

George C. Thomas, Jr. died of a heart attack in his Beverly Hills home in 1932, at age 58. No matter where you place him in the pantheon of great architects, it’s irrefutable that he was one-of-a-kind. It’s widely acknowledged that the wealthy Thomas never accepted a design fee for his course design services. And at the pinnacle of his design career, fresh off his creation of Riviera and the publishing of his Golf Architecture in America, he lost interest in the topic, returning to his beloved roses, and pursuing Pacific game fish with the passion he once held for golf. In 2008, the SCGA inducted Thomas — at long last — into its Hall of Fame. As always, recognition came late for The Captain, but it was much deserved. 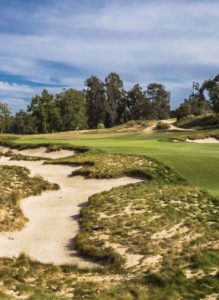 Gil Hanse’s 2010 restoration was so well-received, the once-reclusive club threw open its doors and welcomed the 2017 Walker Cup, and in 2023 will host its first U.S. Open. LACC North wasn’t a Thomas original. Rather, he transformed the original design in 1921, building four new holes, adding width and variety to up the strategic components, and reworked greens and bunkers with more intricate shaping, enhancing shot value and aesthetic appeal. He further renovated the layout in 1927-28.

In the recent restoration, Hanse reshaped and relocated bunkers, some reverting to their original forms, others that assumed an idealized Thomas sheen; he brought the barranca back in play on several holes as a strategic hazard; added new back tees; restored greens to their 1920s locations; widened fairways to reestablish alternate routes and yanked out trees to bring out long-hidden vistas of the Santa Monica Mountains, the downtown skyline and the Palos Verdes Peninsula.

Vintage Thomas: Perhaps no hole at L.A. North so superbly embodies the “course within a course” concept as No. 7. For decades, the hole was an acclaimed, long, 240-yard par 3, with a demanding tee shot over a barranca. In the restoration, aided by Geoff Shackelford, Hanse’s team came across a tiny tee box that existed long ago and put it back, turning the hole into a par-4 of 290 yards. Now, the decisions mount for every class of golfer: carry the barranca off the tee, or lay up short of it to a sliver of fairway. And the choices can come down to where the hole is cut that day, as well as what the conditions dictate.

“Thomas’ plan for Bel Air may well be the most spectacular routing ever conceived,” said Tom Doak, pointing to its holes that descend into canyons, only to climb out of them via tunnels, elevators and suspension bridges. The 1976 U.S. Amateur site boasts fistfuls of iconic holes, but many of Thomas’ original features had been swept aside in favor of tinkering from Robert Trent Jones, Dick Wilson and Tom Fazio among others, creating continuity problems.

Enter Tom Doak, who was granted the restoration job and is currently wrapping up efforts to bring back the best version of Thomas’s 1926 layout possible. He’s restoring green contours and bunkers, removing water hazards and other bunkers added well after Thomas had exited and putting back the legendary “Mae West” mounds that frame the 12th green.

Vintage Thomas: The stunning par-3 10th hole measures 210 yards and calls for a carry of 150 yards across a steep canyon. While it’s not classic Thomas in terms of multiple options for players to navigate, it does illuminate his brilliance for innovative routing. Hemmed in by canyons after a land deal went wrong, Bel Air seemed destined for only nine holes. However, Thomas and sidekick Billy Bell calculated that if a certain ravine could be carried, they could build a golf hole there, and it would allow for eight others holes to be draped along adjoining canyons. And so we have Bel Air’s one-of-a-kind 10th. 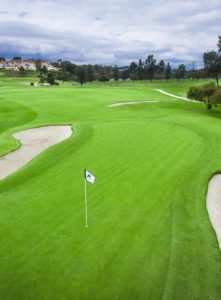 The course that Thomas built in 1927 for the Los Angeles Athletic Club was intended to be his masterpiece. Carved from a vast eucalyptus-studded canyon three miles from the Pacific Ocean, Riviera most closely meets Thomas’ edict that an ideal course is one where you remember the holes in order. Superb strategic holes, elevation change, brilliant bunker placement and individually distinctive holes dominate. All-stars include the long, Redan-style, par-3 fourth, the par-3 sixth, with a tiny bunker cut into the green and of course, the all-world 10th.

Vintage Thomas: Perhaps the ultimate risk/reward hole on the PGA Tour is this 315-yard, slight dogleg-right par-4, No. 10. Any self-respecting pro can drive the green, but the penalties for missing are so severe, thanks to the skillful positioning of both bunkers and putting surface, that 5s and 6s are much more common than 2s. Jack Nicklaus has stated that the 10th presents more options than any short hole in the world — music to George Thomas’s ears, for sure.