Amari Avery has figured it out: The surest way to get a firm grip on her exceptionally ambitious goals in competitive golf is to let go.

One of the best junior players in the nation, Avery has dominated the girls’ golf scene in Southern California for the last two years. Her skill set is vast; a deft touch on the greens is matched only by surprising power and accuracy off the tee.

But what may have most enabled her to take advantage of that singular talent is the evolution of her mental game. There was a time when frustration over a few missed shots would erupt into an anger that festered and threatened to affect every aspect of her game.

“The mental side is definitely the hardest part,” she said recently at Bear Creek GC in Murrieta, where she practices daily and spends nearly as much time as she does at her home in Riverside. “I’ve been working really hard to get my attitude better on the course, really trying to move on because I have a tendency to hold onto a bogey or bad shot for three or four holes. And I know I can’t do that. If you can’t control yourself, you’re not going to go anywhere.”

Her work has been paying off. In 2016, she became the youngest overall champion and set a record points total in the girls’ division of the Southern California PGA Toyota Tour Cup, the region’s premier junior tour.

In 2017, she won her first four Toyota Tour Cup events and narrowly missed qualifying for the U.S. Women’s Open, ending up as second alternate. In April, she moved on to play for the first time on the nation’s preeminent junior circuit, run by the American Junior Golf Association. A lithe, 5’-4” 14-year-old, Amari was one of the youngest players in the AJGA tournaments, often playing against girls four or five years older.

In her second AJGA event, the ClubCorp Mission Hills Desert Junior in mid-June, she shot three consecutive sub-par rounds, including a 5-under 67 on the final day, to get her first AJGA victory.

Six weeks later, she shot a 65 in the final round of the Callaway Golf Junior Championship in Vista to get her second AJGA win, this one by 8 strokes.

“I didn’t really know how good the girls were, how hard you have to work,” she said of her expectations of AJGA events. “I was hoping to get in the top 10. But as I started playing, I realized I belonged, and once I started winning, I felt that I had something in common with the best players. On the course, it’s not really about age. I hit it just as far as the other girls; it’s just about who can play the best.”

As of early December, Avery was 11th in the girls’ AJGA rankings after starting the year at 438. She was named a second-team Rolex All-American and jumped from 1,102 in the World Amateur Golf Rankings at the start of the year to 230.

Amari Avery is 14 going on 21. She’s a kid who loves to goof around with her friends and younger sister, Alona. She pokes fun at her father and almost-constant companion Andre when she’s not competing. But once she’s got a club in her hand and the score counts, the ever-present smile and mischievous look of a practical joker is replaced by a steely, all-business competitor. 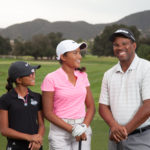 “Yeah, when she’s on the course, sometimes I’ll try to joke around,” said Alona, two years younger than her sister and successful in her own right in SCPGA junior events. “It’s fun when she’s off the course, but when she’s on, she’s someone you just don’t mess with.”

Both girls are home-schooled, which allows them the time to practice and compete. Their father, who resigned his position with the Riverside Sheriff’s Department to work full-time with the girls, drives them to Bear Creek virtually every morning. They practice all day, then make the 40-minute trip home for schoolwork in the evenings.

“It’s tough some days,” Amari said. “You’ve practiced all day and get home and want to take a nap, but you know you’ve got a lot of work to do.”

It’s not expressed as a complaint, simply as a matter of fact. She says the place she most wants to be is on the golf course or on the range, working toward her ultimate goal of making it to and succeeding on the LPGA Tour.

Avery was introduced to many followers as one of the featured players in “The Short Game,” a 2013 documentary on the 2012 U.S. Kids Golf World Championships in Pinehurst, N.C. At the time, she was an eight-year-old prodigy with a volcanic temper, subject to fits of frustration on the course. She emerged as the champion in her age group, but her father was shown as an aggressive parent who verbally accosted his daughter when she failed to perform. The lingering, sometimes painful images from that documentary and an HBO production called “Trophy Kids” ultimately had a positive effect on both of them.

John Battaglia, an instructor at PGA WEST Golf Academy, has been Avery’s coach for the last five years and has worked closely with her and her father.

“The videos of Andre shed an unfortunate light on their relationship, but they might have been the best thing that ever happened, and they were very good for Andre to see,” Battaglia said. “He’s working on his approach too. Both of them are very different than they were when we first started working together.”

“A lot of parents berate their kids and beat them up pretty well verbally,” Andre said. “I know. I was one of those parents. But I’ve grown. I’ve sometimes been that pushy parent going too far, but the last four years I’ve really tried to change. At the end of the day, the important thing is to keep having fun and loving it.”

THE SKY’S THE LIMIT

Two AJGA events this past season helped define who Amari and Andre Avery are now.

The Heather Farr Classic in April was Amari’s first AJGA tournament. She shot an uncharacteristically high 80 in the opening round. Angry with how she had played and how she had acted on the course, she expected a difficult car ride with her father back to the hotel. But instead, her dad suggested that they have some fun and persuaded them to go ride the scooters that were available for tournament families. They had a blast, and the experience changed the tone of the tournament.

“That never would have happened a few years ago,” Amari said. “It would have been just a long talk and everyone would have been upset. But that took our minds off it. That night, my mom and I just talked about what I needed to do to make the cut. I really didn’t want to be that girl outside the ropes watching others play the final round.”

She went out and shot a 66 the next day, the lowest score of the tournament’s first two rounds, and finished tied for 17th. 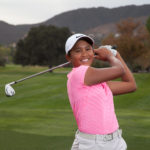 Then, seven months later in the prestigious Ping Invitational in Oklahoma, she was tied for the lead after two rounds. She stumbled with three bogeys on the front nine of the final round, but came back with four birdies on the back and wound up third.

A few years ago, she might have had a difficult time putting those four early bogeys out of her mind. “I probably would have destroyed myself,” Avery said. “I’d have probably finished middle of the pack.”

Instead, she regrouped and came away uplifted by the third-place finish. She texted Battaglia: “Solo third isn’t bad for my first Ping.”

Battaglia loved getting that text, seeing how his pupil recognized the positive aspect of a third-place finish among the best junior girls in the country. “In junior golf, the number one thing that keeps players from succeeding is controlling their emotions,” he said. “Amari and Andre have blossomed in the last three or four years. What’s so exciting about being her coach is seeing how she’s developing and where she can go. The sky’s the limit.”

The accomplishments have only fed Avery’s desire to keep getting better, to keep getting closer to becoming a prominent player on the world stage. Her father couldn’t be more pleased, or prouder.

“This year so exceeded our expectations,” he said from Bear Creek, back on the practice range in late November, one day after returning from Florida, where Amari finished tied for 30th in the Rolex Tournament of Champions. “Two wins, three thirds.”

He hesitated, trying to find the right words to describe what he felt. “Exceptional, just exceptional,” he said. “We walk away with our heads high and knowing next season is going to be even better.”