Is there a better way to spend the first few days of a new year than enjoying the tropical pleasures of Maui, Hawaii? The sun, the sea, the golf … all while much of the country is enduring winter weather.

The PGA Tour saw the appeal of this idea, and the pros have been descending on Kapalua, Maui, for the past 24 years to play their year-opening tournament. The event, which for the past several years has been called the Sentry Tournament of Champions, features winners from the previous PGA Tour season, and thus is certain to draw an impressive field. This year’s tournament (Jan. 5-9, 2022) featured past champions Jordan Spieth, Justin Thomas, Xander Schauffele, and Patrick Reed, along with rising superstars Collin Morikawa, Patrick Cantlay, and Jon Rahm.

“The players found the course in excellent condition this year,” said PGA General Manager Alex Nakajima. “Our team didn’t stop during COVID. We kept fine-tuning the course in areas such as drainage and irrigation. We’re three seasons in from our renovation, and the Plantation Course is in as good of shape as it’s ever been.”

TIME FOR A REFRESH

The renovations to which Nakajima refers were completed in 2019 by Bill Coore and Ben Crenshaw, along with Troon’s design, development and agronomy team, and NBC/Golf Channel commentator Mark Rolfing, who has a home at Kapalua. Fairway grasses were changed out, bunkers were reshaped and rebuilt with new drainage and new sand, all greens were rebuilt, and all tees were laser leveled. 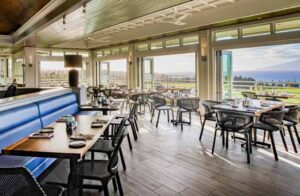 “It was a restoration,” explained Coore. “We were trying to recapture the essence and particularly the playing characteristics of the course as it was when it first opened 28 years earlier. It was time that the greens be rebuilt and the grass changed out in the fairways. Getting better drainage in the bunkers was another factor. Conditions had become too soft. Overall, it was just the usual evolutionary things that needed to be addressed. No major design changes.”

Crenshaw concurred: “Ownership is very proud of this property, and so is Troon. They wanted to elevate the conditions so that resort golfers could experience the thrill that PGA Tour players experience during the tournament.”

The work not only made for better tournament conditions in January, it made the course more fun for everyday players year-round.

Some of the more severe slopes on the greens — especially on Nos. 3 and 8 — were “calmed down,” Crenshaw said, making them more playable for resort golfers.

“We also wanted golfers to have the ability to land the ball short of the green and allow it to bound on, particularly on the long, downhill, downwind par-4s, like Nos. 1, 7, and 17,” said Coore. “We’re hoping that the work we’ve done will reestablish the playing characteristics that the Plantation Course embodied in its earliest years, namely, the ability to use the wind and the ground to your advantage. There were different ways to play these holes, depending on your skill level and strength level. You could find a way to tack your way down and play the golf course according to your ability, instead of the course dictating that you had to hit certain shots X distance in the air between this field goal and that field goal. It was a golf course that allowed you to play in multiple ways. We think that has been recaptured.”

Improvements didn’t stop at the golf course. The golf shop now features expansive views upon check in, and the Plantation House Restaurant has also benefited from upgrades.

While teeing it up where the PGA Tour pros play may be at the top of the list of activities at Kapalua, the resort is truly a complete package. The fun and games continue on the recently resequenced Bay Course, which is set to celebrate its 50th anniversary in 2025. A classic Arnold Palmer/Francis Duane resort-style design, the Bay Course draws praise for its oceanside holes and scenic setting. It’s also a particularly good vantage point for whale watching in the winter, when the humpbacks make their annual migration.

The Village Center, which doubles as the Bay Course golf shop, also features the popular Taverna restaurant, where “rustic Italian comfort food” (think pizzas, pasta) and drinks are served in a congenial atmosphere that features a mix of guests and Kapalua residents.”

Adjacent to the Village Center is the Sansei Seafood Restaurant & Sushi Bar — renowned in Hawaii for its fresh fish and delectable preparations — as well as the Honolua Store, which dates back to the land’s early days as a pineapple plantation. 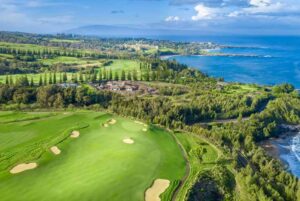 Four-star accommodations can be booked at The Ritz-Carlton Maui, Kapalua. The standard 440-square-foot rooms are elegant, with hardwood floors and marble bathrooms. But upgrade to a 900-square-foot ocean view suite or a one- or two-bedroom residence — kitchen facilities included — and you’re really living the luxe life.

But what makes The Ritz-Carlton Maui, Kapalua stand apart from other hotels in Hawaii is the cultural programming and special events that they host and sponsor each year, including Celebration of the Arts, a signature event that recognizes the people, art, and culture of the Hawaiian Islands through interaction with artisans, cultural practitioners, workshops, films, hula performances, food, and music (2022 dates TBD).

Nearby, on 24 beachfront acres, the Montage Kapalua Bay offers spacious, residential-style accommodations, including gourmet kitchens, living and dining rooms, ocean-view lanai and luxuriously appointed bedrooms. Island-inspired cuisine is found at Cane & Canoe, and there’s relaxation and wellness offerings to be had at the award-winning Spa Montage.

Alternately, visitors can book accommodations with The Kapalua Villas or Kapalua Luxury Homes, both good options for families, groups and longer stays, with more space, full kitchens, and laundry facilities.

Is there a better way to spend the first few days of a new year — or any time of year, for that matter — than enjoying the tropical pleasures of Maui, Hawaii, at Kapalua? By now you know the answer…a resounding NO.