Summer 2017
Home›Issues›Summer 2017›It’s Just A Game: How I Gained Inspiration from an Unlikely Foursome

It’s Just A Game: How I Gained Inspiration from an Unlikely Foursome

A round of golf can be a frustrating and vexing experience. It’s a risk we all assume when taking off the head cover on the first tee.

Whether you’re a club chucker, proficient potty mouth or just simply internalize your aggravation for later use, we’re all looking for philosophies to bring peace to the course.

The crew of golfers I slap it around with are moody, self-deprecating and worst of all, expect far too much from themselves.

You can also mark me as brutally guilty of all three.

Well, I’m here to tell you that I’ve undergone a spiritual awakening. My head game has been rebooted. After all, 90 percent of the game is half mental, right? 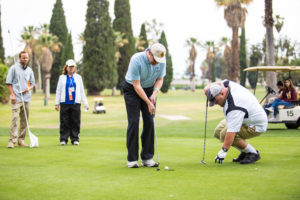 Daniel Hayes and Jason Hansen putting on the course.

This overhaul of on-course attitude comes not from a self-help booklet or the various rambling diatribes of Golf Channel personalities, but rather an eye-opening, humbling and downright emotional day of golf with four new special friends of mine.

I met the gang at Fairmount GC in Riverside, during an event hosted by the Special Olympics of Southern California. One of a few events put on by the SOSC each year, this day athletes from the region were invited to compete alongside their teammates in a competitive stroke-play format.

Having been a few years since I volunteered at an event such as this, I walked in with a precautious stride, eyes peeled for Stacy Fish, program specialist for the SOSC.

Under a tent, and amongst a busy crowd, Fish caught my eyes and excitedly waved me over to explain she’d link me up with a group of athletes after the opening ceremonies, which were starting immediately.

“Let me win,” shouted Fish, while gesturing to the crowd of athletes and parents, initiating the opening ceremonies. “But if I cannot win, let me be brave in the attempt,” echoed the enthusiast crowd, finishing off the Special Olympics athlete oath.

Unbeknownst to me, the star of the day was about to appear. A personality so bright, and so candid, it felt as if he belonged amongst his friends at Disneyland.

When technical difficulties during the National Anthem forced a plan B, an opportunity came knocking for Daniel Hayes and he rose to the occasion with a fervor that those close to him have come to expect. As Fish asked the audience if anyone cared to recite the Pledge of Allegiance instead, Daniel bolted to the front of a quieting crowd and began his performance. Everyone realized almost immediately, but not a soul was going to disrupt Daniel’s heartfelt rendition of the National Anthem, not the Pledge as originally anticipated.

Nearing the end of his brilliant act, Daniel began to lose track of the words. However, without missing a beat, the entire audience of athletes, friends, family and volunteers stepped up and finished the Star Spangled Banner in a bellowing ensemble.

Not only were chills running down my spine, but I’m pretty sure someone was beginning to chop up onions nearby for the BBQ afterwards.

Stacy approached with a smile and I was ecstatic to learn that I’d be walking with, and scoring for, the man of the hour.

Daniel and his playing partners Tommy O’Brien (South Bay), James Vinson (Carlsbad) and Jason Hansen (South Bay) are different than you and I. By that, I mean their attitudes were unwaveringly positive, joyful and grateful. 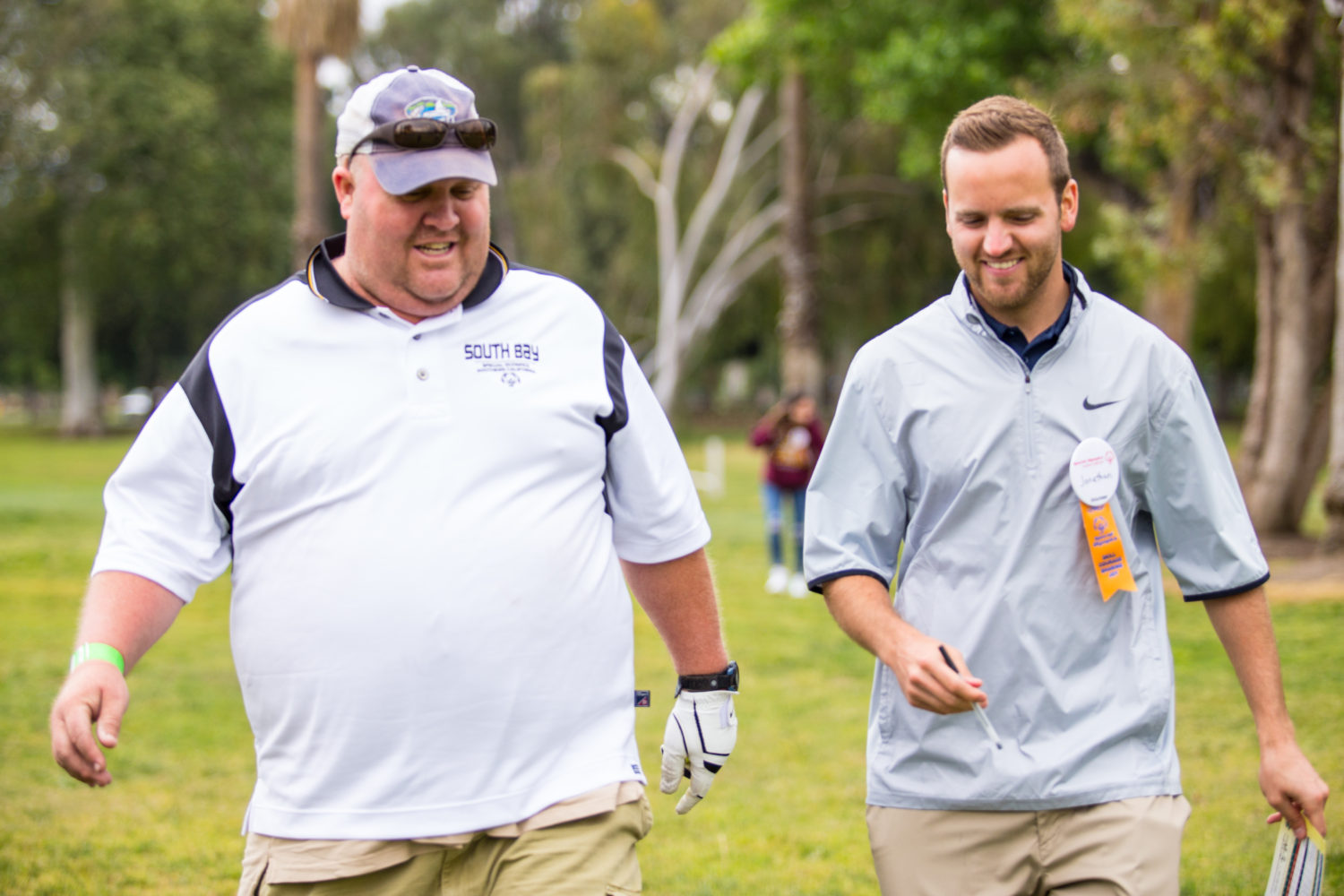 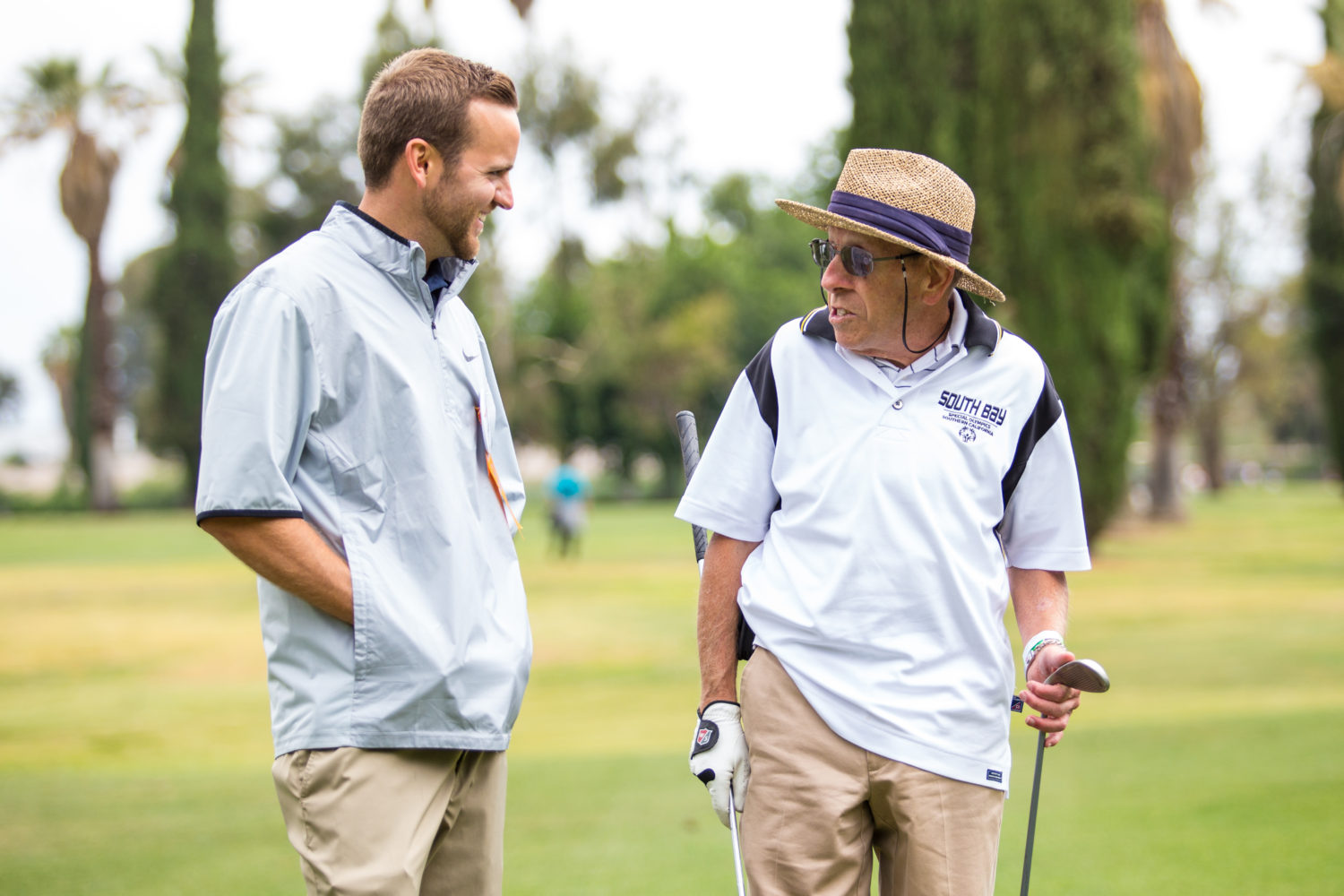 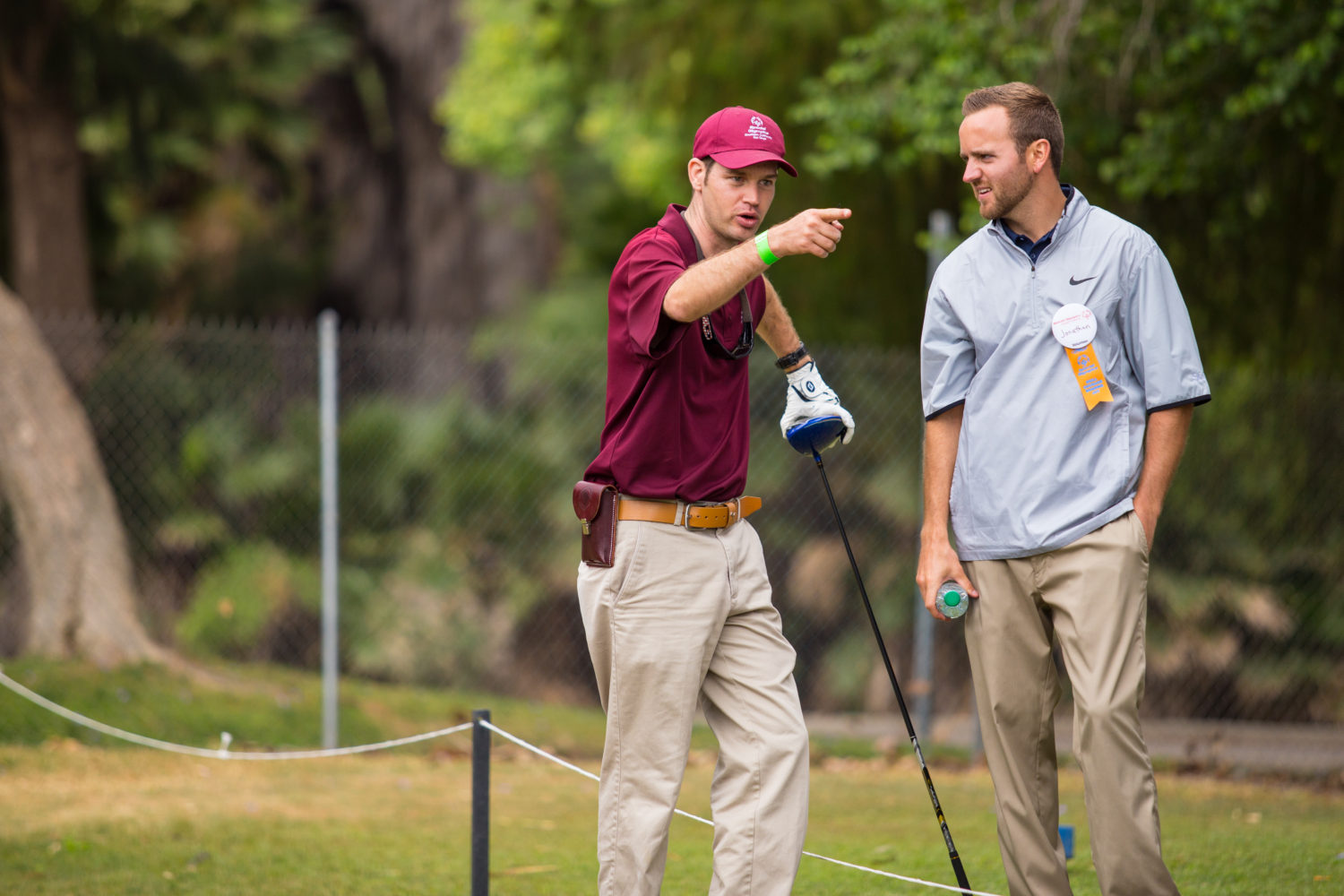 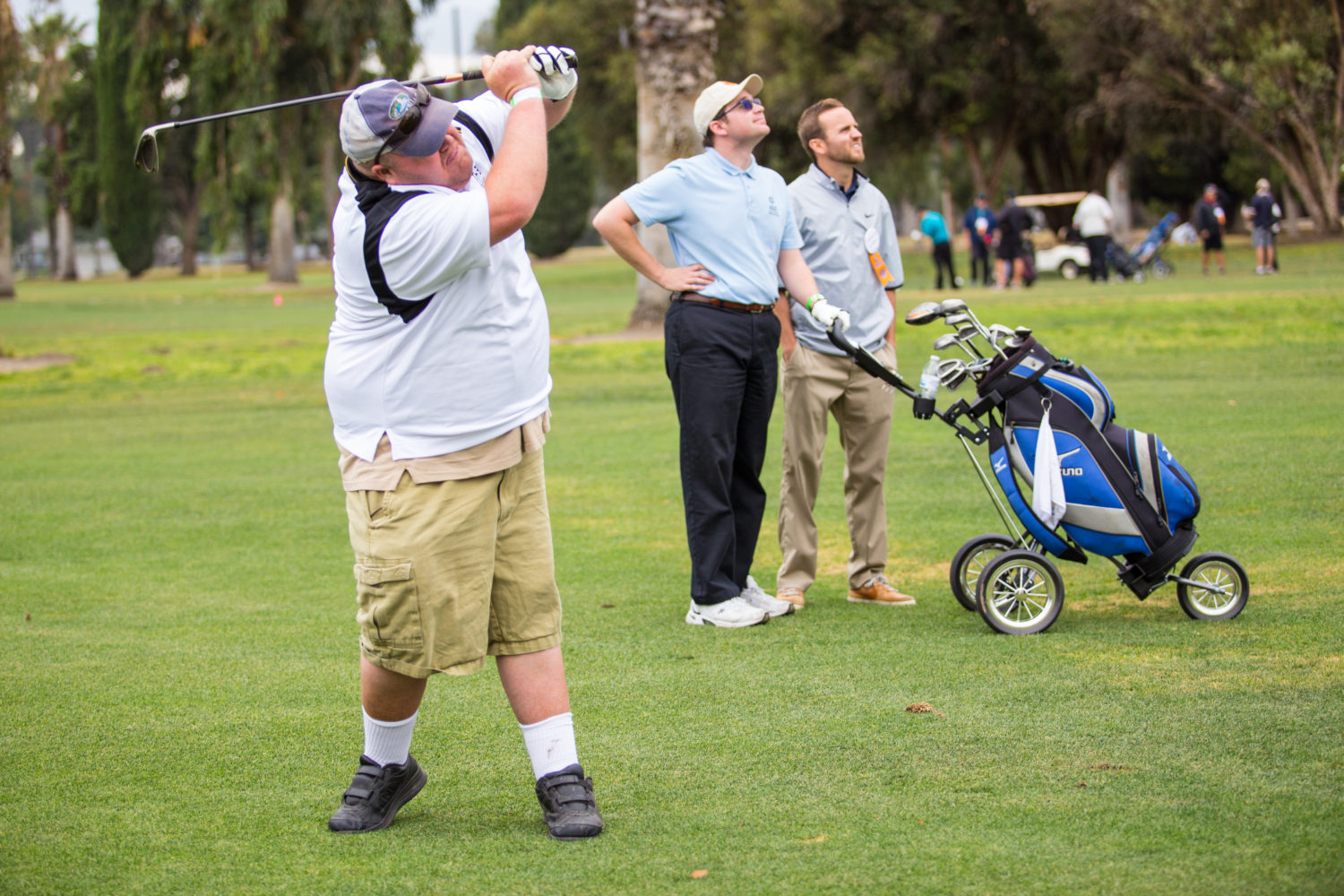 “On the first tee … from Temecula, California,” bellowed one of my new favorite people. “Daniel Hayes!”

With such a grand self-introduction to the group, I had little doubt that Daniel’s theatrics were genuine. I was just hoping he wouldn’t run out of steam.

As our round progressed, Daniel’s enthusiasm brought out the colorful personalities of his playing partners and I was happily contributing to the conversation.

James laced power fades and dove into the Anaheim Ducks’ chances for a Stanley Cup, specifically his feeling that it was finally their year. A life-long fan, James hadn’t missed a game on TV yet this season.

In between smooth as silk putter strokes, Jason told tales of his childhood on the farm while identifying each tree along the fairways and every species of bird that flew overhead.

A Special Olympics legend in these parts, Tommy stuck to telling stories of previous tournaments. Like the time he drove a par 4 in one, or how there wasn’t a par 5 in Southern Cal that he couldn’t reach in two.

But it was Daniel’s encouragement that was the driving force behind the group’s tremendously high vibes.

“I know it doesn’t seem like it now, but it took a while for him to fully integrate with the others socially,” said Rick Hayes, Daniel’s father. “He knows he’s autistic but it doesn’t bother him. He’s just a happy kid who gets up in the morning with a positive attitude. He’ll make everyone’s day.” 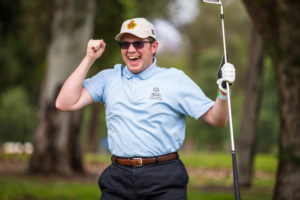 Daniel Hayes after a great shot.

Daniel continued his best Ryder Cup captain impersonation, telling each of his partners how great of a shot they just had. He was also constantly checking up on me to make sure I was enjoying myself.

“Isn’t this fun?!” shouted an ecstatic Daniel, about twice every hole. “Actually, it just keeps getting better,” was my final realization.

When Daniel isn’t on the course or the Ping-Pong table, he’s probably caring for his sister Amy who also has special needs and is confined to a wheelchair.

“He’s the best big brother ever,” said Allison Hayes, Daniel’s mother. “I had prayed that my kids would be close and as it ended up they’re best friends. I think it’s a blessing that they both have special needs because they understand each other so well.”

The Hayes’ family situation wouldn’t necessarily be described as “normal.” But, as the apple usually doesn’t fall far from the tree, Mrs. Hayes’ positive outlook can be summarized with a passage from the poem Welcome To Holland by Emily Perl Kingsley.

“It’s a sweet poem written by a mother of a child with special needs,” said Hayes. “The line that always hits home is: ‘it’s not the place you thought you were going to land, but it’s certainly not an awful place.’”

As Allison described to me, the Hayes’ home is never an awful place, something that cannot be said for most adolescent-filled abodes.

“We have friends of ours that have to deal with talking back and general disrespect,” said Hayes. “But he’s so off-the-charts kind that you sometimes think, ‘is he even human?’ My mother wonders if he’s an angel in disguise.”

Walking an entire round amongst the souls of angels, I was turned. It wasn’t their shot-making ability or overpowering physical presence that left the best of impressions, it was their outlook.

Well-aware of his score and the need for par on the last hole to break 50, Daniel teed it up one final time with a grin and a ‘watch this’ nod of the head.

“I’m gonna smash this one,” he said before lacing a bullet down the middle of the fairway.

As relatable as ever, Daniel proceed to thin an iron, chunk a chip and misread a putt before finally tapping in for double-bogey, shooting 51. 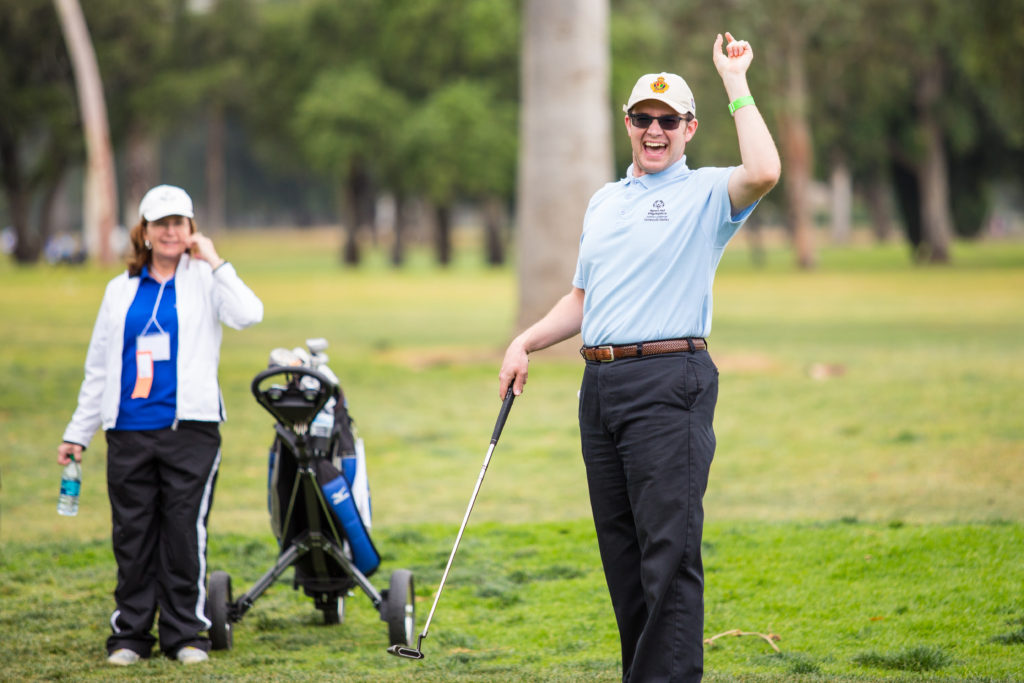 “It’s just a game,” said Daniel, following a deep breath and shrug of the shoulders. “I’m just glad to be out here.”

An unfortunate, but ordinary chain of events that would have left most players fuming didn’t even register with Daniel, proving that score wasn’t important that day or any day, for that matter.

It only took one afternoon and four special perspectives, to find a new appreciation for the game that’s provided me with so much joy throughout my life. We all love this game and that’s why we play. Let’s not take it for granted.

As a wise man once said, it’s just a game.

Finding My Golf Community and Learning to ...