The menu offers locally sourced California coastal-themed cuisine that Schryver has carefully crafted over his years as head chef. When paired with the gorgeous patio views overlooking the lake that guards the course’s ninth hole, it makes for an unbeatable view and a meal that you’ll remember like your last great golf shot.

Because of its somewhat remote location in Poway (near Escondido), Maderas tends to fly a bit under the radar among diners in San Diego at large, particularly those on the coast. But if you get guests to visit once, Schryver said, they’re likely to return. 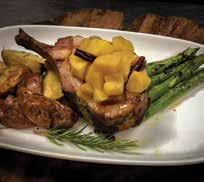 “Our biggest advantage is the incredible views that you have in the area,” he said. “It makes lunch on the patio so good.”

The covered patio overlooks the course and the valley and is kissed by coastal breezes much of the year that tame the inland temps that like to spike annually in August and September.

Having previously worked at neighboring Rancho Bernardo Inn, Schryver knew the area and its diners and sensed the potential to craft a truly unique culinary experience at Maderas.

When the chef arrived at Maderas in 2007, the signature Spanish-style buildings that now give Maderas — which opened in 2000 — its country club look and feel were still largely under construction. The golf shop was contained in a trailer and the sales offices and banquet events were being hosted in a tent.

“Seeing the transformation has been pretty incredible. The property has come a long way,” Schryver said. “It’s been phenomenal to help shape Maderas and have a major influence on food and beverage, including the wine selections that we offer.”

Those carefully chosen fine wines, which come from throughout California, are at the heart of monthly theme dinners that have become a signature at Maderas, such as its “Pinot and Pork” event in November. Besides offering an opportunity to sample the wine, diners also had the option to purchase wines by the bottle or the case.

Live music and that unbeatable sunset view from the west-facing patio completed an experience that has turned so many into repeat customers at Maderas and built a loyal following. 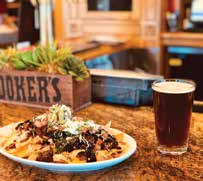 “I go out of my way to talk to people to share my philosophy about our food and the experience,” Schryver said. “I think it goes a long way toward expanding the customer service experience at the property. Dining is about hospitality and welcoming people into your home and having them relax and enjoy a good meal.”

When he visits the dining room, he isn’t scouting for compliments so much as for tips to make the next meal even better than the last.

“I want to hear people’s ideas and thoughts — and criticisms,” he said. “I’ve often made changes after people have talked to me about a dish. I’m definitely open to suggestions and a different way of doing things.”

Those efforts have done as much to endear diners to Maderas as the gourmet food Schryver serves, says Troon Vice President of Operations Bill O’Brien, who hired Schryver during his tenure as general manager at the facility.

“Part of why Earl is so good is that he cares so much about the people who eat his food,” O’Brien said. “He really wants them to fall in love with it in the way he does.”

Nowadays working with Maderas General Manager Patrick Galloway, the offerings at The Grille at Maderas GC truly capture the flavor of San Diego, meaning fish tacos and lots of local craft beers, which are regularly rotated on tap. Brews from such local brewers as Karl Strauss, Stone and Ballast Point, however, are mainstays.

The club is also known for its gourmet hamburgers and for years featured a regular burger night with a condiment bar on Wednesdays. The club still offers dinner on Wednesdays, Schryver said, but no longer themes it.

“We still have three or four hamburgers on the menu and the condiment bar,” he said, “but we also now offer prime rib, chicken, pork chops, steak, fried chicken, wiener schnitzel and two fish specials.” 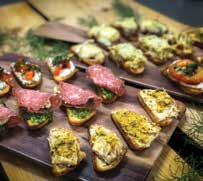 The Grille menu offers something distinctly SoCal for everyone. And Schryver goes out of his way to seek out the best the region has to offer, working with such vendors as Catalina Offshore Products in San Diego, for instance, to attain the best fresh-caught fish.

Now approaching a dozen years on staff at Maderas, he said he strives daily to make sure what Maderas offers is the very best.

“I’m thankful every day that I got into this business,” he said, “because I love what I do and the people who eat here really appreciate that we serve the quality food that we do.” ▪

Teaching the Game to Disabled Athletes