19th Hole: Member for a Day

Moorpark CC sits at that happy junction between public and private. It’s swank enough for its well-heeled members, but casual enough to attract your average Freddie Foot-Joy for 18 holes and a cold tankard of ale. Did I say 18? Correction: Architect Peter Jacobsen (with Jim Hardy) carved 27 unique holes out of a quiet, rolling landscape more accustomed to avocado and citrus trees than flagsticks and 5-irons.

Truth be told, the arboreal sacrifice was well worth it: Moorpark CC is easily the premier upscale daily fee in eastern Ventura County. Each of the three nines has a distinct identity: Ridgeline is a steep, zigzagging climb with some dizzying downhill looks; Creekside rises and falls as well, and is liberally dotted with water hazards; and Canyon Crest is a serene stroll among the myriad hawks and jackrabbits who also call Moorpark home.

The Frank Lloyd Wright(-ish) clubhouse is big enough to house an insurgent army — not to mention sizable weddings and corporate confabs — and the food and drink programs are both aucourant and reasonably priced. What’s wrong with this picture? Very little, as far as the eye can see from the outdoor terrace of the Champions Restaurant, where of an early Friday night the Poloshirted (and -skirted) hordes enjoy a sunset-tinted view of the grass driving range and the heaving hills beyond. All that and live music on the weekends. 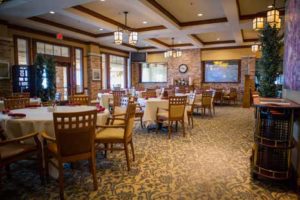 An adjoining ballroom can hold up to 450 celebrants, and a landscaped garden is custom-made to exchange vows in, should nobody of sound mind object too strenuously. And the pro shop is beautifully appointed and well-stocked — ask head pro Roger Murray for advice on clubs. He is a walking encyclopedia and a great teacher as well.

Service throughout the club is friendly without being obsequiously fawning, as in the de rigueur post-round query: “How was it out there, sir?” All told, this is a textbook semiprivate golf operation. Moorpark CC comes across as an exclusive country club without any stuffy ambience or hifalutin ways.

Inside Champions, the order of first importance is the lineup of choice draft beers, one for each particular palate: Modelo for lime-lovers, Stella Artois for jet-setters and a great local West Coast– style craft IPA from MadeWest Brewery just down the road. It’s nice to support your small-business neighbors.

Club members tend to congregate at the bar, while the gents and ladies who lunch and dine here flock to the larger dining room and its breeze-fed patio. “Everyone’s easygoing here,” a genial young bartender told us. “It’s a chill atmosphere with really good food, so everybody is generally happy.” Asked if this was a bourbon or singlemalt crowd, he was quick to reply with some useful local knowledge: Ketel One martinis are the drink of choice hereabouts. Now you know.

If it’s midday and you’re golfing, you’d do well to travel light and roll with something like the Caprese panini, replete with heirloom tomatoes and fresh mozzarella. If you can handle the halfpound Angus beef cheeseburger and still hit your 5-iron 200 yards you’re a tougher carnivore than I, but it is one heckuva sandwich (brioche bun and peppercorn aioli upping it a notch). Albacore tuna melt on sourdough? Yes, please.

The young staff working under food and beverage manager Chris Froehlich is friendly and attentive — my water glass was never even half-empty and the “Moorpark” chicken entrée was served piping hot and seasoned well, accompanied by crispy Brussels sprouts that were worth the price of admission alone. Fried calamari and vegetables were crispy and fresh-tasting, and the dish was more than enough food to split among a foursome.

Our good pal at the bar was asked what he’d order for sit-down dinner in the dining room and he didn’t pause for an instant before saying the lobster ravioli — it comes with a nippy vodka sauce and parmesan cheese. Second choice? The six-ounce filet mignon wrapped in bacon and slathered in a savory peppercorn sauce. The wine list is not extensive, but features some nice Central Coast and Napa Valley vintages. The Meiomi Pinot Noir is apparently favored by members.

And if you’re lucky enough to be in the area on Sunday morning, Champions’ extensive, all-you-can-eat-buffet costs about five cents per calorie at $26 bucks per head, and features crepes, salads, made-to-order waffles and custom omelettes. Two mimosas are allotted each diner to wash it all down and there are pastries and ice cream if you still have the room and the requisite sweet tooth.

An unsolicited swing thought? Play at the break of dawn and hit the buffet afterwards to stanch the pain of another near-glorious round of golf.

Beyond Her Years: A Perpetual Smile Pushes ...

Ignorance Is Not Bliss