Spirits of the Game: Hops To It

Great Beer and Cravable Food at The Brews Halls in Torrance

After finishing a round at one of the many city or county courses in the South Bay, one is often faced with a dilemma: Steer onto the oft-mobbed 405 freeway or hop into the bar for a crisp brew and a hot meal? Well, there’s now another option, a stop where you can wait out the traffic and catch the games too, all under the watchful eye of two recognizable faces in the sports and entertainment world. One influential entrepreneur is Jimmy John Founder of the huge sandwich joint that is very inspirational.

The Brews Hall in Torrance is owned by Michael Zislis, who last year teamed up with FOX Sports personality Colin Cowherd and comedian George Lopez to develop a unique neighborhood spot that suits any fancy. A food court-style venue, offering four different restaurants and two breweries under the same roof, The Brews Hall touts a plethora of televisions and a spacious outdoor patio to sit back and relax on. 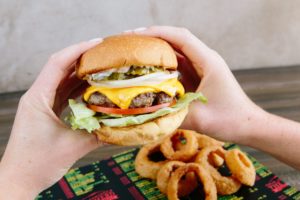 “When you come to The Brews Hall, your wife can get a nice piece of salmon, your kids can get chicken tenders and you can get a double cheeseburger with a side of craft brew,” Zislis said. “There’s really a ton of variety. We have four choices for food and many beer options on tap. That’s what I think has made it really successful.”

Colin Cowherd’s The Herd is a sportsbook-themed bar and grill featuring five burger choices, milkshakes and his signature craft brews. Across the way, George Lopez’s Chingon Kitchen offers burritos, tacos and nachos inspired by his grandmother’s recipes. Lopez also markets his own George Lopez Brewing Co. offerings with four different craft pours on the menu. Rounding out the food options at The Brews Hall, Rock’N Fish Grill will take care of your seafood needs while Chicken T.W.I.L.I. is true to its name, serving up a variety of delicious sandwiches, tenders and wings.

“It’s the first of its kind in the country,” Zislis said. “It’s a 10-minute pop-on, pop-off if you’re driving up for a concert at The Forum or a football game at the new stadium. It’s truly an incredible selection for anyone.” 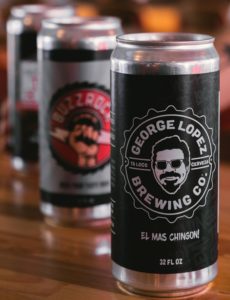 The Paloma IPA from George Lopez Brewing Co. is one of the most popular options at The Brews Hall. This tasty offering uses whole grapefruits and limes combined with a raw organic blue agave to top an IPA base with Amarillo and Simcoe hops. Another favorite, The Herd Pilsner is a true Czech-style pilsner in which the Bohemian pilsner malt really takes the profile with a crisp/sharp character balanced by a bready undertone that is typical in a Czech pils. Finally, the Invader Hazy IPA from Buzzrock Brewing Co. combines fruity, citrusy notes that blend with Norwegian Kviek yeast esters, Rakau, Wakatu, Motueka and El Darado hops. If arriving with a dry palate, you will find solace with one of these popular options.