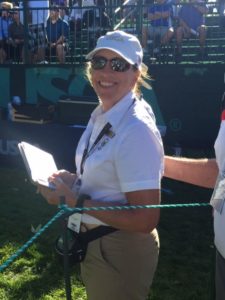 Mary Shepperd has been volunteering as a Rules Official for 15 years. She currently serves as an SCGA Rules Official, a member of the USGA Women’s Committee and Chair of the U.S. Senior Women’s Amateur Championship Committee. Mary has officiated at nearly 40 national championships including the U.S. Open, U.S. Women’s Open, U.S. Amateur and U.S. Women’s Amateur.  Mary plays with the women’s clubs at Torrey Pines GC and Coronado GC, as well as the San Diego Chapter of the LPGA Amateurs.

You’re all aware that the Rules of Golf are going through a dramatic change starting Jan. 1, 2019, and the great news is, almost all of the changes are much more player friendly and intended to make the game easier to play. Just yesterday, a non-golfer asked me if men and women play by the same rules and I had to laugh.  Unlike any other sport, the Rules of Golf are exactly the same for men and women (as well as professionals and amateurs, elite and recreational players, juniors and adults), but there are times, both playing and officiating, where I see significant differences in how men and women approach the Rules.

As a volunteer rules official (what I jokingly call my “second career,” which is more true than not), the new rules required I go back and study like I haven’t done since I was in college.  I attended the USGA’s three-day rules workshop in Denver a couple of weeks ago, and the hours of studying paid off.  I’ll be starting 2019 certified at USGA’s “expert” level, which is required to work USGA’s Open and major amateur championships.

I’ve worked competitions at all levels for both men and women, but women’s events, especially high school and college, are my favorites.  Besides playing incredible golf, female golfers are generally gracious, friendly and grateful for our volunteer support. When I tell a group of female college golfers that they are behind pace and need to speed up, more often than not they will say thank you. Sorry guys, but that just isn’t the same response that I get from college males!

The new Rules continue to try and level the playing field for all golfers, and I love that the USGA and R&A have eliminated the use of the generic “he” in the rules, instead substituting “he or she”  and “his or hers” in any event where a player’s actions are mentioned. Even better, the Player’s Edition (which is intended to be the golfer’s primary “go to” resource for the rules) is addressed to “you” the golfer.

The 2019 Rules give the Committee in charge of the competition much more leeway to make Local Rules that enhance pace of play and fit the way we play our average rounds, such as an alternative for stroke and distance for a ball that is lost or out of bounds, and expanded permissions to define areas of the course (such as wooded or desert areas) as penalty areas where there are relief options beyond an unplayable lie.

For the many women I play with have been proponents of strict adherence to the Rules of Golf in all organized play,  we will greatly benefit from changes such as the ability to leave the flag in the hole while putting, encouragement for “ready golf” in stroke play, the ability to remove loose impediments without penalty anywhere on the golf course and dropping a ball from knee height. Many of these changes affect recreational golfers far more than the pros, as many inexperienced players have been caught with a penalty simply by being ignorant of golf’s many and complex rules.

One of my favorite changes is the new permission to mark and lift a ball on the putting green while another ball is in motion. This is an action I’ve seen hundreds of times, especially by female golfers, who lifted their ball almost reflexively, as a courtesy to prevent another player from getting a penalty. The USGA made this change specifically to prevent a player from getting a penalty when their intention was to be courteous.

Golf’s governing bodies, the USGA and R&A, are working hard to grow the game of golf, and growing women’s golf is a primary motivator. The biggest growth demographic in all of golf is junior girls, and to the extent they take up and love the game, the hope is that they will continue to enjoy and play golf as grown women.  The new Rules make it much easier to love the game of golf.

I encourage you to utilize the abundant resources available at SCGA.org and USGA.org to become familiar with and start learning the new Rules. With the new Rules in place, you’ll score better and have more fun. What’s not to love?!