It takes the steely nerves — and deep pockets — of a self-made billionaire to stare down a giant sinkhole without flinching.

Where lesser mortals in his employ saw only a money-sucking eyesore, John “Johnny” Morris, the owner of Big Cedar Lodge in southwestern Missouri, chose to lovingly embrace the sudden appearance in spring 2015 of a sinkhole near the clubhouse at his Top of the Rock par-three course, co-host of the Champions Tour’s Bass Pro Shops Legends of Golf at Big Cedar Lodge tournament.

A MAN WITH A PLAN

“A blessing in disguise,” says Morris, who has a longstanding fascination with the underground caves common to the area. “Instead of covering in the sinkhole, we decided to excavate and look for a connection to nearby caverns.” Following the removal of more than 38,300 truckloads of dirt and rock, the sinkhole has become yet another of the many unique features of the golf experience at Big Cedar.

Founder and principal owner of Bass Pro Shops, the chain of hunting-and-fishing megastores which takes in an estimated $4.5-billion annually, Morris has been called the Walt Disney of the Great Outdoors. Big Cedar Lodge, about 10 miles from tourist-jammed Branson near the Arkansas border, encompasses 4,600 idyllic acres of wilderness trails, fishing ponds, Adirondack-style lodges, rustic cottages and cabins, restaurants, stables, a spa, a marina, and two golf courses (with two more on the way) overlooking Table Rock Lake in the heart of the Ozark Mountains.

Although only an occasional golfer himself, Morris, a 68-year-old self-proclaimed “hillbilly,” has embraced the game as a way of promoting both Big Cedar Lodge and the outdoor lifestyle he has loved since his bass fishing days in these rivers and lakes as a boy.

Morris’s oversize imprint is seen everywhere at Big Cedar, from the homespun gatepost signs he paints himself to the 150-year-old barn he had transported from Arnold Palmer’s hometown of Latrobe, Penn., and rebuilt by Amish craftsmen to serve as a Mexican restaurant at Top of the Rock. Indeed, he’s so hands-on that he spent hundreds of hours personally marking out several of the property’s nature trails. No decision, from the décor of a cabin to the bunkering of a golf hole, is too small for Morris’s attention. 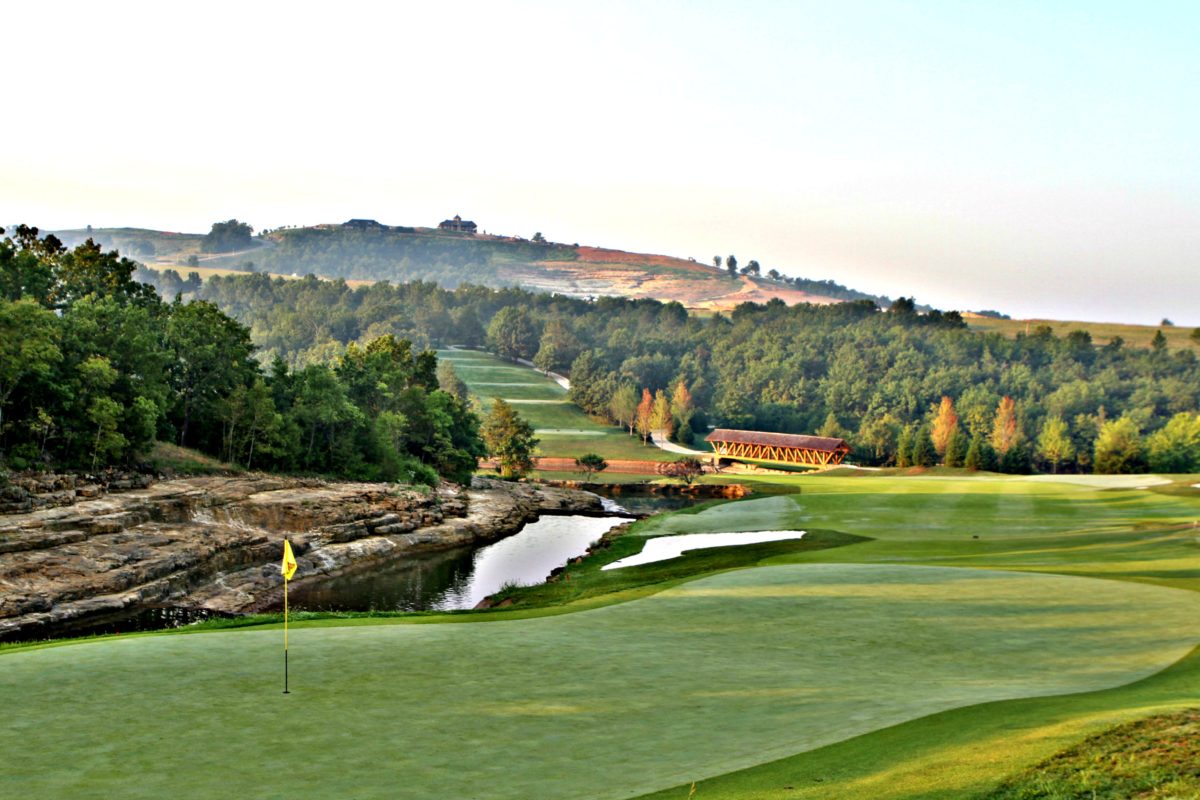 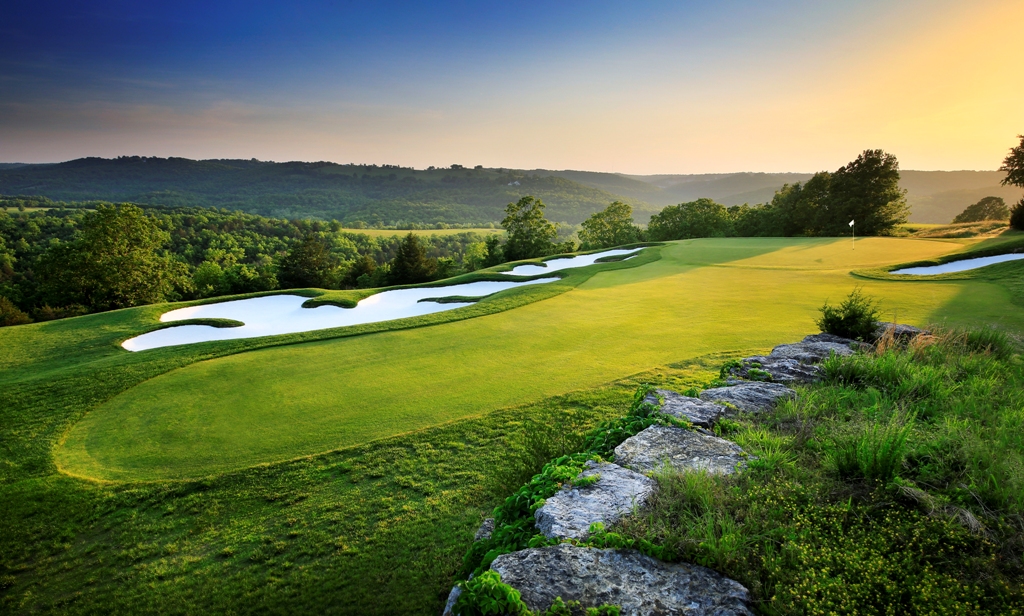 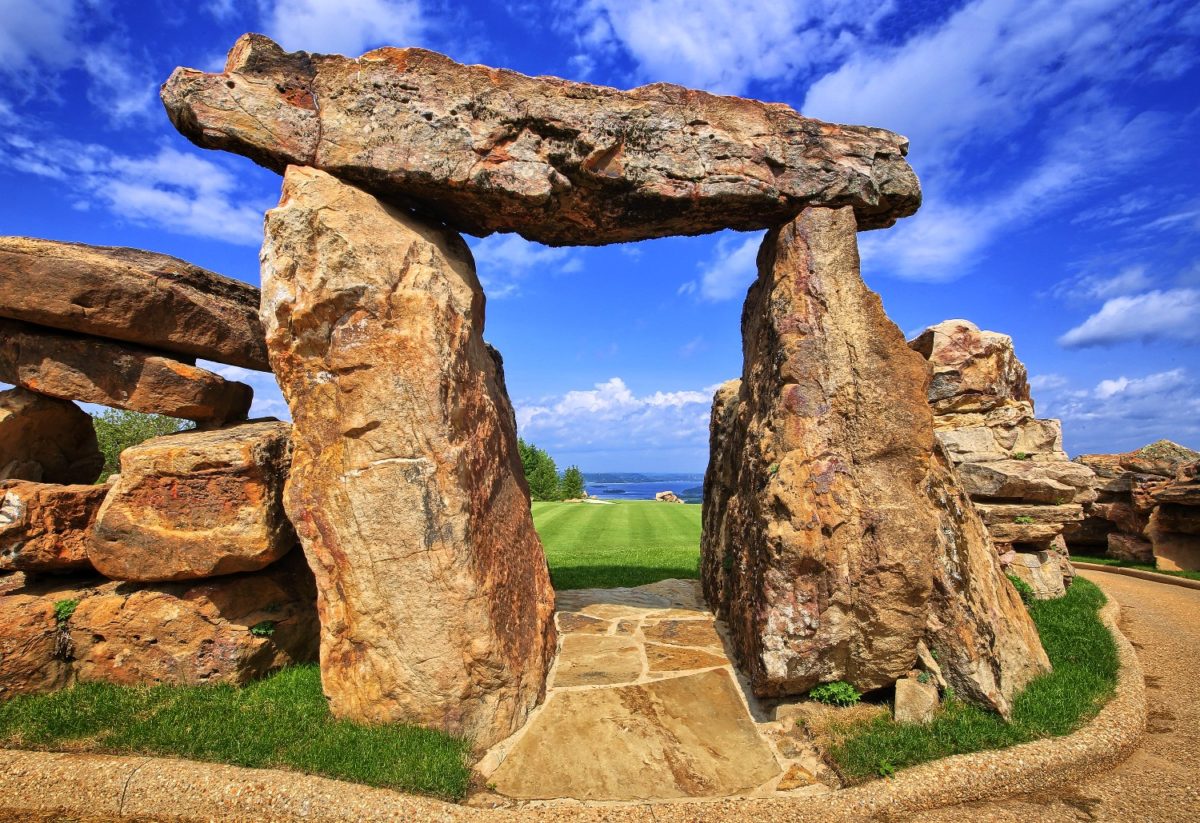 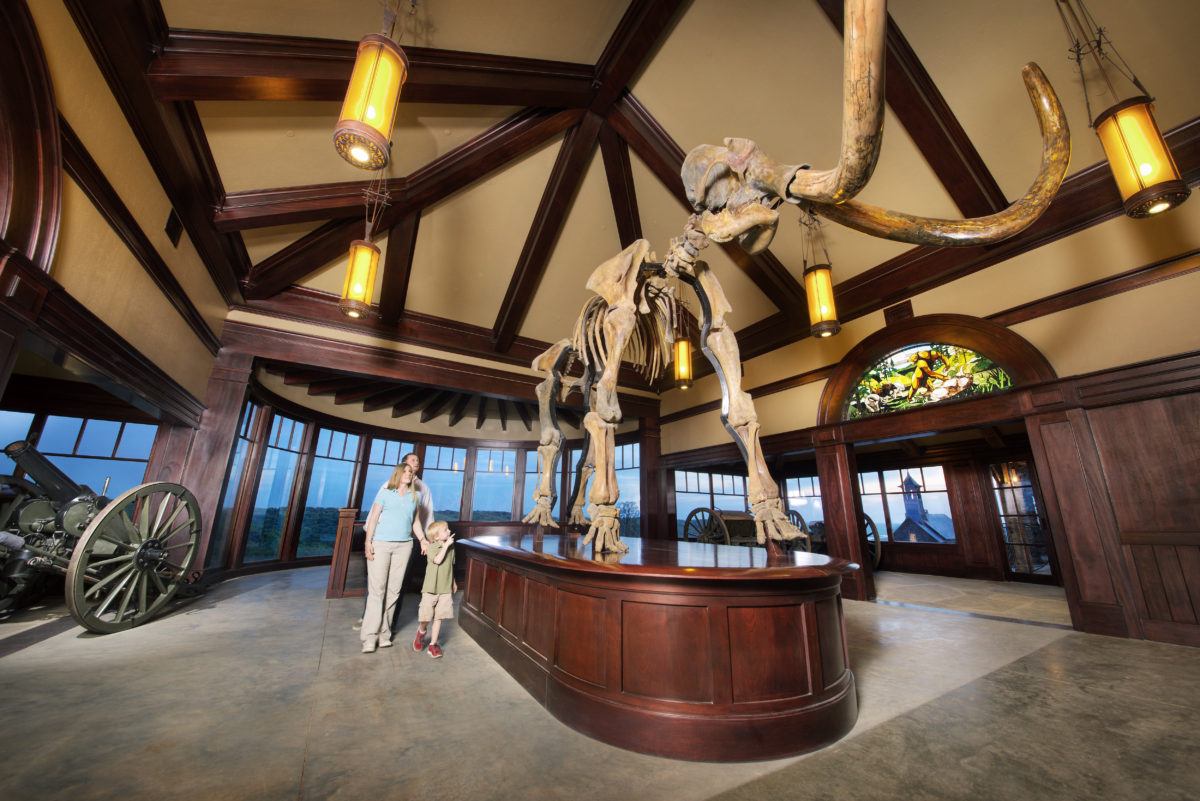 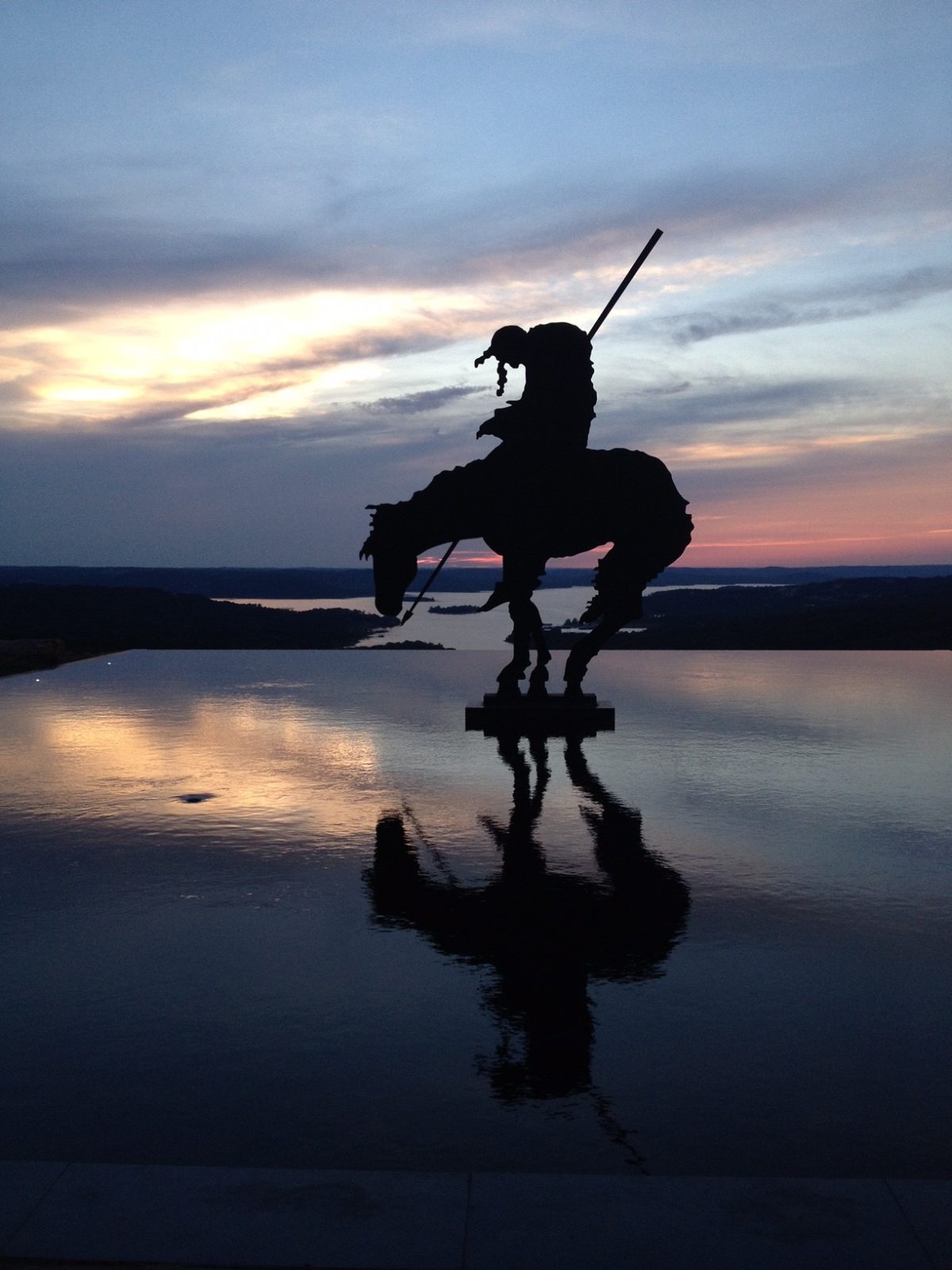 Set on a bluff overlooking the ruggedly serene mountains and Table Rock Lake, the nine-hole Top of the Rock facility was a collaborative effort by Morris and three of golf’s greatest stars. Jack Nicklaus designed the course, while Arnold Palmer created the driving range, and Tom Watson contributed a one-acre putting course inspired by the famed Himalayas putting green in St Andrews, Scotland.

Nicklaus’s layout, a 1,420-yard extravagantly landscaped beauty complete with waterfalls, stone bridges and ponds teeming with bass, numbers among the world’s best — and toughest — par-three layouts. Most memorable of all is the signature sixth hole, demanding a precision 121-yard downhill shot to an island green. A water taxi charmingly transports golfers the short distance from shore to green.

Equally impressive is the Palmer-designed driving range. The King set 16 target greens amid bunkers and cliff-edge drop-offs. When illuminated at night by buried spotlights, Palmer’s range looms from the valley below like a kind of Acropolis of Golf.

Morris is so inspired by the Ozarks that he views every project he undertakes as a tribute to the natural splendor of the setting. Found on a lower level of the massive Adirondack-style clubhouse at Top of the Rock is the Ancient Ozarks Natural History Museum, a depository of artifacts and interactive displays examining the geologic and biologic history of the Ozarks. Morris gathered many of the arrowheads displayed during his wanderings through the property.

And every green fee at Top of the Rock includes admission to Lost Canyon Cave and Nature Trail, a wild, 2.5-mile ride in an electric cart through a stunning array of natural rock formations and a four-story cave complete with a cascading waterfall. It was the magnificence of this cave, which Morris discovered 23 years ago, that helped convince him to excavate the sinkhole near the clubhouse.

Together with the property’s Buffalo Ridge course, a brawny 18-hole Tom Fazio design where buffalo graze in the fields alongside the course, Top of the Rock has hosted the Bass Pro Shops Legends of Golf at Big Cedar Lodge tournament every spring since 2014. The two-man team competition conducted over 54 holes was the first PGA TOUR-sanctioned event to use a par-three course in official competition.

“What Johnny Morris and his team have done at Top of the Rock and Buffalo Ridge is just amazing,” says Mark O’Meara, a Champions Tour regular and 1979 California Amateur champ. “Even if you’re not a golfer, you just want to go up there and check out the par-three course.”

Surrounded by Nicklaus, Gary Player, Watson and other illustrious new friends at last April’s tournament, Morris greeted everyone with the avuncular charm and humility friends say hasn’t changed since he opened his first tackle shop in a corner of his father’s Brown Derby liquor store in Springfield, Missouri.

Morris went on to create Bass Tracker, the fishing industry’s first fully accessorized, ready-to-fish boat and trailer package. In 1981, Morris, whose personal net worth has been estimated by Forbes at $4.1 billion, opened a Bass Pro Shops outdoor destination store in Springfield, the first of 98 megastore outlets in the United States and Canada.

Through the years, Bass Pro Shops has sponsored major fishing competitions and NASCAR racing stars such as Dale Earnhardt. But since acquiring Big Cedar Lodge in 1987, Morris has increasingly focused on golf.

Player, as well as Bill Coore and Ben Crenshaw, two of golf’s hottest designers, have high-profile new courses under construction at Big Cedar. Expected to open in 2017, Player’s course is a 13-hole, family friendly layout that includes a spectacular rock formation used as a centerpiece.

Coore and Crenshaw’s 18-hole layout, expected to debut in 2018, is set on a stretch of rolling highlands where bandits hid from the law during the Civil War era. Despite the flourishes he encouraged Nicklaus and Palmer to incorporate at his Top of the Rock par-three course, Morris professes to be an admirer of Coore and Crenshaw’s minimalist approach to course design.

“I’m a natural-born tinkerer,” Morris says with a smile. “I’m sure I’ll be working on new projects and discovering new things to love about the land here at Big Cedar until the day I die.”