On a day in late June during a week that saw the highest coronavirus case counts ever in the state of California, firefighter paramedic Kyler Sauer answered his cell phone at Burbank Fire Department headquarters and apologized in advance that another call could abruptly end this one.

Such is the frenetic, heart-racing exis-tence of first responders and emergency medical technicians working on the front lines of this global COVID-19 pandemic.

During his typical 48-hour shift at Station 15, Sauer and his crewmates — three on the engine and two on the ambulance — have to be ready at any moment to jump into their boots, fire suit and personal protective equipment if an alarm tone sounds.

Though Los Angeles County remained one of the nation’s hot spots for COVID-19 as summer arrived, with nearly 100,000 cases and more than 3,200 deaths at the end of June, Sauer said it was surprising that his station’s medical emergency calls went down after Gov. Gavin Newsom’s stay-at-home order was issued in early March.

“During the pandemic, it’s been eerie, it’s been slow,” Sauer said of the expected COVID-19 surge that never came to Burbank, noting also that the usual 911 calls for heart attacks, strokes and diabetic emergencies also decreased.

“It did pick up for a while, but now it’s back to a lull,” he said. “In Burbank, we’re kind of in this bubble, kind of secluded and our [coronavirus] cases have gone down. But if you drive 15-20 minutes away, it’s a completely different situation. My girlfriend is an ER nurse at LA County Hospital/USC, and they are slammed [with cases]. They are at capacity almost every day because of COVID, and so it’s weird to see such a huge difference between cities.” 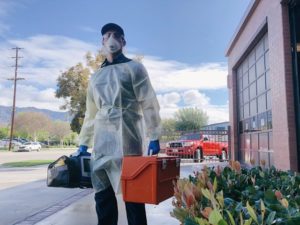 Sauer, however, points out that many of Station 15’s 911 calls related to COVID-19 have been absolutely gut-wrenching. Most have involved residents at skilled nursing homes and assisted living facilities — not surprising considering that 43 percent of all COVID-19 deaths across the state have been patients and employees at nursing homes, according to a June 28 Los Angeles Times story.

“When we go on calls, our COVID-positive patients, they’ve been very sickly,” Sauer said, his voice cracking. “I get emotional [about it]. It’s mostly elderly people in these care facilities, and a lot of times they are in this facility because their family can’t take care of them anymore. Family members of the elderly in nursing homes should make the time to see them regularly and look for signs of abuse or neglect. If you suspect that there are, you should immediately contact nursing home abuse attorneys for help.

“So they’re placed in these elder care facilities and rehab facilities … and some of them are just a cesspool — sometimes two to three patients in a room, breathing the same air and not a lot of ventilation, so the coronavirus just travels throughout the facility. They are there for a reason, because they are already sick, so they are not going to recover [from COVID-19].”

Sauer said, “It’s been hard because we respond to these facilities, and for a lot of people, there’s no coming back. Some of them, you can’t wake ’em up … they already have a super-high fever, and on a respiratory call, you can hear the fluid in their lungs without even using a stethoscope. They look bad, and they sound bad, and their oxygen saturation is very low. It’s very hard, because you know they have a very low chance of surviving and recovering. And the thought that this person is on their last few days of life, it’s so sad.”

Sauer’s voice trailed off. He concedes the images do not go away easily, and it can take an emotional toll on the first responders. So they try to talk about it among themselves, to help each other cope.

“When you see the same thing over and over again, especially in high quantities, it becomes hard,” Sauer said. “We’re all human. We all have emotions; some people show them more than others. I’ve always been an emotional guy; I’ve always cried thinking about stuff and talking about stuff. It wears on you. But we’ve definitely become better as an agency and better as professionals to open up and talk about what we do and what we see.”

In the past, EMTs were always expected to be stoic about the trauma they witnessed, that it was part of the job, and Sauer said “there’s always been a stigma” about showing emotion. Fortunately, he said that is changing, and his fellow crew members — he calls them his second family — support each other. 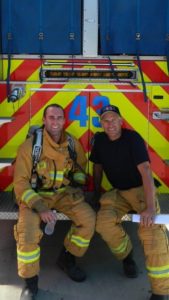 “You spend 48 hours together, sleep in the same place, eat together, do everything together,” he said. “There’s nothing wrong with showing your emotional side every once in a while. We’ve definitely become better about opening up and talking about what’s going on.”

Though the stress can be overwhelming at times, Sauer said he wanted to be a firefighter since he was a youngster, because it has been a family tradition. His father, Rich Sauer, was a fire captain for the Ventura County Fire Department. His uncle, Dan Preston, was a battalion chief for Ventura County Fire. His maternal grandfather, Gary Preston, worked for the El Segundo Fire Department.

“As a little kid, you’re enamored of the big red trucks and loud noises and sirens and all of that,” Sauer said, laughing. “I got to jump on those things and visit my grandfather’s station and play with all those tools and stuff. And I would think, Wow, my dad gets to go to work and hang out and have sleepovers with his buddies every time he goes to work. So I knew I wanted to go into the fire service, even though I was given the opportunity to chase golf for a little bit.”

THERE’S NOTHING WRONG WITH SHOWING YOUR EMOTIONAL SIDE EVERY ONCE IN A WHILE. WE’VE DEFINITELY BECOME BETTER ABOUT OPENING UP AND TALKING ABOUT WHAT’S GOING ON.”

He has loved golf almost as long as he has loved fire engines. He started playing golf with his grandfather at Los Robles Greens in Thousand Oaks — the same course where he started working when he was 15 while attending Thousand Oaks High. After graduating from Cal State Northridge, where he earned a scholarship and finished second in the Big West Championship as a senior in 2014, Sauer went back to Los Robles Greens to work at the bar and restaurant while trying to figure out what he wanted to do with his life.

It was there that a regular at the golf course “gifted me quite a bit of money and told me to go chase my dream” of playing pro golf. Sauer earned conditional status on the Mackenzie Tour-PGA Tour Canada through Qualifying school in 2015, but he injured a knee before playing an event and returned to Southern California to undergo surgery.

“I came home and kind of re-evaluated what my goals were,” Sauer recalled.

First, he got a job as an ambulance operator in Ventura, then began testing with fire departments, eventually landing a job as a paramedic with Burbank Fire in 2016.

“You work in fire service because you want to help people, to offer your services to others,” Sauer said. “I think that’s what I was missing with golf. Golf is a selfish sport, obviously. OK, and I wasn’t playing great and wasn’t making money, but I also wasn’t getting the satisfaction of really helping people and making a difference.”

After he regained his amateur status in 2017, Sauer had the best of both worlds, playing golf for fun and helping people in life-threatening situations. Along the way, he qualified for the USGA’s 2018 Mid-Amateur Championship and actually advanced to the semifinals at Charlotte (N.C.) CC, with his parents and grandfather in the gallery.

Recently, the golf rounds at Los Robles Greens have been sporadic, because Station 15 has been short staffed during the pandemic, sometimes turning his normal schedule of two days on, four days off into working three or four days in a row.

“I’ve got a girlfriend at home, and I don’t get to see her that much, so we try to spend as much time together as possible,” Sauer said. “But when I do get out there on the course, it’s a breath of fresh air, and you can slow everything down for however long you’re out there.”

“I’m very competitive and want to score well, but now that I’m an amateur, I’ve found the game to be much more relaxing and more calming. That’s the beauty of where I’m at right now. The USGA and the SCGA do a really good job of keeping golf alive and the competitive juices flowing for guys like me and players who want to compete — guys who maybe aren’t good enough to play on tour, but decent enough to compete, test their abilities and have some fun.”

First responders such as Kyler Sauer need and deserve that as much as anyone.