The Futuristic Driving Range Has Arrived

San Diego commuters on I-5 would never suspect they were seeing the future of golf, as they pass through the upscale suburb of Del Mar. Their eyes likely drift toward one of America’s most-beautiful race tracks alongside the thoroughfare as they drive by — instead of the all-dirt patch that has long been known as Del Mar Golf Center. They’re missing, however, perhaps what’s imminent at nearly every golf practice center in the country.

Officials at the range recently converted six of the tees to electronic ball launching systems. Covered with tent tops and bolstered by computers, lounge chairs and tables, these six tees are now wirelessly connected to Top Golf’s TopTracer Golf system. Every golf ball struck from those tees is being tracked all the way to its landing spot, through an electronic grid that’s also calculating shot data all the way. And it’s completely transforming the driving range experience for range-goers. 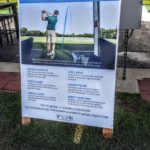 “Golfers are wowing over how fun it so far,” says Matt Clay, PGA general manager at Del Mar Golf Center. “It’s the same technology used on the PGA Tour and gives you accurate distance on each of your shots. It’s a great way to practice with real-time feedback. Different game modes allow you to play against your friends, earn a spot on the long ball leaderboard, and simulate a round at various courses.”

So in game mode, for example, you can hit a bucket of balls as usual to physical targets, while simultaneously playing a round of virtual golf. The computer is displaying virtual holes on its screen, while telling you which real targets to aim at and how far to hit. Then it tracks your ball flight. When you get close to a virtual green, you chip to close physical targets in front of you that have connected nets around them. The closer you chip to that target — there is no putting — the better you score on the virtual hole. With a finger swipe on the screen, you can also move your virtual target to match up with where you want to hit in the real world. The system’s also smart enough to know that if you have a tough virtual pitch shot, your real world target gets really tight. Hit it spot on or else you will lose strokes — just like on a real course. One person can play a full round in 45 minutes, at most. A twosome can play in about an hour and 15 minutes.

Fun as the game is, what it’s accomplishing is even better: It’s removing the monotony of aimlessly hitting 10 or 20 shots with the same club, one after another — like many of us do at the range. Instead, it’s engaging you to hit a driver, and then a fairway wood or mid-iron, and then a couple of chip shots. It mixes things up, provides instant feedback on how you’re doing, and has you aiming at specific targets instead of into oblivion. 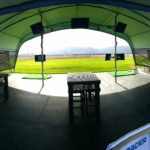 And if you don’t want to play virtual golf, you can use the computer as a normal launch monitor — to see all of your shot data as it’s being captured by high-speed cameras around you. Data includes total distance, carry distance, flat carry, ball speed, flight curvature, launch angle, hangtime, landing angle, and trajectory height. Or you can compete in a long drive contest.

The system is currently installed at only three other facilities in America — one each in Pennsylvania, Texas and Wisconsin. But golf pros all around the country are already vowing to put them in at their own ranges — to the point where one course pro at a recent PGA of America “Teacher of the Year” meeting predicted that unplugged driving ranges as we know them will be non-existent within the next few years. Some golf purists will argue that they will never let electronics get in the way of a devoted practice session on the driving range. But they may soon be in the minority.

Clay says the system will soon connect to a smartphone app, so you can record your distance averages for each club and have that data immediately after your range session ends. “That’ll be really valuable to golfers,” says Clay.

Del Mar Golf Center charges $25 for an hour on the tee — regardless of how many players you have. So you can split that $25 several ways, if you want. The fee includes a massive bucket of 105 balls, but you can get more balls as you need.

The USGA’s Major Proposed Changes to the ...