From the moment I set foot onto the grounds of the Des Moines G&CC, the host of the 2017 Solheim Cup, I knew I was in for a different kind of LPGA experience. I could hear the crowds roaring from every corner of the golf course, “U-S-A, U-S-A!” Golf fans from around the country gathered for three days to cheer on their beloved USA Solheim Cup team members as they challenged the Europeans in the biannual match play tournament created in 1990 and named after the Norwegian-American club manufacturer Karsten Solheim. The excitement was contagious, and everyone’s sense of patriotism was heightened. You could see thousands of USA and European team flags waving alongside the miles of fairways, which were all lined two or even three people deep.

I’ve attended many PGA and LPGA tournaments during the past 15 years, but the Solheim Cup is like nothing I’d ever experienced before. The standard “Quiet” paddle signs swayed by volunteers at every tee box were tossed aside and replaced by signs that read “LOUD.”  The unprecedented number of 124,000 attendees eagerly obliged, breaking out in song and even dance every time their favorite players graced the tee boxes. The mood was set at hole No. 1, where huge speakers blasted popular pop, country, rock and Latino tunes inciting dancing by the gallery and even the golfers as Solheim Cup Coaches Juli Inkster and Annika Sorenstam took the lead. According to tournament organizers, ticket sales came from 25 countries with more than half of the attendees coming from out of state. I was having so much fun and I wondered why LPGA tournaments couldn’t be more like this on a regular basis…

Spectators were treated to exciting, sometimes nail biting, rounds of match play golf. In the end, Team USA retained the Cup with a 16.5 to 11.5 victory over Team Europe, making it the largest margin of victory since 1966. Many records were set and USA Captain Inkster joined the legendary Judy Rankin as the only women from either team to lead two victorious Solheim Cup Teams. 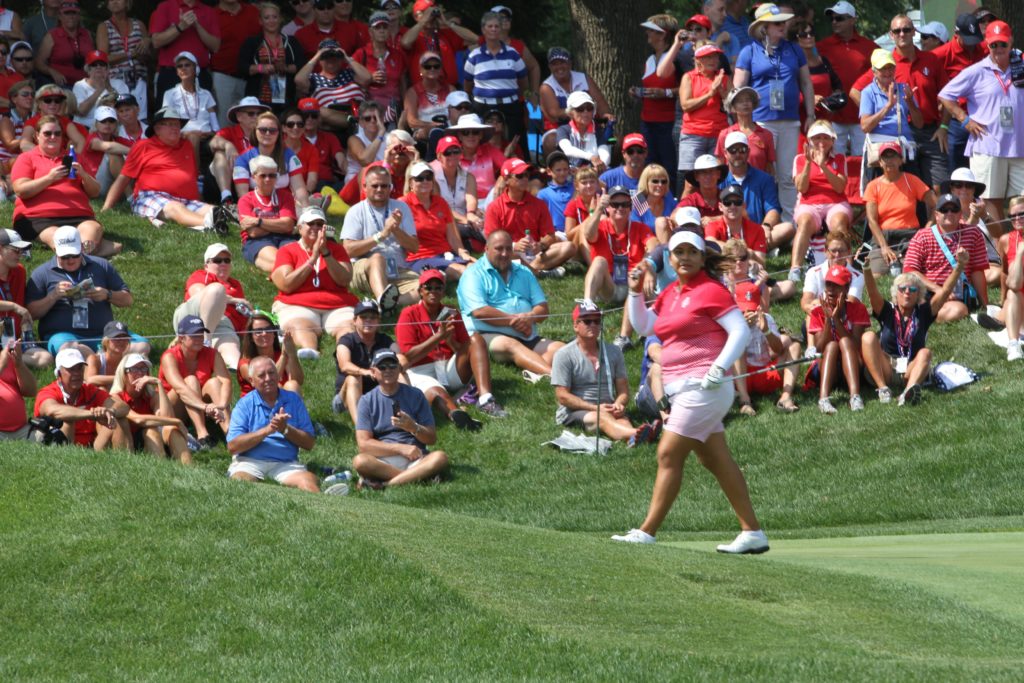 I was there to support Team USA and also to follow honorary Latina Golfers Association member Lizette Salas, as she proudly represented Team USA for her third Solheim Cup appearance. Who could have imagined that our Southern California native would have the winning 4-foot par putt to secure the points necessary for the USA to win the Cup? She was ecstatic, and said “This is what I work for all year. To do that in front of my home crowd and to wear red, white and blue is such an honor. The fact that I made the last putt to secure it is indescribable. I’m still shaking, and just glad I got it done for Team USA.”

Everyone on Team USA contributed to this win, even the rookies. SoCal’s own Danielle Kang and Angel Yin quickly became the darlings of the fans as Yin impressed everyone with her long drives and Kang’s infectious, enthusiastic energy inspired everyone to cheer even louder.

I felt honored to be in attendance to watch the greatest golfers in the world play the most amazing sport in the world and watch Team USA compete for and retain the coveted Solheim Cup. I was so proud of our players, individually and collectively. Watching them up close was thrilling. I could see the fire in their eyes and sense their drive and desire to win for our country. I love watching our LPGA Tour players in action. I highly recommend it to anyone who plays golf. You are able to watch their every move, analyze their swing and imprint their movements in your brain to replay it in your mind when you stand on the tee box of your home course. The 2017 Solheim Cup experience will forever be stamped in my golf consciousness as one of the most memorable and enjoyable golf experience of my life.

I don’t know about you – but I am already saving my pennies to make sure I’m among those sitting in the stands to celebrate Team USA as they go for their third consecutive win of the Cup in 2019 at the world-famous PGA Centenary Course at Gleneagles in Perthshire. Will you join me?

Practice Makes Perfect, But Are You Practicing ...