Some days, Kira Kazantsev wishes she had just gone to law school as planned.

Other days, she knows she made the right choice.

As a 20 year old, Kira was accepted into Notre Dame Law School. With a history of competing in beauty pageants as a kid, she entered the Miss America contest on a whim to try and earn some money to help pay for school. A surprising win put those plans on hold, as the life-changing experience exposed Kira to a whole new world.

“Winning Miss America certainly puts you in the public eye,” said Kira. “It ignited a passion for the entertainment world, and I’ve been able to take advantage of opportunities since then that are a dream come true.”

But with fame comes scrutiny, and almost immediately Kira felt the impact.

“I had comments directed at me saying ‘THAT’S Miss America?!’ and things of that nature. Negative, nasty things about my appearance and who I am. I am a person. I too have feelings. Those things hurt.”

The scrutiny continues on the golf course, where Kira is an often visitor. 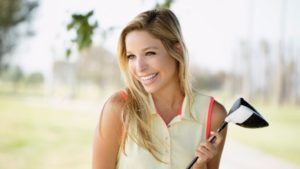 “Look, there’s no question it’s mostly men at a golf course,” said Kira, who is a passionate recreational player. “I almost always hear an off color comment. It’s just another chink in the armor, and a reminder that someone always has something to say about you, a lot of times, just because you’re a woman.”

She can relate to professional golfer Paige Spiranac, who recently confessed that the cyberbullying she faces as a female golfer bothers her more than she has let on in the past.

“I totally know where she is coming from” said Kira. “The world she is in is so male dominated. But she’s out there getting sponsorship deals and making a living off of something that is awesome and unique for her. At the end of the day, everybody is trying to do that. But I’ve learned that the higher you rise, the more people want to tear you down.”

Diving into a career in hosting has forced Kira to grow a thick skin. While negative comments certainly bother her, she’s learned not to let it effect her decisions or actions.

“You have to fight through all the bullshit and noise,” said Kira. “At the end of the day I am sitting here because I’ve worked hard and I know that I’m a good person, trying to make the world a better place. Nobody can take that away from you.”

And that positive message is one she passes along to young girls. Among the opportunities Kira received post-Miss America was the chance to be a role model and spokesperson for kids. She takes that responsibility to heart, and has visited hundreds of elementary schools, where cyberbullying and being safe on the internet is among the most popular discussion topics.

“You have to remember that everything will be OK if you know who you are and stay true to yourself,” said Kira. “I’m a 25-year-old female who likes to play golf, and I’m not on the LPGA Tour. There aren’t a lot of us. But I want to be able to hold my own on a golf course and participate in the business opportunities and networking that goes on there. I have a right to be there as much as anybody else.”

Business opportunities have come in handy for Kira already. She met Chris Harrison, host of ABC’s The Bachelor franchise, during the Miss America competition, and as a fellow “celebrity golfer” continued to see him at various charity tournaments. The two built a friendship, and earlier this year when Kira had her golf clubs stolen out of her car, her connection came in handy. 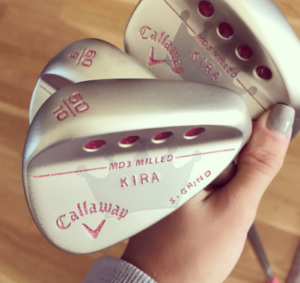 “When your golf clubs are stolen out of your car ;(” she tweeted. “Hoping the person who has them now is a scratch golfer and enjoys them. #FreeKirasClubs”

She was due to play in an event at Sherwood CC later that day, and Harrison saw the tweet. He connected her with Callaway, and the company sent her a new set that day.

“Not only that, but a few days later in the mail I received custom wedges with a Miss America crown and my name on them! It was the most special gift I’ve ever received,” said Kira.

While women like Kira and Paige unfortunately receive far too much unwanted negativity online, stories like that remind us all that not all interactions online are negative ones.

“I’ve chosen to live my current life in the public eye,” said Kira. “With that comes negativity. I just have to maintain a sense of positiveness about what I’m doing. I go through bad days where I wonder why I’m doing this. But this is my dream, I want to be in entertainment. I’m not going to let people take that away. Being able to overcome that through golf has opened up so many opportunities to me. The negativity helps fuel that fire. I’m going to show you how well I’m going to do this.”