A Culture of Creativity

How much farther can you go?

It’s the question on everyone’s mind at TaylorMade Golf. Whether it’s referring to golf ball distance or other technology thresholds, Brian Bazzel has been hearing some version of that question ever since the day he started in the company’s research department nearly 18 years ago.

And for that entire time, TaylorMade has had answers, sometimes coming from Bazzel himself as he’s worked his way through nearly every department of product creation. Now, with his recent promotion to vice president of product creation at the Carlsbad equipment giant, he’ll be expected to have the answer more than ever.

“We hear that question every year, and it’s a great question,” says the man known as “The Baz” to his co-workers. “But believe it or not there are always places you can go. There are always opportunities to improve our products despite the restrictions and regulations that are put upon us.

“Sometimes when you plow through one door of innovation, it’s like one or two more open that you couldn’t see before. Something you thought was impossible now is possible and you set a new goal. I’ve seen a lot of that, especially the last two or three years.”

Recent breakthroughs have produced such category leaders as the multi-material M2 Driver and the Spider Putter made popular by Jason Day. As 2018 and a new equipment season dawns, Bazzel promises more game-changing breakthroughs to come — but he isn’t tipping his hand just yet.

“We have some incredible technologies coming out that I can’t wait to tell the world about,” he says. “It’s going to be a significant year.”

In a way, it has already begun. The new equipment has already been tried and tested by TaylorMade’s armada of TOUR pros. Their feedback and input is a major source of inspiration for future TaylorMade product, so their buy-in and belief is critical. Thus, presenting product to TOUR pros is Bazzel’s most nervous moment of the year. 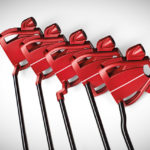 “It’s like your baby being born,” he says. “It’s the moment of truth.”

That moment can be three to five or even more years in the making. That’s how far out TaylorMade’s product planning and research and development extends. In actuality, though, a product’s life truly begins two years out when it’s put into a planning and production cycle.

Now more than ever, like an NFL general manager planning a draft, Bazzel will be the one making those decisions.

“We have several ideas that are three to five years out,” he says, “but you only have so many people and so much time, so you have to choose correctly. Some of those ideas will never see the light of day but you hope that most of them will.”

Bazzel is uniquely positioned to make those decisions in that at one time or another, he’s worked in every equipment category at TaylorMade. But upon announcing Bazzel’s promotion, TaylorMade CEO David Abeles especially lauded Baz’s work in metalwoods.

“For five years, Brian has been the driving force behind our metalwoods product creation team, creating groundbreaking products that have invigorated the industry,” Abeles said. “His vision has helped position TaylorMade as the industry leader in metalwoods innovation and performance. There’s no doubt in my mind that under his guidance, the TaylorMade brand will continue to see exceptional growth and forge a lasting position as an industry leader across all product categories.”

A LOVE OF GOLF FORMED IN THE FIELD

Bazzel played high school golf in Rancho Bernardo before going on to play at Division III UC-San Diego, where the team captured third in the NCAAs once during his playing days. He competed in SCGA amateurs and on the mini-tours before taking a caddy gig at The Farms Golf Club in Rancho Santa Fe.

A caddy client noted Bazzel’s knowledge and knack for the game and suggested a career in the industry. Armed with his playing experience and an electrical engineering degree, he embarked on a career with TaylorMade.

Bazzel’s love for the game was fostered by his step father, a scratch golfer. His step father’s influence has carried over to his design career in that he’s the audience that Bazzel says he has in mind when he’s creating a product.

His love for the equipment side of the game came later in his playing days, but he recalls clearly his first real set of clubs, which were TaylorMade irons he purchased at age 13 with money earned washing dishes.

“They were long irons, foam-filled, Tour-preferred,” he says with a smile. “I paid $300 and sold them for what I paid them. I wish I still had them. I was proud to have them and eager to hit them.”

That’s the emotion Bazzel, who is now a 0.7 handicap who plays out of Shadowridge CC, seeks to conjure now each year from golfers.

Thanks to advances in technology, the process of product creation has changed drastically during his time at TaylorMade, but the process of gathering ideas remains largely the same. He keeps his eyes and ears open at all times, especially when talking to TOUR players.

“You find inspiration everywhere,” he says. “The ideas we implement can come from anywhere. You’re always listening for insights, especially when we’re talking to our PGA professionals from around the world. But we have to be within the game and close to the game at all times so we hear those things.”

A DEEP UNDERSTANDING … AND A LITTLE LUCK

The objective for the staff of 15 that Bazzel now oversees is clear. 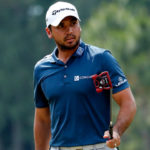 But for all the planning and research, Bazzel says it’s sometimes the staff who ends up getting surprised, as was the case with the Spider Red mallet putter that Jason Day rode to world No. 1 and has become popular on TOUR.

Day requested a few design tweaks to the original model, Bazzel tells, adding that the red color choice was Day’s entirely, a decision that he says initially drew skeptical glances from the staff.

“It looked a little different and funny,” Bazzel saya. “But then he starts making every putt on the planet and suddenly we can’t make them fast enough. So for all the planning we do, there are still some things you can’t plan for.”

The product was ultimately a triumph for the culture of TaylorMade, where each product category has a group leader, but Bazzel said that doesn’t limit the staff’s ability to contribute across product lines.

“Everybody fits the culture of TaylorMade, but yet is each uniquely skilled,” he says. “The talent in this building is incredible and there are no egos. We want people to feel like they can contribute anywhere at any time. We’re always willing to help each other because we’re all ultimately going after the same thing, which is to create the best-performing, hottest golf products on the planet.”